Advertisement
The Newspaper for the Future of Miami
Connect with us:
Front Page » Opinion » Partners float a heads-up idea for Miami-to-Beach transit

A display at a transportation summit last week laid out a tempting and innovative solution to unraveling Miami-Dade’s tangle of traffic woes.

After a two-team competition for cutting-edge solutions days earlier had unveiled a phone app to reward carpooling and transit use, a four-team consortium offered its own answer: aerial cable cars linking Miami to Miami Beach.

New to Miami, that is. The Miami Aerial Transit Partners team that is promoting the project tells us about 1,000 such systems float overhead globally. One is the only US public transit system that actually turns a profit: New York’s Roosevelt Island Tramway. One in La Paz, Bolivia, carries 40 million people a year, far more than Miami’s Metrorail does.

The team’s idea is a public-private partnership to run aerial cable cars from downtown Miami to Miami Beach, a system that they say would cost at most $350 million and be up in three years with a leg from downtown to Watson Island, with the second phase soon to follow.

One hundred gondolas would glide overhead, one arriving every 30 seconds at each station so there’d be no wait.

The theory is that tourists would flock to gondolas, as they do in New York and elsewhere, but extending the line to Miami Beach would lure commuters too. Promoters envision fares equal to county transit passes for regulars but $12.50 to $15 per ride for one-time riders.

Profits would flow in part from stations that offer more than just tickets. Naming rights for gondolas, stations and the system itself would help with costs – the team says an aerial cable system in London gets $5.5 million a year from naming rights alone. 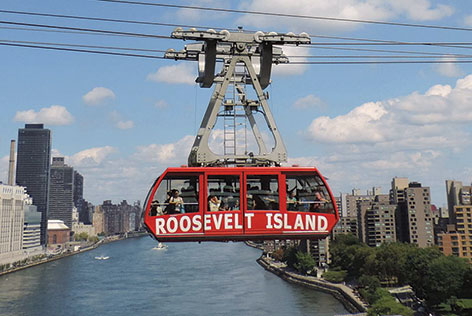 New York’s Roosevelt Island Tramway is the only profitable US public transit system.

The team plans an unsolicited offering of a public-private partnership to the county to provide Miami-Miami Beach transit in the Smart plan that is seeking transit lines in six corridors.

If chosen, the team would still face tall hurdles. Travel over water creates plenty of environmental and permitting issues. Plus, the team is cash short. It plans to approach those who’d be stakeholders to help.

Stakeholders abound. The first phase would run from Miami Central Station – home of the future Brightline rail line – to Bayside Marketplace and the AmericanAirlines Arena, then to the Adrienne Arsht Center for the Performing Arts and end up near Jungle Island on Watson Island. The later phase from Watson Island would follow the MacArthur Causeway to Fifth Street and Alton Road in Miami Beach – unfortunately leaving a vital gap to go north to the Miami Beach Convention Center.

The plan as is, however, would provide long-sought transit from Miami to Miami Beach at half or less the cost of any transit mode except Bus Rapid Transit, which is cost effective but would eat up already crowded causeway lanes.

Imagine possible private stakeholders. The team has spoken with Jungle Island, the Genting gambling consortium that plans hotels and resorts beside the Arsht Center and many others. The new railroad, the museums along the route, Bayside, the arena, the Arsht and more would benefit. Whether they’d open their wallets or be free riders is to be seen.

Then comes an investor pool. “It is anticipated that revenue from commuter fares, tourism riders and real estate development at the stations will be substantial and will repay the initial capital investment and annual [operating and maintenance] costs, and return a profit to the investors,” a brochures says.

We shouldn’t overlook this transit option.

Entry cost is low, construction is fast (promoters say they once set 50 towers for a ski cable system overnight via helicopters; try doing that for Metrorail), there’s no land or route to buy, and 100 employees can run it all – with no county transit drivers to call in sick.

It even saves energy – the 100-gondola system would use one 400-horsepower motor plus solar panels on each gondola.

It’s all great with every advantage – on paper.

Construction, however, would be fast only after cutting a multi-way deal with government agencies, financial partners and sponsors, plus after getting all the permits. As the Wall Street Journal noted Friday, government permitting for infrastructure averages 4.7 years – and involving Biscayne Bay, a city-owned island and downtown Miami might stretch that out.

Erecting the system itself, the partners say, would take at most two years, including fabricating every gondola and the cables in Europe and shipping them here, because nobody in the US makes either. It’s a European business.

But if it worked, think of the benefits.

Traffic is piling up fast on the causeway where gondolas would flow, says Jimmy Morales, Miami Beach city manager, who two years ago noted that the MacArthur traffic had hit 95,000 cars a day, up 7% in two years and growing. We calculate that 10- to 15-passenger gondolas on one version of the system could carry 40,000 people a day, 42% of all that traffic. The larger 30-person gondola version could haul everyone who now drives the route and then some.

If that’s not what the Smart plan of six transit legs is meant to do, what is?

We hold no brief for aerial transit. If you can spend less and more quickly bring real mass transit to link the mainland and Miami Beach, go to it.

But gondolas would no doubt be picturesque – far more than a fast bus. That would create a tourist attraction. And while the 30-minute glide from Miami’s new rail station to Miami Beach wouldn’t be breathtaking, there’d be no traffic delays – or, needless to say, as many delays for everyone else in cars or buses along the causeway.

Pitfalls lurk along the route to aerial transit, and it couldn’t help much of the county, but it’s a potentially elegant solution to crossing water for large numbers of people with no waits.

Whether the Miami Aerial Transit Partners are the team to run the system we can’t say. But they’ve had roles in hundreds of them, which in the US may make them the most experienced group around.

Just as carpooling is sensible to open up our roads, our Transportation Planning Organization – which several years ago seriously studied aerial gondolas – should look at them again as a slice of our transit solutions pie.