Advertisement
The Newspaper for the Future of Miami
Connect with us:
Front Page » Communities » Flagler Street apartments make a splash, but pool doesn’t 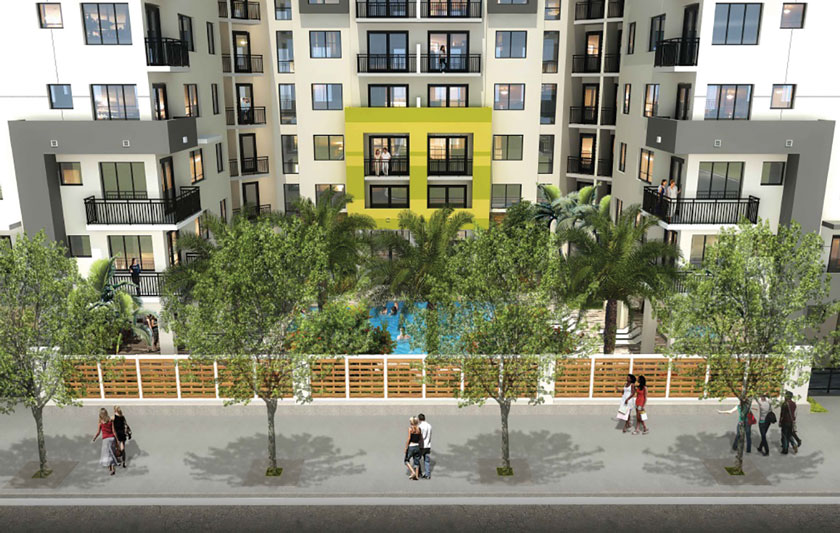 A new multi-family residential building is coming to a high-profile site on West Flagler Street in Miami.

Romagna Mia Realties LLC, the owner-developer of 2744, 2780, 2810 and 2828 W Flagler St., proposes Flagler Apartments, offering 208 dwellings in a 12-story building adjacent to a five-story parking structure with ground floor commercial uses. The garage would have space for about 330 vehicles.

The property is on the south side of West Flagler Street, just west of Northwest 27th Avenue and across the street from Miami-Dade County Auditorium.

Edward Martos, an attorney representing the developer, said the project is to include about 10% of the apartments dedicated for workforce housing.

“Flagler Apartments will bring new, high-quality residential housing to a part of our city that recent development booms have neglected,” Mr. Martos said in a letter to the city.

There’s been no new housing in this area in decades, he told the board.

The project is planned for a very busy section with good access to public transit, in particular Metrobus service, he said.

Mr. Martos pointed out the project plans have been modified many times since 2015.

The developer is requesting four waivers: a 3% reduction in required parking; a loading berth substitution; reducing the building setback; and 10% reduction in two-drive aisle width.

Beatriz Hernandez of MSA Architects detailed the design and site plan, noting the placement of a dog park in the back. The U-shaped residential building has an amenity area in the courtyard along Flagler Street that includes a ground-level swimming pool.

Review board Acting Chairman Dean Lewis said he wanted to vote in favor of the project but he viewed the pool on grade, facing north, as a negative.

He called the little fence designed between the pool and the public on Flagler “not good,” and suggested the pool be elsewhere.

Board member Fidel Perez agreed the pool belongs somewhere else.

“We’ll talk to the staff but we have to look at costs,” Mr. Martos said. “We are providing workforce housing and we are restrained by costs.”

Mr. Perez responded, “I understand, but this item hurts the whole project. You’re spending a lot of money already.”

Board member Gerald Marston posed the question: How important is the swimming pool to the success of the building? (Noting the small unit sizes).

“I know but …,” Mr. Marston continued, as a gathering place how realistic is it, he asked.

“I’ve got to believe not a lot of people would sit there in bathing suits [so close to Flagler Street],” he said. “There has to be a better use for the space.”

Mr. Bermello agreed. “You have a swimming pool that nobody’s going to use. You have to ask yourself, how important is it to the marketing … probably not a lot. I’d remove it.”

Mr. Marston made a motion to recommend approval with these recommendations: the developer consider removing the pool and putting a more appropriate activity next to the street; consider a connection on the ground level between the apartments and the garage that is covered.

The motion passed, with Mr. Lewis voting no.

One Response to Flagler Street apartments make a splash, but pool doesn’t