Advertisement
The Newspaper for the Future of Miami
Connect with us:
Front Page » Government » Florida Department of Transportation weighs five options for Kendall corridor 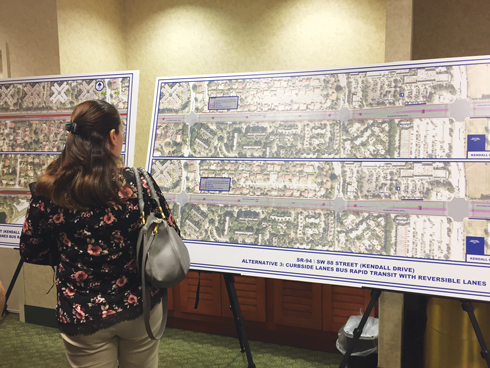 The Florida Department of Transportation is considering five transit alternatives for the Kendall corridor as part of the Smart Plan to broaden the county’s rapid transit web and expects to recommend one to the county Transportation Planning Organization by spring.

The state agency continues its project development and environment study as it continues to meet with stakeholders and agencies.

Since summer 2016 the department has worked to create a shortlist of transit alternatives for the Kendall corridor spanning from Southwest 177th Avenue to the Dadeland North Metrorail Station. The state is partnering with the Transportation Planning Organization and Miami-Dade County Department of Transportation and Public Works for the study.

The team analyzes design options, estimated costs and impacts to the surrounding community. The federal, state and local government would fund any one of the plans. “We’re at a second-tier analysis, looking at five alternatives,” said Alan Brick-Turin, Gannett Fleming general engineer who is a consultant on the project for the state transportation department. “We treat those all equally.”

The organization held workshops in December to present the plans and receive feedback from the public. The state transportation department hopes to hear more from residents before submitting its final recommendation.

Mr. Brick-Turin’s team measures each plan by several yardsticks, including how many people each mode of transit can carry and the cost.

“We’ll have a dozen different criteria and go back to saying how well are we meeting purpose and need,” he said. “Based on that, we can make a recommendation on what’s the best alternative. The best alternative could be to do nothing because the harm is worse than the good.”

Mr. Brick-Turin’s team plans to present a recommended alternative in the spring, and wait for the TPO to decide by the summer on the final plan of action.

One of the two modes of transit focuses on Bus Rapid Transit (BRT). Any of the options includes 16 stops from Southwest 157th Avenue to Dadeland North. The buses would provide service every 10 minutes during peak hours and every 20 minutes during non-peak periods. Each one costs $4 million to $6 million to operate and maintain.

The Florida Department of Transportation is considering the following BRT plans:

Curbside lanes BRT: The design offers ample space for bus stations. It provides five-foot-wide bike lanes. The estimated travel time clocks in at 31 minutes. The plan has a capital cost of $160 million to $200 million.

Median lanes BRT: The design utilizes median openings and left turns. It also offers 5-foot-wide bike lanes. The travel time is 25 minutes. The Florida Department of Transportation estimates 7,300 to 8,100 daily riders would use this option. The plan has a capital cost of $200 million to $240 million.

Curbside BRT with reversible lanes: The transit lanes would be shared with right-turn lanes and local buses, but not include bike lanes. The transit time would be 31 minutes. The daily ridership is estimated at 6,000, and the estimated capital cost ranges from $250 million to $290 million.

The state team is considering Metrorail as another option. Mr. Brick-Turin said, “The advantage to Metrorail, whether it’s in the air or on the ground, is you can get on Kendall Drive and get to Government Center without changing vehicles.”

The final two alternatives both offer service every nine minutes at 11 stops between Southwest 157th Avenue and Dadeland North. The operation and maintenance costs for either option range from $16 million to $24 million a year. The distinguishing characteristics between the Metrorail at-grade and elevated options are:

Median lanes rail: The at-grade option may require both intersections to pause when passengers board. The station offers six cars that would serve 11,600 to 12,900 daily riders. The design provides enough space for 5-foot-wide bike lanes. Transit time clocks in at 18 minutes. The capital costs range from $1.1 billion to $1.4 billion.

Elevated rail: Provides sufficient space for 5-foot-wide bike lanes. The elevated rail shortens transit time to 16 minutes. The estimated daily ridership would be 11,700 to 13,000. The capital costs estimates range from $1.6 billion to $2 billion.

“Any of these transit alternatives creates additional traveling capacity,” Mr. Brick-Turin said. “Traffic will be better in the future with transit than without.”

The public voiced numerous concerns about the construction of one of these plans during the last workshop.

Pablo Aguilar, a realtor for Realty World M. Realty Group, and Rose Mary Reboucas-Aguilar reside in the area and said none of these options would accommodate their lifestyle that includes work and caring for elderly parents.

“This is just not an option that I would use even for personal use on a weekend,” Mr. Aguilar said. “I like the flexibility of my car.”

The couple, nearing retirement, fears how any of the options might disrupt their daily routines and decrease their property values.

“The problem for us is the construction of any of these projects,” Ms. Reboucas-Aguilar said. “They’re going to have to close the sidewalk and at least one lane. That would mean Kendall Drive would be two lanes, which would be a nightmare.”

Ms. Reboucas-Aguilar said that forced to choose between the two, she would prefer a BRT to a Metrorail option. The couple both expressed concern about the noise and vibrations caused by a Metrorail as well as the possibility of the station attracting homeless seeking shelter.

“My biggest concern is how this is going to affect my property value,” Mr. Aguilar said.

Despite not being fond of the options, Mr. Aguilar recognizes a need for a transit solution. “I think we need to do something. The congestion on Kendall is horrendous.” But he prefers other options to be on the table.

The Florida Department of Transportation welcomes residents to voice their concerns and ideas. Project Manager Teresita Alvarez said, “This is the time to come and give us your suggestions. We want to get it right for the money we’re investing.”

Ms. Alvarez’s team urges calls to the community outreach representative, Jeannette Lazo, at (305) 573-0089 or in writing to Jeannette@iscprgroup.com.