Advertisement
The Newspaper for the Future of Miami
Connect with us:
Front Page » Arts & Culture » Curtain lifted from Coconut Grove Playhouse battle details 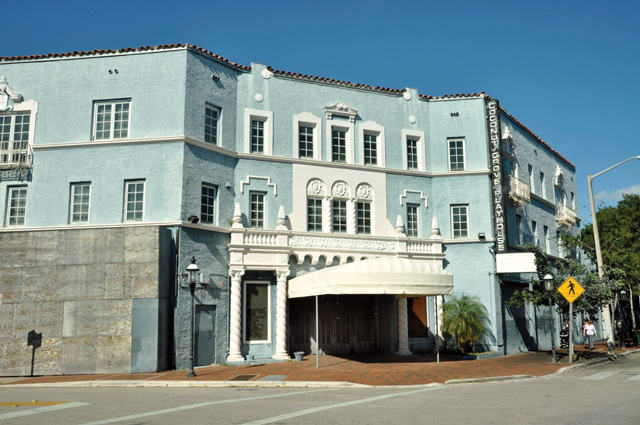 As a county commissioner plans to unravel the negotiated lease and adopted restoration plan for the Coconut Grove Playhouse, preservationists fighting to save the entire building are claiming a victory at the city level.

Immediately after a Dec. 14 vote by Miami city commissioners, the one clear fact was that a third party was getting more than three months to raise additional millions to restore all of the closed and dilapidated playhouse, including the 1,100-seat auditorium.

Yet the city commissioners were being asked to decide a very specific matter: an appeal of the city historic preservation board’s April decision conditionally approving the county’s plan, which includes partial demolition to replace the auditorium.

The city’s Dec. 14 action was on a motion made by Commissioner Ken Russell, whose district includes the Grove.

Within the past week, Mr. Russell’s office released a copy of the written motion, prepared after the fact by the city attorney’s office.

The document offers more clarity to the Dec. 14 vote that garnered three yes votes and two no.

The state-owned theater is leased to Miami-Dade County and Florida International University; the lease calls for site restoration and a modern 300-seat theater run by GableStage.

Attorney and arts supporter Mike Eidson is pushing for two theaters there, a 700-seat venue for major productions and a small companion theater.

A key to Mr. Russell’s motion granted Mr. Eidson 100 days to come up with enough additional cash to build two theaters at the site on Main Highway.

The county’s Department of Cultural Affairs is working on the restoration project and maintains a website to keep interested parties updated. Those officials have also been waiting for specifics from the city.

The document from Mr. Russell’s office begins saying it is a resolution of the city commission “granting in part and reversing in part” the appeal filed by Barbara Lange and Katrina Morris of the decision of the historic preservation board approving a special certificate of appropriateness for the partial demolition of an existing structure, the reconstruction of a theater, and the new construction of a parking garage with residential units at the individually designated historic site known as the Coconut Grove Playhouse.

The resolution says the preservation board, at an October 2005 meeting, designated the entire exterior of the playhouse as a historic site after finding it met the specified criteria in the city code.

Based upon testimony and evidence presented Dec. 14, the commission grants in part and denies in part the decision of the preservation board and modifies the special certificate of appropriateness, it reads.

The theater portion of the playhouse shall be developed with a minimum of 600 seats, which number of seats, while it presents a compromise and reduction from the traditional seating, is more in keeping with the historic number of seats in effect during the active operations of the playhouse as a renowned and celebrated theater. This subsection is subject to the funding contingency stated below. If the funding is not timely and fully obtained as required by this resolution, the theater seating will automatically revert to not less than 300 seats.

The parking garage and other non-theater structures in the rear of the property shall be recessed from Main Highway so their visibility is minimized. The garage and other non-theater structures will be redesigned so as not to overwhelm the playhouse in height, massing, or intensity and shall be in harmony with the playhouse and the surrounding neighborhood. The applicants may consider removing a floor, undergrounding a floor, or undergrounding the entire garage to accomplish this measure.

If, by March 24, 2018, a minimum of $20 million is not pledged for the larger, 600-seat theater, as shown by existing funds (cash or its equivalent) in customary financial documents to the satisfaction of the city manager or his designee, then this subsection and the first condition shall automatically Sunset and be of no further force and effect, and will be deemed void due to failure to have that required funding secured. The theater portion of the playhouse shall then be developed with a minimum of 300 seats.

The owner shall protect, restore, and maintain the solomonic columns, proscenium arches, and cherubs currently present in the interior of the playhouse.

The owners and agents are to preserve the entire playhouse structure. At a minimum, the exterior shell of the theater, along with the decorative features mentioned, should be preserved for the community, patrons, and for future generations, due to it meeting the applicable criteria of Chapter 23 of the City Code.

The county has $20 million in approved borrowing to revive the theater. Mr. Eidson’s plan has an estimated $45 million cost.

Mr. Russell hopes to secure about $10 million to devote to the playhouse from a wider bond issue that city voters approved in November.

He had a proposal ready for a vote in mid-December, but the meeting was apparently cancelled.

The preservationist group, Save the Coconut Grove Playhouse, says the item will be on the agenda of a Parks and Cultural Affairs Committee meeting set for Jan. 18.

Miami Today has been unable to confirm this, and Mr. Suarez has not answered several emails regarding the playhouse.

In related news, the city commission is to be asked today (1/11) to back a move to place the playhouse on the National Register of Historic Places.

The theater has sat deteriorating since it closed in financial distress in 2006.