Advertisement
The Newspaper for the Future of Miami
Connect with us:
Front Page » Top Stories » South Florida among fastest in US in job gains

South Florida among fastest in US in job gains 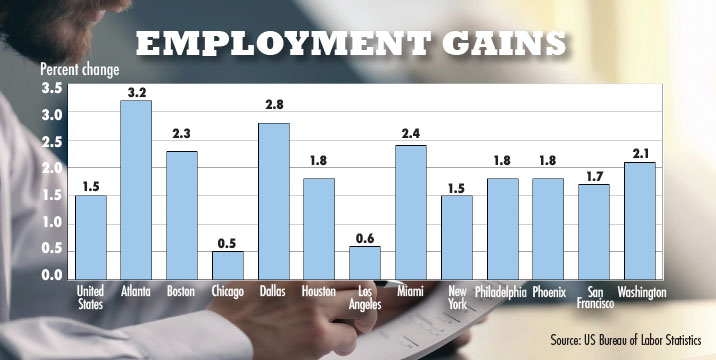 South Florida tied for the second-fastest rate of job growth among the nation’s 12 largest metropolitan areas in October, with 62,000 added jobs increasing the area’s total by 2.4%, the US Bureau of Labor Statistics revealed last week.
That gain far surpassed the national growth of 1.4% and trailed only the 2.7% job growth in the Dallas area. The Atlanta area also added jobs at a 2.4% rate.
The gain brought total jobs in Miami-Dade, Broward and Palm Beach counties to 2,668,200.
Miami-Dade, with 45% of the area’s employment, added 27,900 jobs, a gain of just a tick over 2.3%. Broward added 25,200 jobs and Palm Beach added 8,900.
Among the categories of jobs, education and health services had the largest increase in the three-county area, adding 18,000 jobs, with the largest gain in the area being 9,800 in the Fort Lauderdale area. The sector’s 4.7% growth in South Florida was far higher than the national increase of 2%.
Trade, transportation and utilities had the second-largest year-over-year increase over the 12-month period, growing by 8,600 jobs, which was a 1.5% gain. Nationally, the same sector rose just 0.4%.
Also gaining large numbers of jobs in the three-county area were professional and business services, adding 7,700; other services, adding 7,600; and construction, adding 7,500.