Advertisement
The Newspaper for the Future of Miami
Connect with us:
Front Page » Real Estate » 53-story apartment-hotel-office tower in Omni area OK’d 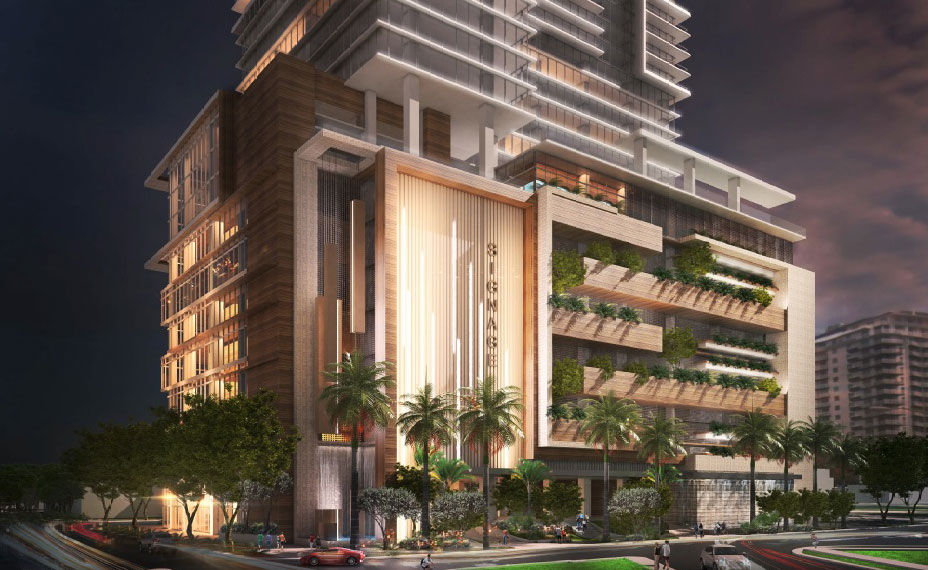 A major residential-hotel-office tower is planned for the heart of the Omni neighborhood fronting Biscayne Boulevard.
Owner-developer V-Downtown Inc. plans a 53-story building at 1775 Biscayne Blvd. that will offer 200 hotel rooms, 444 residences, about 45,600 square feet of commercial space and 64,800 square feet of office space, rising from a parking pedestal for 546 vehicles.
The city’s Urban Development Review Board recommended approval of the project at a special meeting last week.
The site is just north of the Hilton Miami Downtown and across the street from a Publix. Margret Pace Park on Biscayne Bay is about a block away.
Part of the commercial floor space will be more than 14,000 square feet of ground floor retail, and the building will be topped off with a 7,000-square-foot solarium. The maximum height will be 633 feet.
An amenity deck for the residences will be separate from the amenity deck for hotel, office and retail uses. The lower amenity deck allows for public use, giving residents and visitors access to views of Biscayne Boulevard and Biscayne Bay.
Project architect Kobi Karp told the board the project is designed to create pedestrian movement all around the block.
The hotel rooms will be in the lower levels and the rental apartments rising above, he said.
Loading and unloading will be from a platted public alley on the property.
In a letter to the city, the developer’s attorney Vicky Leiva said the project is in keeping with the context of the neighborhood, and the proposed tower has been carefully designed to allow uninterrupted views to the bay.
“The frontage along Biscayne Boulevard complies with all setback requirements of Miami 21 [zoning code]. Drop-offs for the building are internal and located on the secondary frontage along NE Fourth Avenue and take advantage of existing curb cuts. Loading and delivery will take place completely internal to the site accessible from the alley, which runs east to west at the north end of the property and has been widened with land from the private owner to allow for such use,” Ms. Leiva wrote.
The developer is requesting six waivers, including:
nUp to a 30% reduction in required parking spaces due to the proximity to the transit corridor along Biscayne Boulevard, the Omni Metromover Station and Bus Depot.
nAllowing parking to extend into the second layer beyond 50% of the length of the frontage. A glass treatment would be provided for that portion of the secondary frontage (western elevation) to be approved by the planning director.
nAllowing a floor plate of 19,800 square feet for residential uses where 18,000 is permitted.
nAllowing for lot coverage of 88% where 80% is permitted.
Board members generally liked the look of the proposed tower.
Fidel Perez said the building is well designed. He voiced concerns about reduced parking and said vehicle circulation in the alley “seems very tight.”
Mr. Perez asked if there is enough room in the alley for big trucks to maneuver. Mr. Karp said yes.
“On a positive note, you’ve done a great job on the [parking] podium. That can be difficult to put together,” Mr. Perez said.
Review of the project led board member Neil Hall to voice concerns about too much growth and its impact on traffic.
He asked Ms. Leiva: Why should the city cut parking requirements 30%?
She said the zoning code allows such a reduction, in part to encourage public transit use and shrink the size of parking pedestals on high-rises.
“Every time we come here we’re waiving items. Just once I’d like to see an architect come here with a plan saying ‘I can live within the rules,’” Mr. Hall said.
Waivers are an administrative decision, but Mr. Hall suggested the review board look at proposed projects in a context that includes many factors, including its impact on traffic.
“If we cannot affect those things, it’s a waste of time,” he said.
Ms. Leiva disagreed, saying the board has plenty of influence.
“You do have tremendous power,” she told board members. She said she’s seen developers and architects listen to detailed reviews from the board and change their design, making projects better in the long run.
Newest board member Ignacio Permuy congratulated Mr. Karp on a “beautiful design.” He also said he likes the plan for a dockmaster’s office for a smooth loading and unloading operation.
Acting Chairman Anthony Tzamtzis said it is a very well designed building but “excessive.” He added, “I like the architecture, but you’re stretching the options for this area… there’s a lot of stuff here.”
He cast the lone “no” vote on the tower’s recommended approval.