Advertisement
The Newspaper for the Future of Miami
Connect with us:
Front Page » Top Stories » Frost Museum of Science passes half-million visitor mark 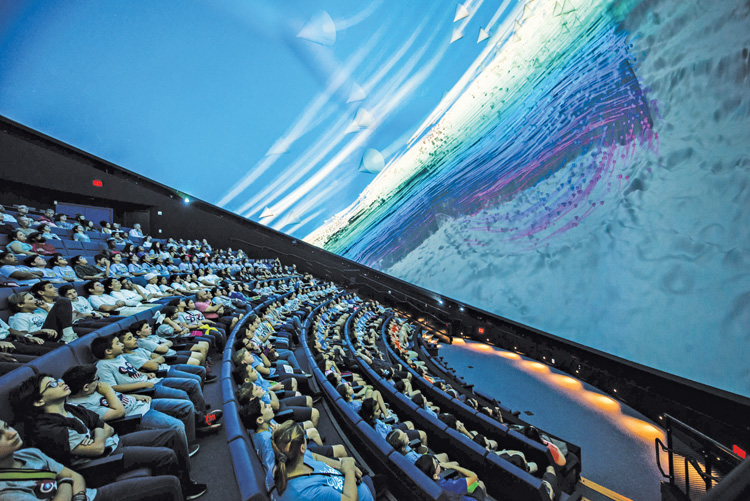 After opening its doors to the public sixth months ago, the Phillip and Patricia Frost Museum of Science has seen strong attendance, a spokesman said, resulting in an expansion of its planetarium shows and exhibitions.

“We’ve had an extremely strong response and warm welcome from the community,” said Rebecca Dorfman, a public relations manager at the museum. “Our visitor numbers from opening through Oct. 31 were 529,800.”

As for meeting attendance expectations, she said, “We never really set specific metrics on how many visitors we expected in the first year, but we’re thrilled with the number of attendees.”

As a result, the museum has added a new planetarium show and two new exhibitions to its traveling gallery spaces.

“Since opening, we’ve added one more planetarium show and welcomed two new exhibitions in our traveling gallery spaces, which include, Brain: The Inside Story and Monster Fish: In Search of the Last River Giant,” she said, “both of these exhibitions will be open through Spring 2018.”

Beyond this, she told Miami Today, the museum has expanded its ‘Laser Fridays’ programming to the first and third Friday of every month instead of just one Friday night per month, and has added shows such as Queen and Beyonce to its lineup.

In regards to the museum branching out into the community, she said, “Frost Science was just selected by the National Fish and Wildlife Foundation and Wells Fargo as one of eight non-profit organizations nationwide to receive a grant aimed at increasing community capacity to plan and implement coastal resilience projects and improve the ability of urban coastal communities to adapt to sea level rise.”

Looking forward, she said, the museum plans to continue focusing its efforts on sharing the power of science, sparking wonder and investigation, and fueling innovation for the future through its interactive exhibitions, unique shows and projects.