Advertisement
The Newspaper for the Future of Miami
Connect with us:
Front Page » Government » Largest trade delegation ever, 117 people, visits from France 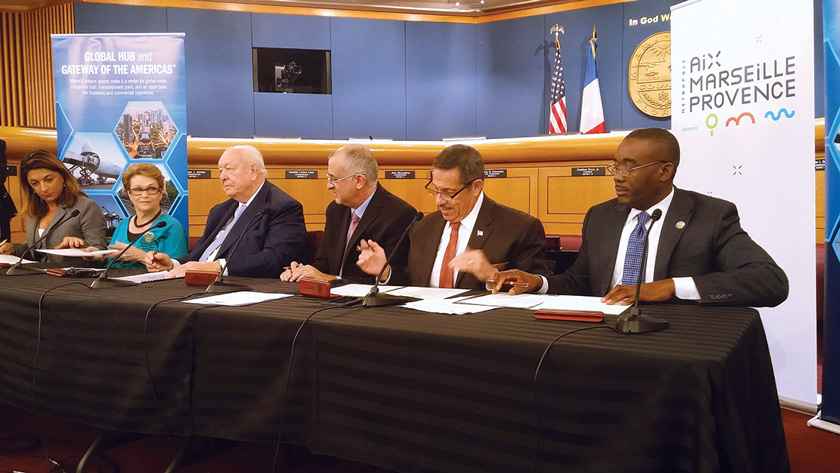 Miami-Dade County has added a new partner, signing a sister city agreement with Aix-Marseille-Provence Metropolis, city of Marseille, France, on Monday to usher in a cooperation agreement where the two regions will begin a partnership for economic and tourism programs.

The signing came on the second day of a French delegation’s six-day trip that brought 117 participants, all from Marseille, including the mayor. It was the largest delegation from abroad that Miami-Dade County has hosted, officials said.

“We work hard to engage our international partners, forge a friendship that goes long beyond a business, but in many cases, a personal relationship,” Esteban Bovo Jr., county commission chairman, said at the Stephen Clark Government Center where the signing took place. “We want to have good business, good economic opportunities between our two cities.”

The official visit is a direct result of a Miami-Dade business development mission to France in 2015. After visiting Marseille in the south of France, delegates felt a kinship with a city that excels in its port and tourism industry in Europe. They have worked together ever since towards signing the sister city agreement.

The delegation came during the annual French Week, which aims to provide cultural awareness in Florida. Apart from a list of events, the French delegates’ visit was part of their city’s strategic international development to create opportunities in a new market. Mayor Jean-Claude Gaudin praised Florida for having the fourth-strongest economy in the US.

“We want to develop close collaboration on industries that can benefit us both,” Mr. Gaudin said. “We have strategic sectors we can work together on that will have high potential for both of us.”

Both areas excel in similar economic sectors. Marseille offered three roundtable talks on its port industry, which panelists said is the second-best in the Mediterranean, a thriving tourism industry, and a strong health sector.

“There is a lot of similarity between our two ports, so it was obvious we could benefit from this synergy,” said Christine Woehrel, CEO of Marseille Fos Port Authority. “On this trip, we can exchange best practices such as how to develop port business on one side and how to make it more sustainable in our cities.”

Forty companies from Marseille met local counterparts in 200 business meetings organized by the French American Chamber of Commerce of Florida. Topics included how to start and open a business in Miami and Marseille, creating new business partnerships, and the process of getting a work visa.

“We have companies here with the French mentality and understanding of the US market, providing insight for this delegation,” said Chloe Eck, business development consultant for the French American Chamber. “It’s important to learn about the legalities, since France never had any work visas. Our companies here can be that guide.”

Julian Guedj, president of Color Bus in Marseille, a sightseeing tour bus, came to Miami with the delegation to learn from the “tourism experts” and said that the sister cities signing creates more opportunities, such as opening a branch in Miami.

“We have a lot to learn from how Miami operates. They have many tourists, and they work heavily with the cruise industry, like we do,” Mr. Guedj said. “They have professionalism here, and I know we can collaborate on how we both work.”