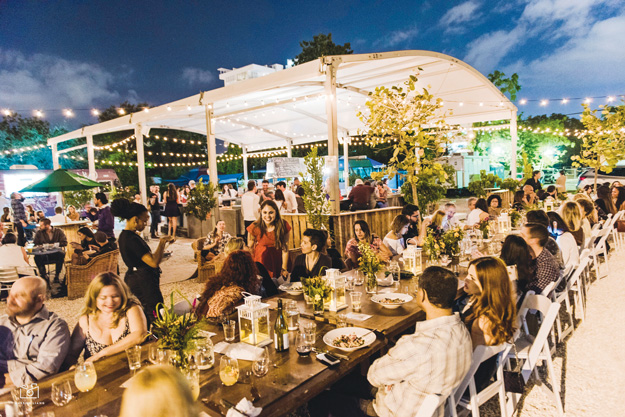 City commissioners approved the ordinance amendment after a first reading in September. The final vote has been deferred to December.

The Wynwood Yard is a hub of food and culture at 56 NW 29th St. in the heart of Wynwood.

The collection of business start-ups describes itself this way: “The food yard, events-and-live-music venue and all-day hangout space brings locals a smorgasbord of food, fitness, music and other cultural activities.”

Della Heiman, founder of The Wynwood Yard, describes it as a culinary incubator and a community hub.

She spoke to commissioners at the first reading of the legislation and thanked Chairman Keon Hardemon for sponsoring the measure.

The amendment would modify the requirements for temporary uses on vacant land, and the proposed ordinance notes the growing popularity of pop-ups.

“The increasing popularity of temporary uses on vacant land has exposed challenges for code compliance and a lack of flexibility for businesses, and [the city] wishes to promote activation of vacant lands to prevent blight within the community while maintaining proper enforcement measures,” it says.

Temporary uses and occupancies are of limited duration on private property or public properties and require special review by the city zoning administrator.

The proposed amendment would add the term “food service establishments” and “recreational,” to that section of the zoning ordinance.

Any intensive commercial or industrial use or occupancy is strictly prohibited, unless expressly allowed by the zoning ordinance.

Currently, temporary uses and occupancies are limited to six months but may be extended administratively by the zoning administrator in six-month increments for up to two years.

The amendment would extend the times this way: “…a limited duration of one year and can be extended annually administratively by the zoning administrator for a maximum of three years.”

The proposal would also add this provision: “Temporary uses on vacant land may be further extended beyond the three [year] maximum by City Commission.”

Ms. Heiman, who founded The Wynwood Yard in 2015, told commissioners it has become a launch pad for entrepreneurs in the city to test out their concepts as part of a collaborative community and, ultimately, scale and grow within the culinary ecosystem in Miami.

She said 16 culinary tenants work in the space.

“We have about eight tenants that have either moved to brick and mortar permanently or are in the process of doing so,” she said.

As a whole, the site cumulatively employs about 120 people, and runs about 30 events out of the space every week.

“They’re all in the areas of art, culture, fitness, culinary education. We do a lot of children’s education programming, wellness and sustainability programming,” said Ms. Heiman.

The site also has the largest edible organic garden in Miami-Dade County, home to a lot of classes focused on sustainability, cooking, and health and wellness.

He said several tenants have gone from operating temporarily at the yard to becoming a brick-and-mortar business elsewhere.

“It’s happening right now with several other tenants, including myself … this culinary incubator is taking small start-ups and giving them the room to grow and become more permanent. It’s a very interesting exercise, and I think it’s very much needed,” Mr. Lyon said.

In many cities, it’s often difficult to start a new business from scratch, he said.

“So this temporary use permit that we’re working under is succeeding very well, and we think that by continuing it, more and more businesses will be able to be brought forward … we’ve seen an amazing community built there,” he said.

Mr. Lombardi said he’s been developing Wynwood since 2001 and he sees the neighborhood as “a place where the little guy or girl can hang a shingle and start a business and maintain a business.”

Mr. Lombardi said Ms. Heiman met him about three years ago, wanting to do a traditional brick and mortar business.

“And after we explained how expensive that would be for her concept, we talked about this vacant parcel of land that I had on 29th Street, where we were growing vegetables and herbs, and we had one single food truck.

“And I discussed with her where I thought this could go, and it could be an incubator for young entrepreneurs. It could be almost a food court. We could program, have music, events, yoga. And she took the ball and ran with it and has done an amazing job,” Mr. Lombardi said.

He said The Wynwood Yard is a microcosm of the Miami community; every demographic is represented.

“It’s also almost like a public park, where young families come, and the kids run around, and they listen to the music,” he said.

“In an area where we’re growing by thousands of vertical residences right now in Midtown, Edgewater and Wynwood, there is no real public park in that particular area, and this has become the de facto place…”

Mr. Lombardi said the yard is the best example of what a temporary use permit is for.

Hand-picked culinary concepts, along with The Bar at The Yard and a garden by Little River Cooperative, are anchored within the outdoor setting.

Charcoal Garden Bar + Grill is the first full-service restaurant at The Yard, and the only one in Miami built out of modified shipping containers; it features seasonal, charcoal-grilled food and a bar.

Other concepts at The Wynwood Yard include the soon-to-open Support Local Market curated by Prism Creative Group and offering hand-picked home, clothing and accessories created by a bi-monthly rotating roster of  local artisans and small businesses; Radiate Miami, a one-stop source for natural living and healthy eating offering kombucha, food and natural beauty products; and LivBox, a prototypical container home by design startup Wyn-Box available as a showroom for potential buyers, as well as event rentals.