Advertisement
The Newspaper for the Future of Miami
Connect with us:
Front Page » Communities » Water Taxi Miami looking to expand 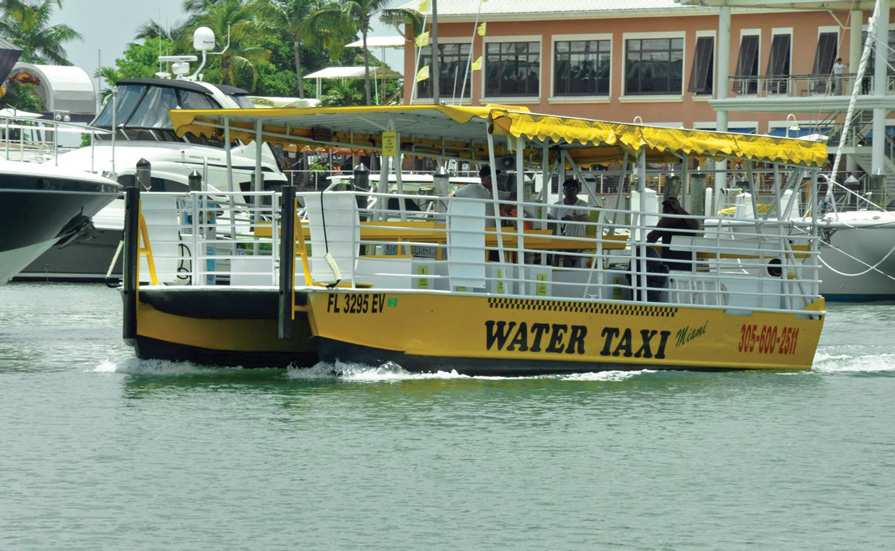 After adding a new stop at Purdy Avenue this year, Water Taxi Miami is looking to expand its water-borne transportation service by adding new stops in Brickell and Brickell Key.

“We added a new stop at Purdy Avenue earlier this year during the beginning of 2017,” said Jessica Hernandez, manager at Water Taxi Miami. “Right now, we have several locations in the process of being reviewed, but are primarily hoping to add new locations in Brickell Key and Brickell.”

However, she said, the process of obtaining new stops isn’t easy and takes a long time to gain approval from the city.

Looking forward, though, she said, these new stops would add to the water taxi’s yellow, green and blue routes, providing guests with more transportation options.

As for the water taxi’s current number of boats and fares, Ms. Hernandez said, “we have three commercial vessels that can accommodate up to 38 people and have approximately six fares a day, 180 fares per month and 2,000 fares a year.”

A large portion of those fares, she said, are attributed to the water taxi’s ‘fun’ and ‘unique’ bar hops, island hops, Halloween bar crawls and discounts.

“We currently have a bar hop at night,” Ms. Hernandez told Miami Today, “which takes guests to American Social on the river, Whiskey Joe’s on Key Biscayne and Mike’s in downtown Miami.”

The water taxi’s island hop allows guests to jump on different islands and spend the day exploring areas such as the Picnic Islands, just north of Biscayne Island in Biscayne Bay.

As for celebrating the Halloween season, Ms. Hernandez said, “our Halloween bar crawl is very popular and a lot fun. We shuttle guests from one location to another, offer them a welcome drink and stop along the way at Mambo’s, Whiskey Joe’s and American Social and head back to Bayside, where guests can go to the Mojito Bar.”

Another way the water taxi attracts a lot of its guests, Ms. Hernandez said, is through its discounts.

“Currently, we offer discounts for locals, military personnel, police officers and firefighters,” she said, “and we also offer a discount for guests who purchase an all-day pass and have a partnership with the Miami Heat, where guests who purchase a ticket during one of the home games can jump on the water taxi and head to the AmericanAirlines Arena for a discounted price.”

Looking forward, she said, “We hope to add new stops and continue adding to our different routes so that we can offer guests more transportation options.”