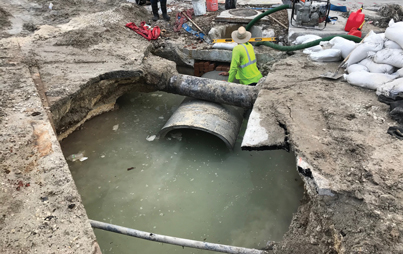 The hurricane did affect the timeline, said Ivette Ruiz-Paz, a communications specialist at the Florida Department of Transportation for District Six. However, the project is still scheduled to be completed by next summer.

As a result, the department’s construction team, which oversees the project, plans to work simultaneously at each location to reach its goal of completing construction within a year.

Changes to Biscayne Boulevard include:

In regards to dealing with excess traffic due to construction, Ms. Ruiz-Paz said, “work is being performed in phases in order to minimize impacts to the general public and the timing of the traffic signals within and near the project area will be continuously studied throughout the life of the project to ensure that they are optimized.”

Traffic shifts will also be performed to establish permanent work zones and reduce the number of travel lanes.

As a result, temporary lane closures may occur during non-peak hours on non-event days, nights and weekends from:

“Travel lanes and sidewalks will be closed at times for safety reasons,” said a memo from the transportation department. “Temporary lane closures during non-peak hours will have minimal effects on traffic. Access to and from neighborhoods and businesses will be maintained during construction.”

As a result, the memo adds, motorists in the area should “allow extra time to reach [their] destination.”