Advertisement
The Newspaper for the Future of Miami
Connect with us:
Front Page » Healthcare » Did Virginia Key become Irma’s dumping ground? 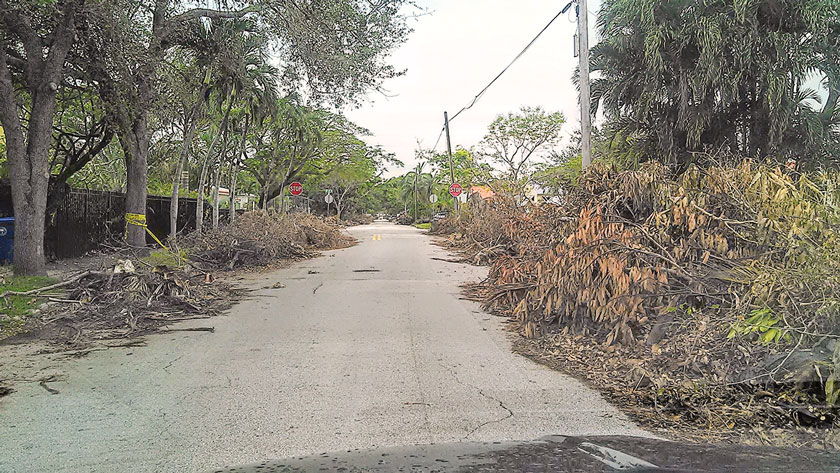 Years ago, the barrier island known as Virginia Key was literally a dump, final resting place for everything from empty soup cans to broken chairs, tires to tree limbs.

The remnants of dredging also got deposited on the island.

Decades passed, policies and priorities changed. The old landfill was capped. A new focus emerged for the future of the island.

A big part of this new approach to caring for and improving the island was the creation last year of the Virginia Key Advisory Board.

Some board members are upset because new piles of debris are being deliberately dumped on the island, and they fear the growing mountain of refuse could last a mighty long time.

City of Miami officials assure all who ask that the debris dump is temporary, yet the piles grow while tons of storm debris continue to hug the edge of city streets, more than four weeks after Hurricane Irma tore up South Florida and beyond.

The issue came up toward the end of the last advisory board meeting Sept. 26.

Board member Blanca Mesa asked city officials about the status of storm debris being dumped on the island.

“What’s happening with that?” she asked, citing a toxic nature of some of the truckloads of debris that are contaminated with household garage.

She also said police are blocking access to portions of the city-owned island, including closing Arthur Lamb Jr. Road to all but the large trucks bringing debris to the north end of the island.

“The number one focus is removing the storm debris from the streets, and debris from the yards,” said Kevin Kirwin, director of the city parks department and an ex-officio member of the advisory board.

A former mulching site on the island, used in previous hurricanes, has been employed again, he said.

The ultimate goal is mulching the vegetative debris from Irma and gradually using the end product in parks throughout the city.

Because the island site had been used for this in the past, it was tapped for the latest deposit and mulching, said Mr. Kirwin. Before the storm, state environmental officials tested the site and certified or approved of its use, he said. Once the site is cleared, it will be tested again by the state, according to Mr. Kirwin.

“It’s only for vegetative debris. Unfortunately, we’re having to filter out construction and other debris,” he said.

City officials have been trying to spread the word for weeks about not mixing household trash or non-storm-related trash with storm debris.

Commissioner Ken Russell, whose district includes Virginia Key, posted a video on his Facebook page urging people not to mix the trash.

“The South of Flagler team is taking roadside debris to the old mulching and compost grounds at Virginia Key. This is not for garbage, food waste, plastics or construction debris. It is being done with environmental sensitivity while addressing the crisis at hand,” he said in the video.

Mr. Russell has also been using his district newsletter and his Twitter account to keep the public up to speed on storm clean-up efforts.

In the late afternoon of Oct. 5 he tweeted: “The UPDATED amount of debris collected in #Miami to date is 244,334 cubic yards by contractors and @MiamiZerowaste & Public Works crews.”

Ms. Mesa told Mr. Kirwin she was concerned about Virginia Key being considered for this debris removal and she worried about big piles of garbage attracting rats and other unwanted activity.

“I think of all of Virginia Key as a park, all of it. This certainly wouldn’t happen in Regatta Park,” she said, referring to one of the city’s newest parks in Coconut Grove.

Mr. Kirwin responded: “The garage and non-vegetative material we will ensure is taken off the site promptly. I’m the last person who wants to turn a park into one of these [debris] sites.”

Ms. Mesa told Miami Today this week: “I would like to see a day when Virginia Key is no longer considered the go-to location for garbage – even temporarily. It is an ecological treasure and public park and should be treated as such.”

The roadway did have to be closed to clear the way for the 300 to 500 trips made by haulers each day, Mr. Kirwin told the board.

Closure of the road and the hundreds of trips made by the large trucks has seriously impacted one contractor who leases a trailer on the island from the city for recreational sports.

Esther Alonso-Luft operates the Virginia Key Outdoor Center from an upland site at Shrimper’s Lagoon, near the old Jimbo’s location.

Ms. Alonso-Luft is also an appointed member of the Virginia Key Advisory Board.

She told Miami Today, and city officials, she fears for the continuation of her business.

Ms. Alonso-Luft said not only did her location not suffer storm damage, it continued to have power after the storm passed.

But the closure of the road for the parade of debris haulers means her business is closed, too. She also complains that the heavy trucks are damaging the narrow road and land on the sides of the road.

“Everything I have, everything I own, has been invested into growing that business,” she wrote in a response email to Miami Today. “If my business failed because I had a bad business plan or because people didn’t like the services I was offering, I would understand that failure. For my business to fail because the city decided to turn this wonderful park into a dump is beyond alarming … I fear this area will be forever changed. Lost to poor planning and callous disregard for our open spaces,” she wrote.

“I do have to thank Daniel Rotenberg and Mark Burns from real estate and asset management who have gone out of their way trying to facilitate a way for me to operate. Currently I am at Marine Stadium under permit, in the former Captain Eddie’s storefront. Unfortunately this is only good through Nov. 30,” she said.

Ms. Alonso-Luft said she doesn’t know what the future holds for her business.

“But I’m a fighter and my customers love what we do, so I will do the best I can, as long as I can, and hope people find us wherever we end up and once we return.”