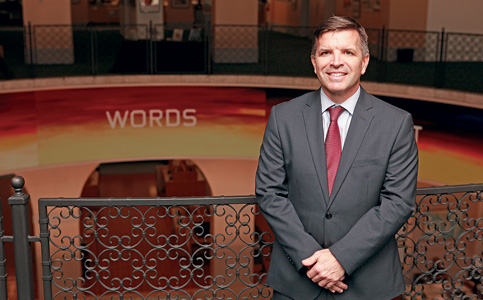 Ray Baker has been working in various Miami-Dade County departments for over two decades.

Before joining the library system, he had several positions including chief of policy, legislation and business services for the county’s Internal Services Department and also served in the county’s Executive Offices and the Office of Management and Budget.

A lot of his prior positions were more inwardly focused and not as much outwardly focused as the library, Mr. Baker said.  One of the things he enjoys about working in the library system is a direct public impact that he didn’t have the opportunity to experience in other roles.

Libraries are just as important, if not more so, than they were 25 years ago, Mr. Baker said. He has seen literature going back as far as 1973, long before the onset of the Internet, that was predicting the doom of libraries, and he still hears from a lot of people asking why libraries are relevant.

Mr. Baker said the library system is still checking out 300,000-plus physical items a month and that’s not even counting the digital side, so he struggles to understand how it will become less relevant. One of the biggest challenges is dealing with the types of formats and platforms that people want to have, as well as easy access to the library, he said.

Miami Today reporter Susan Danseyar interviewed Mr. Baker in his office at the main branch of the Miami-Dade library. The interview was recorded by Jahmoukie Dayle and can be found at http://bit.ly/2uNHy0Q.