Advertisement
The Newspaper for the Future of Miami
Connect with us:
Front Page » Communities » Project to calm traffic instead aggravates Miami residents 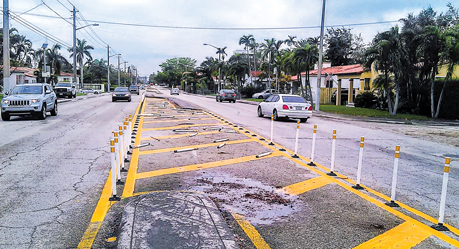 On a motion from Mr. Suarez, the city commission voted to stop the project and remove the bulk of the funds planned for the work in fiscal year 2017-2018. The new budget year began Oct. 1.

Mr. Suarez said the project is on hold awaiting a new traffic study and community outreach to determine what the residents want in the Silver Bluff neighborhood, the area most impacted by the changes.

The reconstruction of 22nd Avenue, between heavily-traveled US 1 and Coral Way (Southwest 22nd Street) had been in the works for some time. In April, commissioners approved the installation of temporary access control devices or traffic delineators; rows of tightly clustered plastic tubes, blocking traffic access and direct crossover traffic from many of the side streets.

The tubes and directional street markings painted on the road surface were to be a precursor to the finished product, which was to include reduced lanes, two big traffic circles and landscaping, all designed to slow cars and discourage cut-through traffic.

As congestion has grown on the main roads, so has cut-through traffic nearby. The often high speed of these in-a-rush motorists endangers children, pets, pedestrians and property.

Soon after the temporary tubes were placed on Southwest 22nd Avenue, complaints arose from residents troubled by increased side street traffic.

Mr. Suarez told fellow commissioners that at least two side streets were “overburdened” by traffic.

Miami Today asked Mr. Suarez if some people were saying the traffic was being funneled past their homes.

“I would say residents of 23rd Terrace and 25th Street would certainly say so with regard to their streets,” he said. “We are going to do a traffic study to determine traffic flow and overall volume counts, to get an objective analysis.”

The tubes so upset at least one resident that he knocked down several that were prohibiting direct cross traffic last week.

The commission’s recent vote put a stop to that allocation.

The project’s scope was to include removal of the 4-foot traffic separator and turn lanes, proposing a new grass median within the center of the road and only milling and resurfacing the existing lanes.

Reconstructing the median islands and restricting vehicles from crossing straight over all lanes of 22nd Avenue from side streets was designed to discourage cut-through cars.

Similar roadway modifications – limiting access with repositioned and raised medians and right-turn-only design – were made to Southwest 27th Avenue by the Florida Department of Transportation.

Before it was halted, the city’s capital improvement budget showed an estimate completion date of Dec. 3, 2018, for the 22nd Avenue project.

With the project on hold and possibly headed for modification, will the city remove the rows of tubes?

“We cannot remove the temporary barriers until we perform the study,” Mr. Suarez told Miami Today.

“We also want to have a follow-up community meeting to see where the entire community stands on the permanent project,” he said.

“I would say we are also looking at this project holistically on how cut-through traffic will be approached throughout the city,” said Mr. Suarez.

The idea, in part, will be to examine cause and effect; what expected outcome will be experienced in one section of the city if traffic is restricted in another area.

To install the tubes or delineators, the city needed an agreement with Miami-Dade County.

The county owns Southwest 22nd Avenue and is solely responsible for operating and maintaining traffic control devices on the divided roadway, says the city resolution approving the temporary measures.

“The county has approved the installation of the delineators along Southwest 22nd Avenue and requires a maintenance covenant as a condition of approval to which the city has agreed to maintain the delineators,” it says.

Back in April, Commissioner Frank Carollo cast the lone “no” vote, voicing concern about restricting access to roadways.

He said he “cringed a little bit” when he saw the resolution on the agenda. He said any move to limit access to streets reminded him of resident opposition that surfaced years ago when the city proposed limiting turns along Southwest 17th Avenue.

At the April meeting, Mr. Suarez told Mr. Carollo he understood his concern, and while he admitted it’s often difficult to get a consensus, most Silver Bluff residents supported these proposed measures.

“They’re pushing for the delineators… and it allows for an immediate solution,” Mr. Suarez said then.

27 Responses to Project to calm traffic instead aggravates Miami residents