Advertisement
The Newspaper for the Future of Miami
Connect with us:
Front Page » Arts & Culture » Developers plan culinary pop-up along Miami River 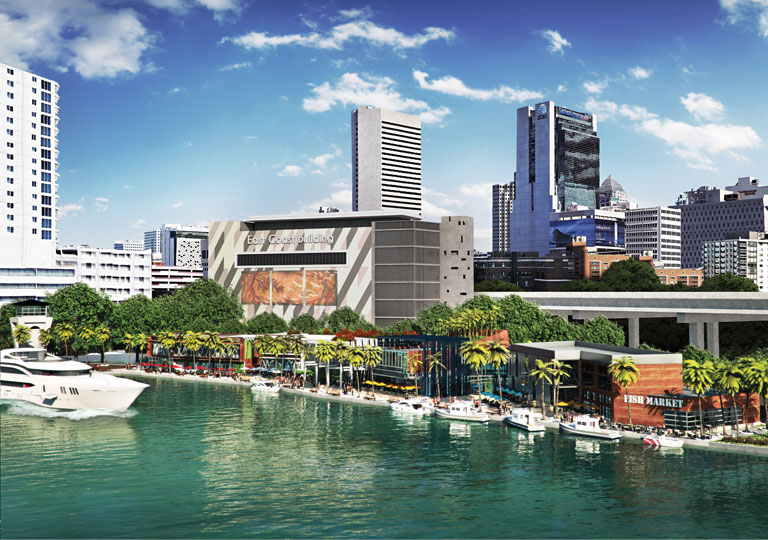 At a bend in the Miami River, just a few blocks from downtown, developers plan to open a culinary pop-up venue next month.

They say it will be a taste of what’s to eventually rise at the site, a mixed-use food and entertainment destination known as Riverside Wharf.

The overall project earned the approval of City of Miami voters in March 2016, a referendum triggered by the city code and charter requiring voter approval of the lease or sale of city property.

The temporary pop-up designed to kick-start activation of the site at 114 SW North River Drive was announced Monday at a meeting of the Miami River Commission by one of the owner-developers, Alex Mantecon.

The temporary use assembly plan goes by the name The Wharf and is being promoted as “South Florida’s newest entertainment venue.”

The Wharf will employ concrete, AstroTurf, tents and canopies, tables and chairs and three to four food trucks to bring life to the vacant land between I-95 and the SW First Street Bridge.

The use is described as: “A temporary entertainment and culinary installation/event featuring local chef inspired food trucks where local residents and visitors may sample unique and limited local fare and music.”

It further says the temporary venue is designed to accommodate up to 1,000 people.

The site plan shows the layout for the food trucks, up to five small retail huts, lounge seating on a wooden deck, waterside seating along the river, pedestal seating and tables, space for two bars, communal tables and ping pong.

A 5-foot-deep landscaped buffer is to be placed along Southwest North River Drive, and the site will have some transient dockage.

The site is to include a restroom trailer. Parking will be at a Miami Parking Authority lot at 200 SW First St.

Mr. Mantecon said the venue will offer live jazz bands. The site plan notes that programming will be in accordance with the city’s noise ordinance.

The plan calls for family-oriented spaces with play areas for children during the daytime.

Mr. Mantecon told the commission that Riverside Wharf LLC has signed its lease with the city and already made significant improvements to the property.

Construction of a new seawall has been completed, he said, along with removal of old underground tanks in environmental remediation.

Mr. Mantecon said the developers have spent close to $1 million on the property thus far. He said The Wharf will open in the first or second week of November.

The riverside venue will debut just a few weeks prior to Art Basel Miami Beach, the international art fair that brings thousands to South Florida.

A news release touting The Wharf refers to being a part of a growing new arts and culinary scene in Miami.

“Patrons will have the opportunity to support a delightful rotation of artists, acclaimed chefs and musicians, helping to further shape the city’s dynamic local arts and cultural scene,” it says.

Mr. Mantecon said the main goal is to build a culinary and art destination in Miami, and this temporary use is like “an introduction to the future” of the site.

In March 2016, voters approved a lease of 0.73-acre on the river to Riverside Wharf LLC, providing for $195,500 of minimum guaranteed annual rent and an investment of about $7 million in private improvements, including construction of restaurants and the continuity of the public riverwalk, for a 30-year term with two 10-year renewal options.

The proposal includes a complex of four riverfront restaurants and event spaces and a fish market and oyster bar run by Garcia’s Seafood, along with a new portion of the riverwalk.

Mr. Mantecon said the developers don’t expect to begin their construction for about one to one-and-a-half years.

The river commission unanimously supported the project in late 2015.