Advertisement
The Newspaper for the Future of Miami
Connect with us:
Front Page » Communities » Zoo Miami reopening date nears decision 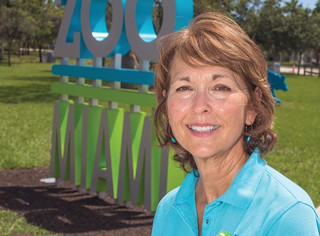 With Zoo Miami’s fiscal year coming to an end Sept. 30, the zoo projects to end the year with about 932,000 visitors, according to Director Carol Kruse, after closing earlier this month due to Hurricane Irma, leaving the zoo 68,000 visitors shy of meeting its 1 million visitor mark.

“We hoped to meet our goal of 1 million visitors this year,” Ms. Kruse said, “but, due to Hurricane Irma, we have been closed and are in the process of recovering as quickly as possible.”

“However,” she said, “we were able to beat last year’s attendance of 903,687 visitors with approximately 919,858 visitors, which was recorded during the month of August.”

Moving forward, Ms. Kruse said, the zoo expects to announce its official opening date next week as crews continue to work throughout the zoo and clear out as much debris as possible.

“We are looking to re-open by mid-October,” Ms. Kruse told Miami Today, “and are looking forward to a strong holiday season with our annual Zoo Boo celebration and Zoo Lights,” which allows families and kids 12 and under to trick-or-treat in costumes, participate in costume contests, watch special performances and more during October and allows guests to walk through the zoo and see animal-shaped light displays, twinkling palms and more during December.

Another way the zoo plans to grow its attendance is through an extension of its summer savings pass, which gives pass holders unlimited admission to the Miami Seaquarium, the Museum of Discovery and Science, Zoo Miami and Lion Country Safari, for another month after its official reopening date.

“Unfortunately due to Hurricane Irma, Miami attraction month, which is hosted by the Greater Miami Convention & Visitors Bureau during the month of October has been cancelled, which really helps boost attendance,” said Cindy Castelblanco, a spokesperson for Zoo Miami. “We also had to reschedule our Mercantil photography contest for next February due to the hurricane.”

However, Ms. Kruse said, “We are excited to re-open as soon as possible, welcome visitors to the zoo and are looking forward to resuming all normal activities very soon.”