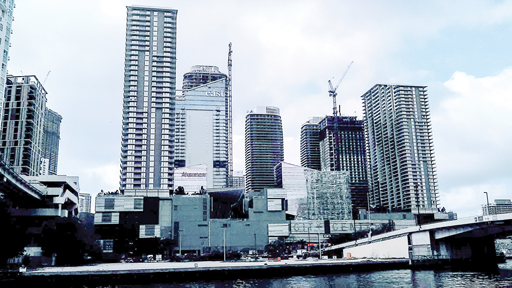 Miami police will have an office in Brickell City Centre now that city commissioners have approved a lease with the management company of the vast development.

The company will provide about 195 ground floor square feet in the Brickell City Centre East loading dock building at 701 S Miami Ave. for “police operations” in a five-year lease at no cost to the city, according to the resolution.

This arrangement will enable the police to provide safety benefits at the company’s expense, including general office and dispatch of the Miami Police Department Brickell Avenue Patrol, the detainment of suspects, and security of surrounding areas with police presence.

The company will also grant a license for four unassigned parking spaces at 700 Brickell Ave., where the project’s future centerpiece tower is to rise.

Brickell City Centre is a $1.05 billion project south of the river along South Miami Avenue, between Eighth and Fifth streets. The overall complex is to have more than 5 million gross square feet, including underground parking and 2.9 million square feet of office, residential, hotel, retail and entertainment space.

Brickell City Centre will also have a fire-rescue presence.

In June 2016, commissioners approved an agreement with Brickell City Centre Project LLC, a Swire subsidiary, promising to build a 6,500-square-foot fire station in the project and lease it to the city at $2 per square foot per year, rising 1.5% yearly in a 50-year lease. That would total $13,000 the first year.

City leaders said construction of City Centre as well as the surrounding development in the area has increased the need for fire-rescue services.

A Swire representative indicated the fire station will be constructed as part of a future phase of Brickell City Centre, on property between Southeast Fifth and Sixth streets close to the Miami River.

City officials point to the agreement as a good example of how a public-private partnership can work to benefit both parties, and Swire says it hopes it is setting an example for other developers to provide public benefits as part of a private project.

As part of the city’s Miami 21 zoning code, the public benefits program allows bonus building capacity in exchange for a developer’s contribution to programs that benefit the public, including affordable housing, parks and recreation, civil and civic support and more.

Swire will construct the fire station at its cost, and the city will pay for for interior finishes and build-out.

A background memo on the fire-rescue station notes that furniture, fixtures and equipment costs estimated at $500,000 would be brought to the commission later.