Advertisement
The Newspaper for the Future of Miami
Connect with us:
Front Page » Government » Private developer has designs on Fort Dallas Park in Miami

Private developer has designs on Fort Dallas Park in Miami 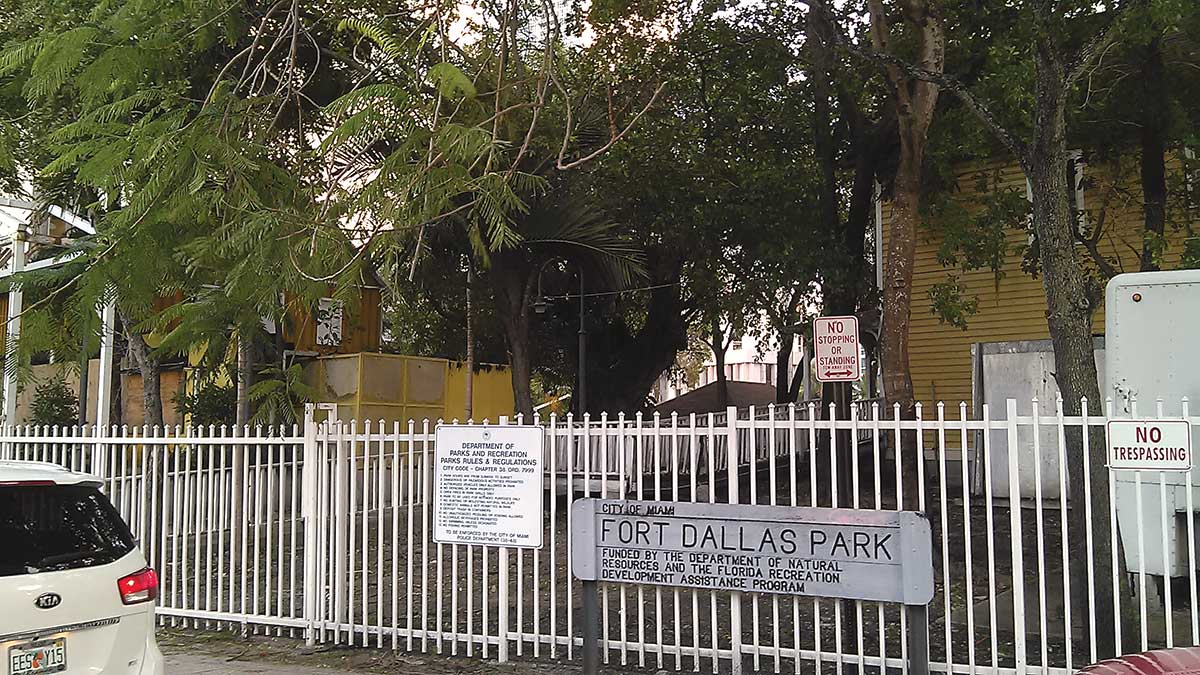 Fort Dallas Park, on the Miami River downtown, could be redeveloped and include a new restaurant and improvements to a historic cottage on the city-owned site.

The plan for improvements at the park is included in an unsolicited proposal to the City of Miami from Sanctus Spiritus LLC, which has proposed a public-private partnership with the city.

The proposal for the city-owned park at 60-64 SE Fourth St. was a discussion item on the city commission agenda this week.

Two buildings occupy the site on the north bank of the river, sandwiched between a hotel and the county’s Riverwalk Metromover station. They include a gutted and dilapidated former restaurant and The Flagler Worker’s House, also known as Palm Cottage, the last known building in Miami directly associated with railroad magnate and developer Henry M. Flagler.

For many years, seafood restaurant Bijan’s operated from the commercial building under a lease with the city. Litigation and allegations of unpaid rent ensued and the eatery eventually shut down. The legal battles have since been settled, yet the park’s fate remains in limbo.

For the most part, the waterfront site has been blocked off and forgotten for several years, attracting trash and the homeless. The situation got so bad that a temporary security fence was installed around the site.

More than a year ago, the city requested letters of interest to reactivate the site with a restaurant. At the time, the city was offering only a short-term revocable license of five years, and the move didn’t secure a new operator/tenant.

Since then, the City of Miami Department of Real Estate and Asset Management received an

unsolicited proposal from Sanctus Spiritus LLC to redevelop the property to include a new restaurant, as well as capital improvements to the Palm Cottage.

Built around 1897, the historic house was one of at least 30 rental houses that Mr. Flagler constructed as homes for workers building his Royal Palm Hotel. The building was moved to Fort Dallas Park in 1980 and listed in the National Register of Historic Places in 1989.

Sanctus Spiritus is proposing to demolish the remnants of Bijan’s, construct a new restaurant, and improve the Palm Cottage in accordance with the City of Miami Historic Preservation Office standards and requirements of the National Register of Historic Places.

Code requires staff to bring unsolicited proposals to the city commission for discussion and action prior to advancing any such proposal.

If the commission likes the idea and approves moving forward, a vote of city residents may be required as well, because it’s city-owned waterfront property.

The Miami River Commission has for many years pushed the city to clean up and improve the park for public use.

The park came up in recent debate over redevelopment of nearby city-owned riverfront that’s home to a Hyatt Regency hotel and the James L. Knight Convention Center. Hyatt has proposed a major redevelopment but wants a new lease and control of the convention center.

Commissioner Ken Russell has suggested a master plan for the entire riverfront, to include the hotel and convention site and Fort Dallas Park.