Advertisement
The Newspaper for the Future of Miami
Connect with us:
Front Page » Top Stories » Miami’s art in public places program a picture of dissent

Miami’s art in public places program a picture of dissent 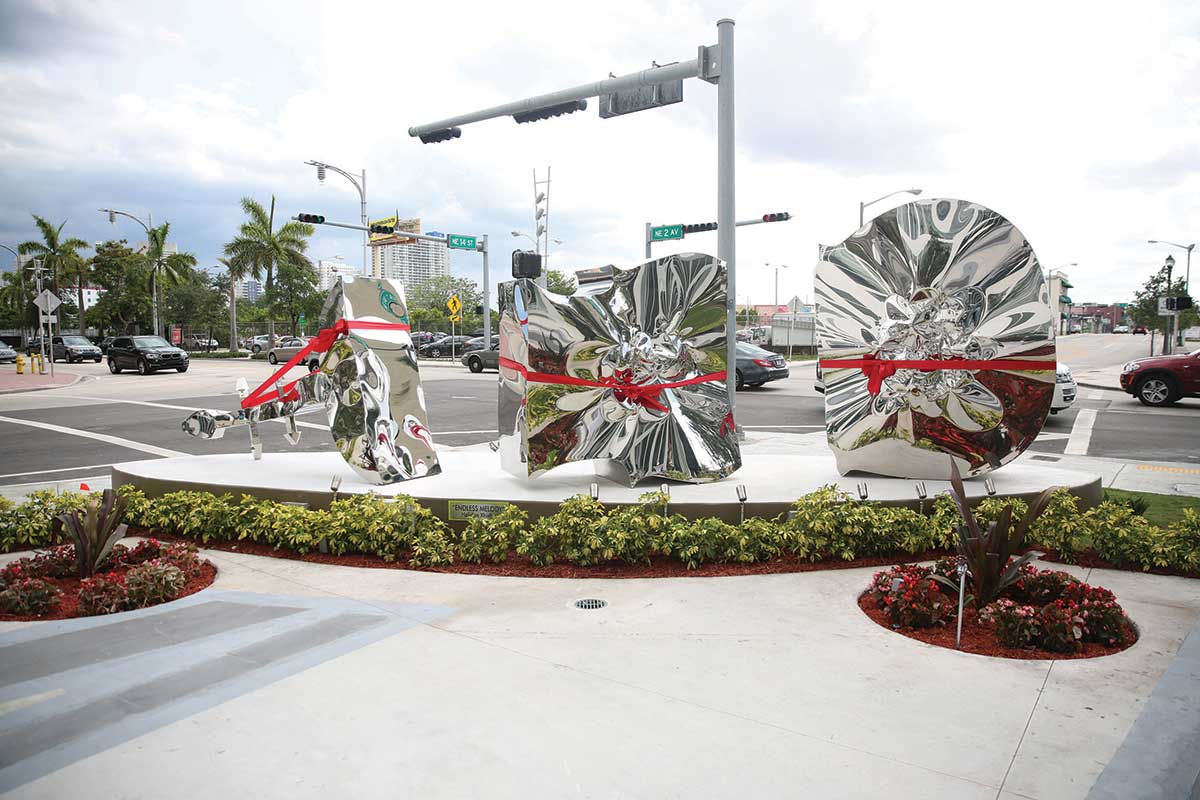 The City of Miami is still getting grief about its proposal to expand its new Art in Public Places Program to include private developments.

Some developers and representatives of building contractors have voiced concern and opposition to the city’s move, forecasting a negative impact from adding unnecessary costs to future projects.

Meanwhile, business leaders in the Wynwood Arts District continue to fight to be excluded from the proposed legislation.

The second part of the city’s Art in Public Places Program, identified as Phase II, isn’t yet on the books. City commissioners approved the legislation on a first reading in June. A final vote has yet to be held.

David Polinsky, member of the Wynwood Business Improvement District (BID) board and chair of its planning and zoning committee, said the item may come up in October and he implored the arts community to appeal to the city commission.

The city’s plan to take over responsibility for its own Art in Public Places Program from Miami-Dade County began more than a year ago.

The move is designed to save administrative fees, avoid financial penalties and have more control over bringing iconic art pieces to public and private developments.

Opposition to proposed rules on private developments stalled that portion of changes for several months to refine the details.

Commissioners granted initial approval to the redrafted legislation governing art in public places on private projects June 22, after hearing from supporters and detractors.

Support was expressed by neighboring municipalities including Coral Gables, Miami Beach and the Village of Palmetto Bay. Dade Heritage Trust and Miami-Dade County Public Schools back the measure as well.

Opposition came from representatives of builders and developers, with the main complaint being added costs.

Truly Burton, executive vice president of the Builders Association of South Florida (BASF), spoke in opposition to the proposed rules on private developers and submitted a letter outlining continued concerns of the group.

“At this time, respectfully, BASF cannot support what amounts to an art impact fee. Instead, the association respectfully suggests this board consider recommending an incentive-based approach, to the city commission,” said Ms. Burton.

The ordinance would impact projects with construction costs above $3 million.

All non-governmental and private sector development projects (including interior or exterior modifications, additions or new construction) including parking structures, residential development projects, mixed-use projects or commercial sites would have to provide for the acquisition of works of art subject to a project valuation schedule, a fee into a public art fund, or a combination of the two, according to Phase II.

νDevelopments costing $3 million to $5 million would provide for the acquisition of art worth at least one-half percent of construction cost for artwork provided on site, or a quarter percent if the fee is paid into the fund.

νDevelopments of $5 million to $10 million would provide for the acquisition of art for at least three quarters of a percent of construction cost on site, or half a percent if paid into the fund.

νDevelopments of $10 million to $15 million would acquire art costing at least 1% of construction cost for display on site or three quarters of a percent if the fee is paid into the fund.

νDevelopments above $15 million cost would acquire art worth at least 1.25% of construction cost or 1% if the fee is paid into the fund, or a combination.

This ordinance wouldn’t apply to interior renovations or remodeling costing less than $3 million.

The legislation would establish a Public Arts Program and board. The city could use money in the new Public Art Fund to buy public art and for cultural and educational programs and historic restoration and preservation.

The proposed legislation reads, in part: “… a public art program would create a stimulating and diverse cultural environment that reflects, defines, and enhances the city’s heritage, values, and visions for the future through art integrated in the architecture, infrastructure, and landscape.”

The legislation cites two court cases regarding a municipality’s authority to have such rules.

In Metromedia Inc. v. San Diego, a 1980 case, the US Supreme Court held that land development regulations that require development to meet aesthetic conditions have been generally found to be supported by a legitimate public purpose.

In Ehrlich v. City of Culver City, a 1996 case, the California Supreme Court held that an art fee on private development is a legitimate aesthetic regulation that does not require the same level of legal scrutiny as an impact fee.