Advertisement
The Newspaper for the Future of Miami
Connect with us:
Front Page » Communities » Miami had tucked away money for storms like Hurricane Irma

Miami had tucked away money for storms like Hurricane Irma 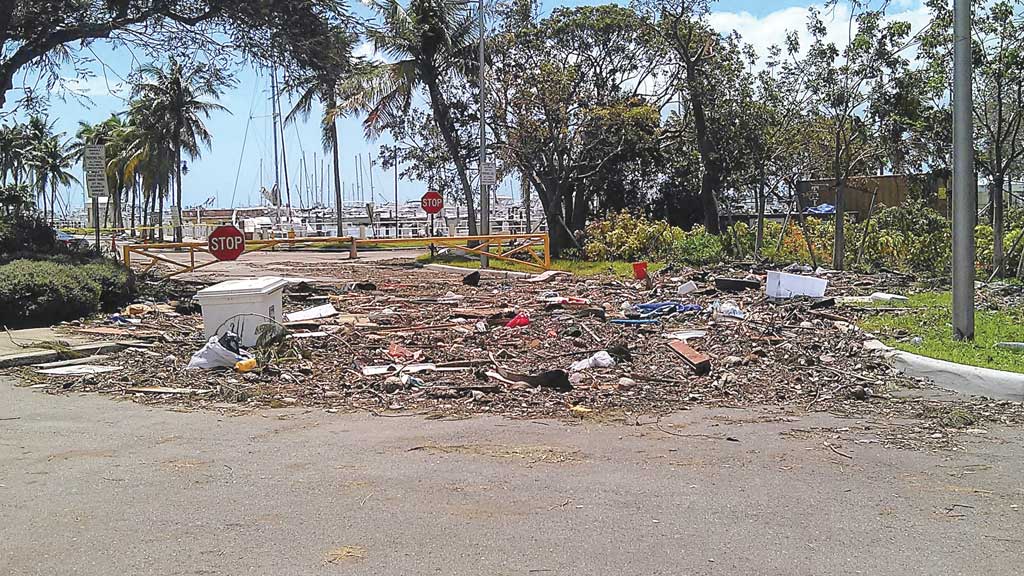 City of Miami government officials prepare for storms like Hurricane Irma by tucking away money for emergency needs, lining up a fleet of private contractors with trucks and chainsaws, and taking proactive action like cleaning out stormwater drains and ditches.

By nearly all accounts, the reaction to the Sept. 10 hurricane has been: It could have been worse.

Along with downed trees and scattered debris in many city parks, the city did sustain some damage to government buildings, including police and fire stations.

Perhaps the most significant hit was to the city’s three marinas, which remain closed due to the storm damage.

City officials are working to calculate the financial hit the municipality will have to bear, while holding onto expectations that the state and federal government will provide assistance, according to Christopher Rose, director of the Office of Management and Budget.

It is still too early to tell what the financial impact will be to the city budget in terms of clean-up efforts, and overtime costs for police, fire-rescue, public works crews and others, he said.

“The city is still assessing and estimating costs of overtime, logistical response, debris clearing, and necessary repairs. The city does not have a comfortable estimate right now,” Mr. Rose told Miami Today on Monday afternoon.

Because this was an “all hands on deck” situation, most departments have some costs that can be attributed to the storm, whether it is overtime, repairs, or purchases that would not have been made if it were not for Hurricane Irma, he said.

The city’s three marinas were damaged and are undergoing assessment and cost estimation, said Mr. Rose. The next largest impact was tree and fence damage in many city parks.

The city does have $5 million of reserve set aside every year for just such situations, known as the Contingency Reserve of the Operating Budget.

The city also has $8.2 million in the current year and $8.8 million next year (not yet approved by the City Commission and subject to amendment) in a reserve known as the “Reserve for Uncollectable Revenues” that could also be used for this purpose, he said.

“But, most importantly, the city will be seeking FEMA (Federal Emergency Management Agency) reimbursement according to the Federal Stafford Act for most storm-related costs,” said Mr. Rose.

City crews and trucks have been clearing away debris from the storm. City contractors have estimated 1 million cubic yards of debris on or along public streets from the storm, he said.

The city had more than 40 private trucks and vehicles working on debris removal the Monday after the storm, ramping up to 80-100 vehicles toward the end of the week, he said.

“This is in addition to the City of Miami Department of Solid Waste and Public Works crews that are also clearing debris from public roads, as well as Parks and Recreation crews clearing debris in parks,” Mr. Rose said.

He noted there is a significant demand for these crews nationwide, especially in the rest of Florida and in Texas.

Through it all, Mr. Rose had praise for city employees.

“The Department of Real Estate Management team worked extraordinarily hard to get the Dockmaster Building back open within two days at the Dinner Key Marina,” he said. “This building is the communication line that patrons of the marina have with their family and acquaintances.”

He added, “Our procurement team did an amazing job getting ice, water and food for city residents – and fuel for city vehicles – and for other municipalities, too.”