Advertisement
The Newspaper for the Future of Miami
Connect with us:
Front Page » Real Estate » Related Group arm may add housing atop Olympia Theater 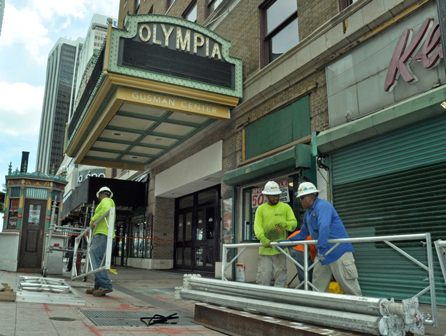 The aging and grandiose Olympia Theater in downtown Miami could get a new lease on life if Miami commissioners buy into a proposal from an arm of mega-developer the Related Group to rehab the theater and redevelop the residential units above.
The venerable venue hasn’t had a major facelift in more than 15 years.
The city commission is to discuss the new proposal today (9/14).
The city owns the property, the Olympia Theater at the Gusman Center for the Performing Arts. The property at 174 E Flagler St. is currently managed by Olympia Center Inc., a Florida not-for-profit.
The city’s Department of Real Estate and Asset Management has received an unsolicited proposal from RUDG (Related Urban Development Group) LLC, to form a public-private partnership to redevelop the site’s 80 residential units and make capital improvements to the theater.
A background memo says RUDG proposes to demolish and replicate the building, in accordance with the City of Miami Historic Preservation Office standards, into a mixed-income affordable and workforce housing development with 200 to 300 units, and to renovate the theater.
The theater was named to the National Register of Historic Places in 1984.
City code requires city staff to “first notify the commission of the unsolicited proposal by placement of a discussion item on the agenda for the commission’s approval to proceed with said unsolicited proposal project.”
The proposal came in a three-page letter May 9 from Alberto Milo Jr., senior vice president and principal of Related Urban Development Group, a Related entity formed in 2009 to develop and acquire affordable and workforce housing.
The letter offers some details and notes that the city has already allocated $3 million for capital improvements to the site.
“The city will lease the land to the owner entity for a capitalized lease payment amount approved by both parties,” Mr. Milo wrote.
It is intended that the owner entity have one member, RUDG LLC will be the managing member and will have 100% ownership, the letter says.
“RUDG will secure the construction loans and will provide the necessary guaranties to finance the project and have sole control of all major decisions and day to day operations,” it says.
TRG Management Co. of Florida, another Related arm, would manage the mixed-income housing development, the proposal reads.
Workforce housing is generally defined as attractive and affordable residences for middle-income service workers such as police officers, teachers and nurses near their jobs.
With city approval, RUDG would select a 501 c3 non-profit to manage the Olympia Theater, according to the proposal.
The Olympia Theater opened in 1926 as a silent movie palace and the city’s first air-conditioned building. In 1975 Maurice Gusman bought the theater and adjacent Olympia office building and donated them to the city.
For many years, the city’s Department of Off-Street Parking managed the property.
The theater has hosted major events such as the Miami Film Festival. The venue hosted then-Sen. Barack Obama in 2007 during his book tour.