Advertisement
The Newspaper for the Future of Miami
Connect with us:
Front Page » Business & Finance » Miami police due to get an office in Brickell City Centre

Miami police due to get an office in Brickell City Centre 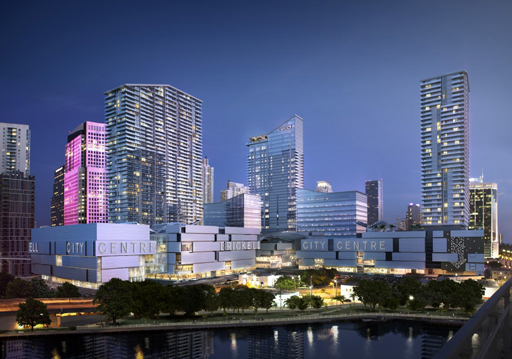 Miami police will have an office in Brickell City Centre if city commissioners approve a lease with the management company of the vast development.
Swire Properties is developing the multi-block project and last year opened phase one, which includes residential towers, offices, hotel rooms and a 500,000-square-foot shopping center.
The proposed lease for a police station is on the commission’s agenda today (9/14). The resolution would authorize the city manager to sign the lease with BCC Facilities Manager LLC.
The company will provide about 195 ground floor square feet in the Brickell City Centre East loading dock building at 701 S Miami Ave. for “police operations” in a five-year lease at no cost to the city, according to the resolution.
This arrangement will enable the police to provide safety benefits at the company’s expense, including general office and dispatch of the Miami Police Department Brickell Avenue Patrol, the detainment of suspects and security of surrounding areas with police presence.
The company will also grant a license for four unassigned parking spaces at 700 Brickell Ave., where the project’s future centerpiece tower is to rise.
Brickell City Centre is a $1.05 billion project south of the river along South Miami Avenue, between Eighth and Fifth streets. The overall complex is to have more than 5 million gross square feet, including underground parking and 2.9 million square feet of office, residential, hotel, retail and entertainment space.
City Centre will also have a fire-rescue presence. In June 2016, commissioners approved an agreement with Brickell City Centre Project LLC, a Swire subsidiary, promising to build a 6,500-square-foot fire station in the project and lease it to the city at $2 per square foot per year, rising 1.5% yearly in a 50-year lease. That would total $13,000 the first year.