Advertisement
The Newspaper for the Future of Miami
Connect with us:
Front Page » Communities » Chinatown design nears review and approval 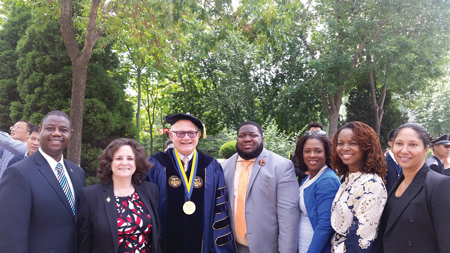 After sending six city officials on a 12-day trip to China last May, the City of North Miami completed its conceptual design master plan for its Chinatown Cultural Arts & Innovation District, which is to be presented to the city’s Community Redevelopment Agency this month for review and approval.
“Right now we are continuing our planning and public feedback process,” said Larry Spring Jr., North Miami city manager. “We have completed the master plan, which comprises aspiring schematic designs for street infrastructure along with an economic analysis of future developments such as commercial space, hotels, businesses and potential retail opportunities.”
Once the redevelopment agency (CRA) approves the master plan, Mr. Spring said, “we can go and attract investors who are interested in working on the project.”
The Chinatown Cultural Arts & Innovation District, which was championed by Vice Mayor Alix Desulme and designated by the North Miami City Council in 2016, is comprised of 16 blocks over commercially zoned land along Northwest Seventh Avenue between 135th and 119th streets.
“The city will facilitate the change of the street infrastructure,” Mr. Spring said, which will be achieved “by implementing a walkable streetscape that’s retail friendly.”
In regards to funding the master plan and overall project, Mr. Spring said, “The CRA paid about $150,000 for the development of the master plan and we were given a minimum of $3 million for street construction.”
However, costs for developing the Chinatown Cultural Arts & Innovation District can vary, he said.
As a result, one way the city plans to gain investors to help fund the project is through its partnership with Florida International University
“Our partnership with Florida International University is very important,” Mr. Spring said. “They have been a willing participant with us and sit at the table with the master plan advisory committee.”
“They are necessary to this project,” he said, “because they have an established relationship in China due to the school’s hospitality and tourism management program in Tianjin and have helped to identify groups interested in investing in the real estate area.”
Outside of the city’s partnership with FIU, Mr. Spring said, there has been a lot of buzz and excitement surrounding the project.
“As of right now,” Mr. Spring told Miami Today, “we are focused on getting what we would like to see accomplished.”

One Response to Chinatown design nears review and approval