Advertisement
The Newspaper for the Future of Miami
Connect with us:
Front Page » Transportation » Miami International Airport to expand a bit for American Express lounge 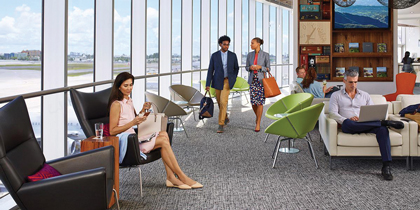 An American Express Travel lounge at Miami International Airport that is at or near capacity nearly half of its operating hours aims to expand by enclosing outdoor space and paying the county another half-million dollars every year for the privilege.

The deal is to come before Miami-Dade County commissioners today (9/7) for approval.

The American Express Centurion Lounge, on the fourth level of the rotunda next to gate D-12, now has 8,541 square feet that it leases from the airport for $1.1 million a year. The aim is to connect an existing outdoor balcony to the building and enclose outdoor space adjacent to the balcony to add 4,000 square feet to the club.

The lounge is so popular now that waiting lists to enter are often needed on Mondays, Thursdays, Friday and Saturdays, frustrating customers who complain of overcrowding, said Deputy Mayor Jack Osterholt in a memo to commissioners supporting the amended lease.

The county commission on May 6, 2014, awarded a 10-year lease with two five-year extensions possible for the club. The site at that time was a vacant club of 6,500 square feet but was expanded to become the 8,541-square-foot Centurion Lounge.

The lease proposal before the county would give the company credit on its lease costs of up to $2 million for the shell and core work in enclosing the space.

Commissioner Rebeca Sosa is sponsoring the legislation seeking approval of the lease.

Access to Centurion lounges is complimentary for holders of the company’s Platinum Club and Centurion cards. In the US, the company has Centurion airport lounges in Seattle, San Francisco, Las Vegas, Dallas, Houston and New York in addition to Miami.