Advertisement
The Newspaper for the Future of Miami
Connect with us:
Front Page » Government » Miami-Dade getting hundreds of touch-screen internet kiosks 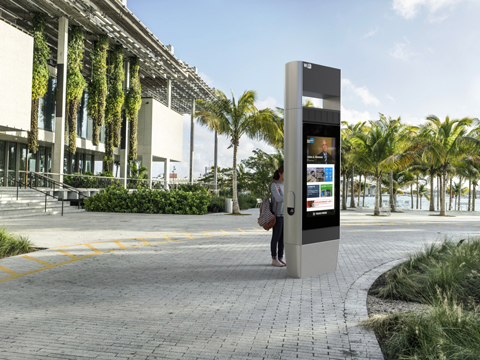 With fewer and fewer residents using public transit, Miami-Dade is pulling out all the stops to add riders.

To improve the ride and blend more technology into transit, the county has partnered with CIVIQ Smartscapes LLC to install up to 300 interactive touch-screen kiosks, at no cost to the county.

CIVIQ has installed 10-foot-tall kiosks in the Stephen P. Clark Government Center lobby downtown and in the second-floor transit station. The company is to unveil to the county the other planned locations by “the end of August,” said Alice Bravo, Miami-Dade’s director of transportation and public works.

The county is to approve the list by Sept. 22 before CIVIQ installs kiosks.

At the kiosks, riders can plot personalized routes, charge phones, access Wi-Fi and take photos of themselves they can send over e-mail.

CIVIQ is to also provide free-high speed Wi-Fi at the kiosks and on county trains and buses to connect the transit schedules, access emergency alerts and give passengers internet access.

“They’re going to put modems on all of our buses, trains and Metromovers to improve our real-time data,” Ms. Bravo said.

CIVIQ is giving the county over 1,000 Wi-Fi devices in transit vehicles and over 50 for transit stations.

“These devices are much more than a new way to access the internet,” Ms. Bravo said. “It will enhance engagement with our services and provide easier access to information.”

CIVIQ is investing about $20 million up front in the kiosks and Wi-Fi, and is responsible for operating and maintenance costs, the transportation department says. Based on cellular fees for 209 buses, all Metrorail and Metromovers, the county will save $2.1 million, the department says.

CIVIQ aims to profit: each kiosk has a digital screen with ads, and CIVIQ can also push ads out to Wi-Fi users.

The kiosks will have the same interactive interface as the transit department’s smart phone app.

“The kiosks will be reading off our platform that has all of our transit information,” Ms. Bravo said. “They’ll have trip planning, real-time data and all of the other features on the app.”

Ms. Bravo said the county doesn’t yet have the number of kiosks that CIVIQ is committing to. “We’re dealing with it in waves. We want to get a few under our belt to see what the issues are.”

All kiosks are to have video surveillance cameras that feed into the county.

“We will receive the surveillance through central observation centers we have in place,” Ms. Bravo said.

While CIVIQ hasn’t confirmed kiosk locations, George Burciaga, company director of global government development and innovation, told Miami Today that the company is looking into other ways to connect the county.

“We are proud of our partnership with Miami-Dade County and our shared commitment to enhancing the Miami-Dade experience for tourists and residents alike,” he said. “We are actively working with the county to deploy a full smart city solution and bring CIVIQ’s WayPoints into neighborhoods and communities throughout Miami-Dade.”

Angel Petisco, county chief information officer, said, “This is one of the single largest tech upgrades, providing real-time benefits to residents of Miami-Dade, I’ve seen in my years here.”