Advertisement
The Newspaper for the Future of Miami
Connect with us:
Front Page » Transportation » As study goes on, Venetian Causeway a replacement target

As study goes on, Venetian Causeway a replacement target 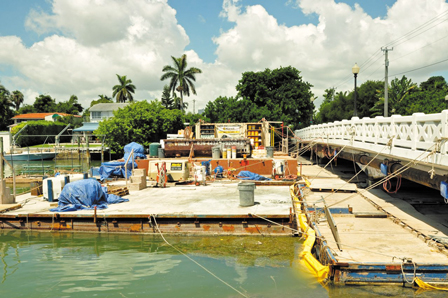 The Florida Department of Transportation’s study of the Venetian Causeway that began last October to address known structural and functional deficiencies of the 12 bridges that make up the causeway is moving ahead to determine whether to rehabilitate, replace or do nothing to those bridges. The county’s stated aim, however, is complete replacement.

The historic causeway, built in 1926, connects a cluster of 11 man-made residential islands with ten fixed bridges and two bascule bridges.

As recently as last year, the causeway’s West Venetian Bascule Bridge was repaired for $12.4 million, adding 60 years of life to the bridge. It reopened on Feb. 29, 2016.

Since then, the state transportation department has been conducting a project development and environment study of the causeway to make future bridge rehabilitation and replacement eligible for federal funds.

“The replacement of the causeway would be the best option at this point,” said Dennis Fernandez, bridge engineering manager for the Miami-Dade County Department of Transportation and Public Works. “Currently, under the study we are required by the feds to analyze each option until early 2019. If it is decided to replace the causeway, a design phase of three years will take place, followed by four years of construction.”

“Throughout the construction phase we plan to maintain all traffic on the causeway,” Mr. Fernandez said. “We don’t want the causeway to shut down as a result of this process.”

The study is currently being funded by Miami-Dade County and the Florida Department of Transportation. The county hopes to receive federal funding for the replacement of the causeway as a result of the study, Mr. Fernandez said.

“Funding for the design phase will come from Miami-Dade County,” he said. “Hopefully, though, the federal government will be participants throughout this process and provide federal funding.”

In anticipation of replacing the causeway, the department of transportation and the county’s public works team plan to have designs for replacing the causeway ready to go by the time a decision is made so they can be ahead of the game and work with the department of transportation and other consultants involved in the project to accelerate the process.

“At the end of the day,” Mr. Fernandez said, “our intent is to replace all the bridges and the causeway.”