Advertisement
The Newspaper for the Future of Miami
Connect with us:
Front Page » Education » New York fashion designer Naeem Khan works with schools on river studio 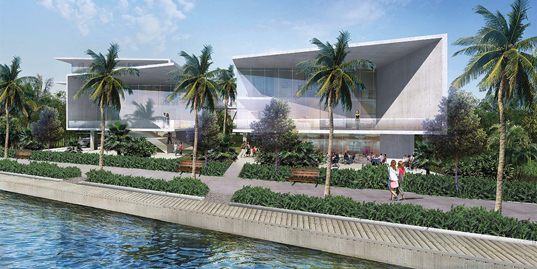 New York fashion designer Naeem Khan, who proposed five months ago to incorporate a vocational school of fashion into his original concept of constructing a design studio on the Miami River, is still on track to open by mid-2019 and is currently in the process of working with the Miami River Commission and Miami-Dade County Public Schools to make sure that the grand opening of the design studio and vocational school go as smoothly as possible.

“We are moving along as planned and are waiting to hear back from Miami-Dade County Public Schools,” Mr. Khan said. “So far, everything is on track.”

The design studio, which is to open in a county-owned site at 1175 NW South River Drive under a long-term lease agreement with Miami-Dade, will front more than 200 feet of the river’s south shore, with dockage planned for the entire length along a 25-foot-wide riverwalk.

As a result, the Miami River Commission recommended in March for Mr. Khan to incorporate revisions to his original plan so that the project can continue to move forward without any issues.

Since then, Mr. Khan said, he and his team have been working on plans to extend the riverwalk under the 12th Avenue Bridge, which will connect with a pedestrian staircase on the west that leads back to the on-road Miami River Greenway.

“There are a lot of numbers floating around in regards to funding for the project,” Mr. Khan said. “As of right now, we don’t have an exact number yet.”

“Once the design studio is open,” he said, “We plan to produce high-end evening wear, couture pieces and bridal wear.”

“This project will make Miami one of the economic centers of the fashion world, as other fashion houses are watching Naeem Khan’s success in Miami,” said former City of Miami commissioner and Naeem Khan’s representative Rosario Kennedy. “This is not just another business opening on the Miami River; it is one that will bring with it membership to a very exclusive club that includes cities like NYC, Paris and Milan.”

“We are very excited,” Mr. Khan said. “It’s a great opportunity for business to flourish in Miami.”