Advertisement
The Newspaper for the Future of Miami
Connect with us:
Front Page » Communities » Miami casts annexation eye on Blue Lagoon, Melrose, Brownsville 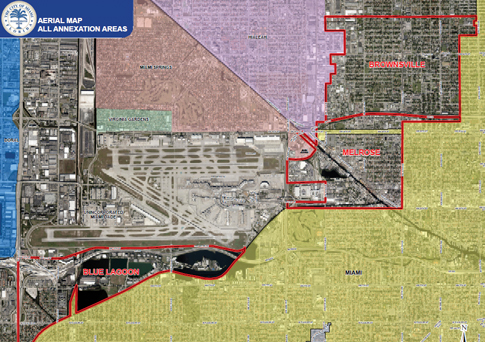 If Miami annexed several unincorporated areas, including Blue Lagoon, Melrose and Brownsville, it would take a financial hit, a study says.

Based on revenue and expense calculations and factoring in the current tax rate, adding the areas as they are today would cost the city nearly $14 million a year.

The possibility of annexing unincorporated areas isn’t new; Miami leaders have debated it for years. For local governments, it’s a way to increase tax base while serving a larger area. The county and voters would have to approve any annexation.

In the last annexation study in 2014, the city asked Florida International University to examine the pros and cons. The city had the FIU Metropolitan Center update the study this year and commissioners recently discussed it.

Without a vote, commissioners directed City Manager Daniel Alfonso to continue to pursue annexation options and to talk to the county about what the next steps would be.

The study includes projected added revenues and costs to expand city boundaries to include the three new areas, and in this case it would be an initial loss.

Commissioner Frank Carollo asked, “So what’s the total net minus?”

Mr. Casamayor said, “Total net minus is about $14 million … to add all three areas, and that’s as they exist today. It does not mean that in the future, based on our zoning code and the additional services that we will be providing in those areas, that it couldn’t spur some development; and actually, these numbers could flip at some point.”

Mr. Carollo responded, “Understood – at some point. My question is, some of the conversations we’ve had with future budgets and so forth, you know, I don’t know if we want to take up additional losses so… I think it needs to be looked at very closely.”