Advertisement
The Newspaper for the Future of Miami
Connect with us:
Front Page » Business & Finance » The appeal of a working riverfront wends way to city hall

The appeal of a working riverfront wends way to city hall 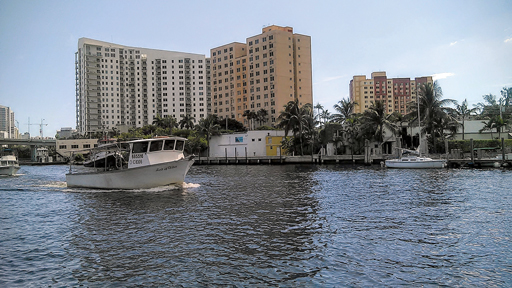 Cory Offutt, owner of Biscayne Towing & Salvage Inc., has for months spoken out against a planned riverside restaurant on land zoned for marine-industrial uses right next door to his business.

He says a restaurant with outdoor dining is incompatible with a loud and smelly shipyard.

“This is a huge impact on my business,” he said at a meeting early this year. “There’s no way we can survive in harmony together.”

The owner-developer of the proposed restaurant, Shahab Karmely, disagrees and has said he loves that the Miami River is a “working river.”

Mr. Karmely and his KAR Properties propose River Arts Complex, to transform three warehouses into a dining and event space at 125, 129 and 131 NW South River Drive. It includes a partnership with Yachtlife, a private club with yacht sales and rentals. The plan sets aside one commercial fishing boat slip to provide fresh seafood catches to the restaurant and public.

The property is zoned D3 for marine-industrial uses, but a restaurant would be allowed with special permission or by administrative warrant.

The warrant process is a special conditional use that is decided by the city’s planning director and is subject to appeal by neighboring property owners. The granting of a warrant can be appealed first to the city’s Planning, Zoning and Appeals Board, and that decision can be appealed to the city commission.

That’s the path this project has taken.

On April 7, Planning Director Francisco Garcia approved a warrant for the project, with several conditions.

The Planning, Zoning and Appeals Board first heard the appeal May 17, and the board backed Mr. Garcia and denied the appeal in a 9-2 vote.

The appeal is now before the Miami City Commission. On July 27 the case was deferred until the commission’s Sept. 28 meeting.

In a four-page decision on the warrant, prepared by the planning staff and signed by Mr. Garcia, one finding is that the application is to permit a private yacht club and lounge with yacht sales/rentals at the property with an accessory food service establishment with outdoor dining areas within a D3 Transect Zone.

“The accessory, onsite restaurant maintains a water dependent use by emphasizing local seafood, furthermore providing a dock space for commercial fishing vessels to unload and sell their seafood,” the decision reads.

The warrant was granted, but along with more than a dozen conditions, including:

Off-site parking is required for a proposed valet service.

The planning director must validate sufficient off-site parking before a building permit is issued.

The Class I and Marine Operating Permits must be approved before a building permit is issued.

Brick pavers can’t cover critical root zones of trees and a state-licensed arborist must prepare a tree protection plan before construction to show how the pavers can be installed without damaging those root systems.

A landscape plan in accordance with the Miami 21 zoning code is required before construction.

Signage must be reviewed under a separate permit application and isn’t part of the warrant.

Musical devices or instruments can’t be used from 11 p.m. to 7 a.m. unless said the music is in a closed building and can’t be heard outside to disturb others nearby.

Noise complaints must be resolved immediately.

The warrant can be revoked for failure to comply with the conditions.

Mr. Offutt has said his Biscayne Towing & Salvage is loud, smelly and operates around the clock. He said a restaurant next door is incompatible with his shipyard and he’s worried he’ll be regulated out of business.

Tucker Gibbs, attorney for the shipyard, argues in the appeal that the proposed food service establishment use isn’t an accessory use to the proposed yacht club and lounge with yacht sales and rentals.

Mr. Gibbs wrote that the appeal board’s denial of the appeal is contrary to provisions of the Port of Miami River portion of the City of Miami Comprehensive Plan, including:

The plan requires the city to encourage and maintain working waterfront uses within the Port of Miami River Working Waterfront.

The plan requires the city to discourage encroachment into the working river by incompatible uses.

At previous meetings before the Miami River Commission and its subcommittees, Mr. Karmely spoke of his affection for the river.

“We are very committed to the river,” he said, mentioning that his company is behind one of the largest projects on the river. One River Point is planned as dual 60-story residential towers connected at the top with a private club and at the bottom with a giant waterfall, along with a series of high-end lodging units on the top floors.

Mr. Karmely said the river is the heart of the city.

He said the key to development along the river is how to “weave the fabric of the river” into other uses – uses that open the river to different constituencies.

The river can be a place for multiple uses, he said, including restaurants and lounges.

At a special river commission meeting early this year, a motion to recommend a warrant for the River Arts Complex failed on a vote of 6 “no” to 5 “yes.”

At the same meeting, the river commission recommended denial of a similar proposal for a marine-industrial site further up river.