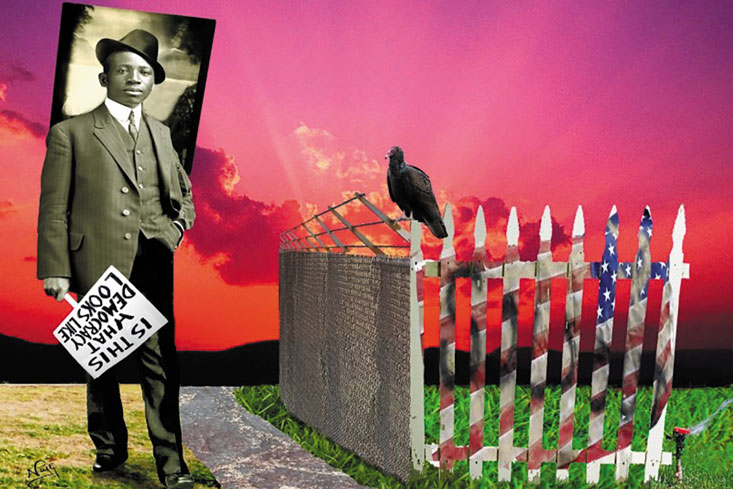 In their efforts to solidify Overtown’s position as a hub for history and the arts, directors of the Southeast Overtown/Park West Community Redevelopment Agency (CRA) voted unanimously to grant The Urban Collective $175,000 for this year’s Art Africa Miami Arts Fair during Art Basel. Frank Carollo and Ken Russell, both city commissioners and CRA directors, were absent from Monday’s meeting.
“Art Basel is one of the largest annual cultural exhibitions of contemporary art,” said a memo by Clarence E. Woods III, CRA executive director, to agency directors. “Leading art galleries from North America, Latin America, Europe, Asia, and Africa showcase art work from renowned modern and contemporary artist, as well as emerging artists.”
This is the seventh year The Urban Collective has hosted the exhibition, which “will feature fine artwork of contemporary artists from the Global African Diaspora,” said a letter from Neil Hall, the collective’s president and CEO, to Mr. Woods.
The exhibition will begin Dec. 4 with a VIP opening night reception, will open to the public Dec. 5 and will continue though Dec. 10, his letter said.
“We want to pay homage to the centrality of Africa’s artistic contribution to the modern world and to brand art from the Miami black art community as a significant attraction during Art Basel Miami,” Mr. Hall’s letter continued. The Urban Collective, he wrote, will house a number of galleries to create “a centralized space to house the art of this region during Art Basel.”
For the second year, the fair will occupy the first and second floors of the historic Clyde Killens Pool Hall at 920 NW Second Ave., the letter said.
“We are expanding the 2017 showcase from four to seven days to accommodate interest and outreach from not only North America, but also the Caribbean, Africa, South America and Europe,” Mr. Hall’s letter said. The group also plans to program the green space directly north of the Clyde Killens building. “This space will accommodate a series of outdoor large-scale totems and pop-up containers, with a curated selection of art-related vendors,” the letter said.
“It is our belief that historic Overtown, as the bygone epicenter of black arts and culture, must continue to be the destination for this yearly celebration of the very best cultural capital emanating from the African Diaspora,” the letter continued, describing the fair as “a first-class event bridging historic Overtown’s swinging past with its elegant future.
“By advancing both local and global African, African-American and Afro-Caribbean artists, Art Africa Miami has created a wider audience and broadened the scope of opportunities available to the artists, galleries and local small businesses that participate,” Mr. Hall’s letter said.
“We seek each year to transform, educate and enlighten the international community to the depth and breadth of art emanating from our local black community, providing artists from the Diaspora a chance to leave their distinct mark on Art Basel and the international art clientele which it attracts.”
“The Art Africa Music Arts Fair attracts visitors from around the globe to view a multidisciplinary exhibition of fine contemporary art,” said a letter last year from Keon Hardemon, Miami commissioner and CRA chair, to Mr. Hall and The Urban Collective, which he said “has helped to provide an amazing platform for artists throughout the African Diaspora during the Art Basel season.
“Events like this remind participants of the rich history of blacks in Miami,” his letter continued. “I trust you will create an unforgettable experience.”