Advertisement
The Newspaper for the Future of Miami
Connect with us:
Front Page » Top Stories » 200-room hotel for narrow Miami River slice 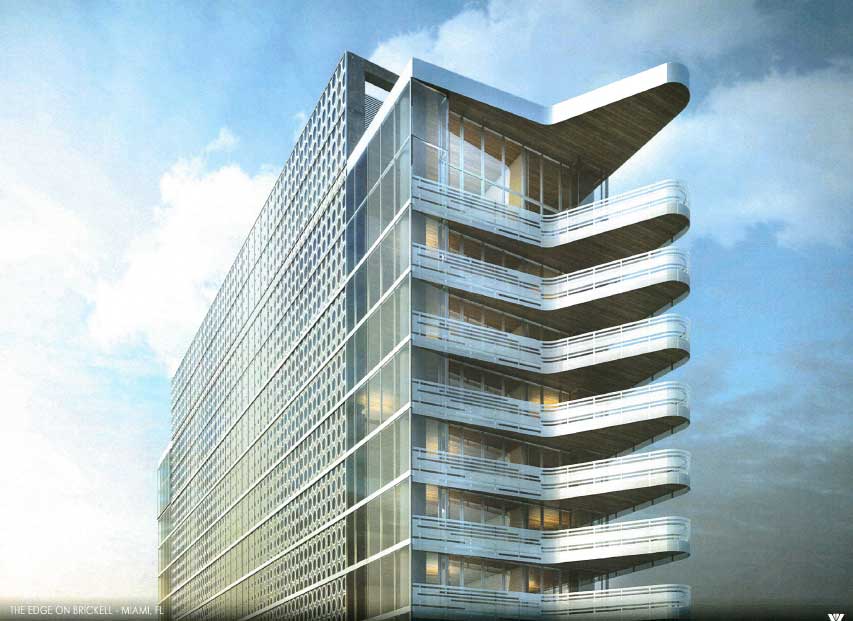 The plan to build a 200-room hotel on a narrow site on the Miami River is a step closer to reality after it earned a supportive vote from the city’s Urban Development Review Board.
The project, called The Edge on Brickell, is planned for 55 SW Miami Avenue Road, right next to the South Miami Avenue Bridge on the site of the former Big Fish restaurant.
The property has changed hands since a condo tower was approved for the site in 2014.
New owner-developer Leo Macedo of The Brick Group plans to build about 200 hotel rooms in a tower that is to include a rooftop restaurant and 70 residential units.
The developer’s team presented the latest site plan and drawings of the mixed-use project to the review board July 19. The board recommended approval, with a condition that the developer consider integrating organic Miami motif into the perforated screening on the lower levels on the side facing the river.
The site is about 14,714 square feet, just over a third of an acre.
The revised plan calls for a slender tower of 58 stories (631 feet, 4 inches), with uniquely designed balconies on the eastern side. The project includes a podium for parking about 122 vehicles, with full valet service.
The 2014 condo plan had a tower of 55 stories and parking for 156 vehicles.
Attorney Ben Fernandez, representing the developer, said the company decided it makes more sense to build a hotel there and to modernize the look of the façade.
The narrow rectangular site comes at a point in the river where the waterway makes a bend, said Mr. Fernandez, and the new design “creates an edge to emphasize the turn in the river.”
The changes in the design add more than 8,000 square feet to the floor area and extend the structure’s length from 198 feet to about 213. Much of the added length is due to the bend-out balconies, he said.
In a letter about the current proposal, Mr. Fernandez wrote: “The project has been revised to address current market demands and to reflect considerable design improvements that will contribute positively to the architectural experience along this important segment of the Miami River. The elevations now present a more modern aesthetic. Highly stylized perforated metal balcony panels run along the east end of the building and highlight the building’s edge, while also contributing to its name.”
Mr. Fernandez said the materials used to wrap the podium include fiber-reinforced concrete, cement panels and clear ionized aluminum mesh in a circular pattern. This pattern is also continued throughout the south elevation.
Project architect Kobi Karp called the property unique for its small size and location.
The design of the tower relates to the river with nautical imagery, he said. “The river is a very important element,” said Mr. Karp.
Mr. Karp said the Miami River Commission liked the project’s direction. The Edge on Brickell would include a public riverwalk along the river’s edge comprised of an 8-foot-wide minimum width pedestrian trail.
The site plan shows dockage on the river as well, extending out about 14 feet from the property line.
The river commission lobbied hard for a wider riverwalk, while acknowledging the small parcel posed challenges.
Attorney Ed Martos, representing condo owners in a nearby development, objected to the review board hearing the project, alleging the revised plan doesn’t comply with the city’s zoning code.
“It’s here. We’re going to hear it,” said Acting Board Chairman Dean Lewis.
Board members asked staff about the project’s status.
“To us, it’s a compliant project,” responded Joseph Eisenberg, a city planner who works with the design review board.
Mr. Lewis said the new design is a significant improvement from the 2014 proposal.
Board member Fidel Perez said he didn’t see big changes from what was approved for the small site years ago.
Mr. Perez did ask if a traffic study was done.
Mr. Fernandez said yes, the developer hired a traffic consultant who has submitted a report to the city.
“This building is an improvement,” said Mr. Perez of the new design. “The mixed use will benefit the building and the area.”
Mr. Perez concluded that the addition of the balconies shouldn’t be a reason to reject the project.
Board member Neil Hall said, “This design is a wonderful improvement. And the hotel component is a plus, especially considering the development going on near Fifth [Street] in Brickell.”
The site is about one block from the sprawling Brickell City Centre.
“This one will be a wonderful addition to the Miami skyline,” said board member Gerald Marston of The Edge on Brickell.