Advertisement
The Newspaper for the Future of Miami
Connect with us:
Front Page » Transportation » Hyatt lease tied to Brickell tunnel staging area 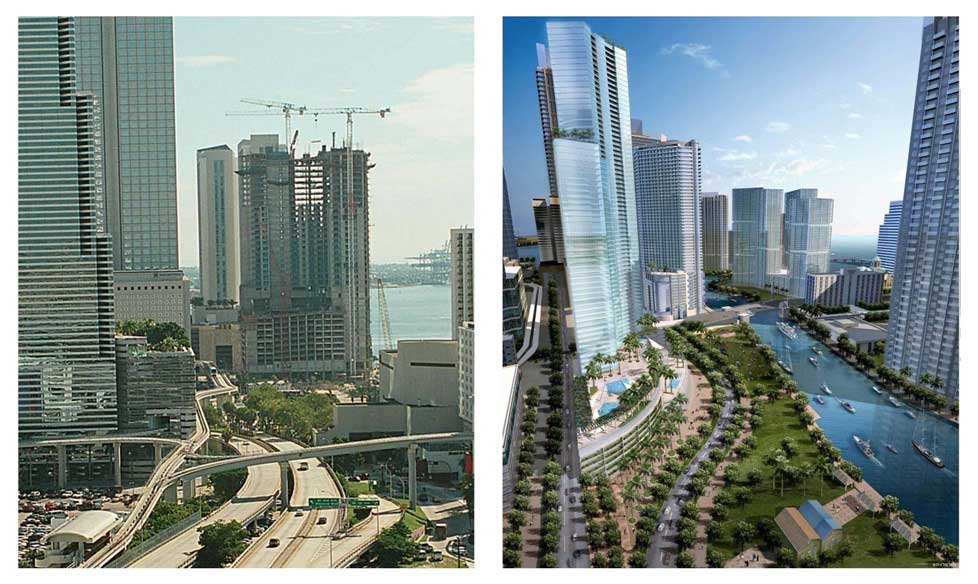 If the Hyatt hotel and adjacent Knight Convention Center downtown are razed for redevelopment, part of the high-profile riverfront site could become a staging area to dig a Brickell tunnel under the river.
That’s just one of many possibilities considered now that city officials and Hyatt reps are renegotiating a lease extension of the city-owned site, with the hotel giant wishing to run the convention center.
Staging for a tunnel has been mentioned a few times in the past three months as city officials worked toward getting a Hyatt lease extension on November’s election ballot. City voters must approve any sale or lease of city-owned waterfront.
Staging was most recently discussed during the July 13 city commission meeting at which Ken Russell moved to withdraw the Hyatt lease from consideration and the vote was unanimous.
Mr. Russell is pushing for a new master plan of the riverfront and inclusion of a large open green space or park.
To get Hyatt onboard with that will take further negotiation, said City Manager Daniel Alfonso, and there isn’t time to resolve the matter to make the Nov. 7 ballot.
Commissioner Francis Suarez likes Mr. Russell’s suggestion and seconded his motion to withdraw – a move requested by the city manager.
With the property so near the Brickell Avenue Bridge, building staging rights into a lease makes sense, some commissioners have said. The Hyatt abuts the southbound lane of Brickell Avenue.
Downtown and Brickell traffic comes to a standstill several times a day when the bridge opens to let river vessels pass.
The idea of boring a tunnel under the river to keep Brickell traffic flowing to and from downtown has gained momentum. Earlier this year, the Miami Downtown Development Authority and the Miami River Commission supported the concept.
Mr. Suarez has strongly advocated for a tunnel and was the first to suggest the Hyatt site be considered for a temporary staging area.
At a meeting May 25, Mr. Suarez said: “On the negotiations for the Hyatt, can I just have a point of order on that? Something to think about: If we end up demoing the Hyatt, or if they end up demoing the Hyatt, keep the right to be able to keep it as a staging ground for the Brickell tunnel – staging for the construction … because that could be significant in terms of eliminating the chaos that would be created by trying to build a tunnel in that area, having a huge staging site there; just build that in.”
He revisited the idea July 13.
“Unfortunately, this one is just not ready,” Mr. Suarez said of the Hyatt lease. “I don’t think there’s been sufficient discussion on staging for the tunnel.”
Mr. Russell also spoke of staging on July 13.
“This could also be an incredible staging area for other projects in the vicinity. If we start getting forward movement on the tunnel, you’ve got this entire area along the river which can stage construction for not only that hotel but the tunnel and bridge improvements and whatever,” he said.
In advocating for a riverfront park, Mr. Russell showed images from a previous master plan about 10 years old by architect Bernard Zyscovich, showing a lush, green riverfront park.