Advertisement
The Newspaper for the Future of Miami
Connect with us:
Front Page » Government » Miami-Dade Charter Review begins year-long effort 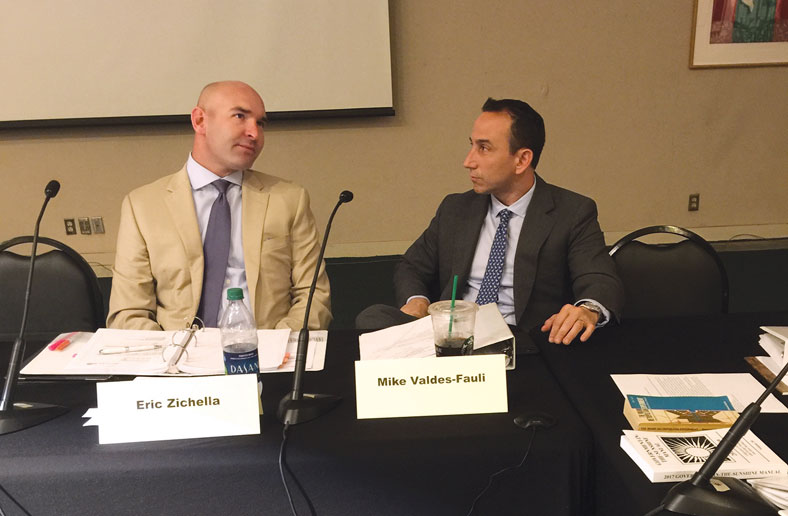 Nine of the 14 Miami-Dade County Charter Review Task Force members made it to the initial meeting last week, putting off selecting a chairperson and setting their schedule until gathering in the evening July 17 at what they agreed is a better time.
Mid-morning and mid-afternoon meetings are not convenient as most of the task force members work, said member Neisen Kasdin. He was joined at the first meeting by William H. Kerdyk Jr., Maurice Ferré, Alfredo J. Gonzalez, Marlon Hill, Maria Lievano Cruz, Eric Zichella, Mike Valdes-Fauli and Carlos Diaz-Padron.
Alice Burch, George M. Burgess, Jeff P.H. Cazeau, Robert Cuevas and Luis E. Gonzalez were not able to attend the 10 a.m. meeting June 28 in the Miami-Dade County Main Library auditorium. Mr. Gonzalez said some members weren’t present because they had prior commitments.
The group has been tasked with proposing changes to the rule book under which Miami-Dade’s government operates, which is to review the Home Rule Charter, the county’s version of a constitution; prepare and submit to the county commission proposed changes in the charter for voters to act upon; invite knowledgeable members of the community to appear and make recommendations; invite representatives of the county’s municipalities to appear and make recommendations; conduct hearings at various stages in the review process; conduct regional public hearings to convey the task force’s recommendations; and receive additional comments from the public about recommendations. A review is supposed to occur every five years.
The nine members agreed last week to select a chairman at the July 17 meeting, which is set for 6 p.m. in the county commission chambers; discuss a meeting schedule and structure; that every meeting will include a public comment period; and the administration will provide information on social media for public participation.
Additionally, the members will tell Nicole A. Tallman, director of policy and legislative affairs for the administration, the areas of study they’d like to hear from experts about. Ms. Tallman served as chair for the first meeting.
The task force discussed the best way to proceed so that members and citizens will be able to attend the meetings. Mr. Ferré recommended all meetings be at places with the facility to televise and that the task force have a structure with committees. He was a member of the 2012 task force along with Don Slesnick, who he said complained there was poor attendance and lack of time to complete the tasks thoroughly.
“Carlos (Diaz-Padron) and I served (for the 2007 task force) and what Don said was all true,” Mr. Ferré said.
Mr. Zichella asked if the task force has resources to advertise meetings and requested it have a new updated website. “If people can’t come to meetings, we should provide a way for them to submit comments online,” he said. “We should discuss how we conduct our business as much as possible when we meet.”
Mr. Zichella said he’s also concerned there could be too much information at the end of the task force (scheduled to sunset March 28, 2018), which diminishes the confidence of the public that they can participate. “We can discuss whether we can send items to (county commissioners) more quickly at the end; we can vote on things as we discuss them.”
The task force needs to understand its ability to bring outside expertise to guide members, Mr. Kasdin said. “There’s a lot to learn about best ideas and best practices,” he said, adding that having meetings in the early afternoon would enhance public participation as well as task force members’ participation.
Mr. Hill said it’s important for the task force to have a website, Facebook page and Twitter feed. “Technology can help us open up conversation that we didn’t have before.” It’s important for the public to have certainty about why the task force is doing this, he said. “We need to build a communications plan. There’s no day or time that will be good for everybody.”
The county has a charter review website that was launched June 27, Ms. Tallman said, and it will be “populated with more information as we go along.” The public can now email the task force.
Mr. Valdes-Fauli said his expertise is marketing and he can help with the website. “I suggest one of the committees be marketing to the public,” he said. “I’d be happy to help.”
Mr. Gonzalez recommended having regional meetings where the task force takes action. “Public hearings need to be spread out throughout the county so the public has a chance to voice concerns.”
Ms. Lievano Cruz advised not selecting a chair at the initial meeting because a lot of people were missing and she wants to hear from more task force members as to why they want to be chair.
Members of the public commented, including Juan Cuba, chair of the Miami-Dade Democratic Party. He thanked the group for taking on the job but said he wants to be sure engagement with the public is increased.
The county commission intended to have a diverse task force, Mr. Cuba said. “There are only two women but no black women,” he said. “I hope (Commissioner Javier) Souto looks into diversity and makes an appropriate appointment.” Mr. Souto is the only commissioner who has not yet announced his appointee.
“The League is interested in your discussion,” said Susan Windmiller, president of the League of Women Voters of Miami-Dade. “I encourage the task force to do a better job of filling meetings with voters,” she said, and she advised the group look to her organization and other members of the community for help with a website.