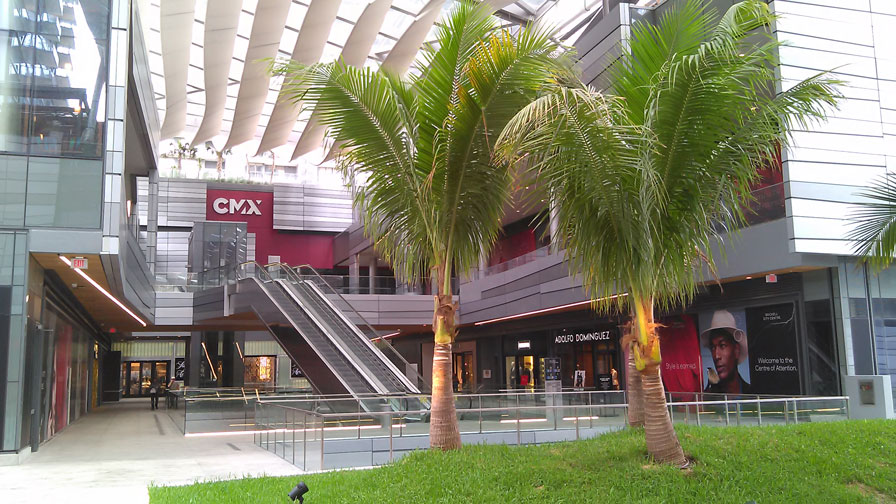 When it comes to the retail sector, much of the buzz surrounds Brickell City Centre and its retail component, which opened late last year.
“Drop a pin on Brickell City Centre and you can see the ripples going out, all around the Miami River,” said Robert Granda, a director of Franklin Street of Fort Lauderdale.
He points to the Nexus Riverside Central mixed-use development, planned for the 2-acre site of the City of Miami’s office building at 444 SW Second Ave., for which a deal has yet to be made with the city. The $465 million project would add 1,500 new housing units and 30,000 square feet of retail, he said. “It used to be that Miami Beach was where you wanted to be, but now Brickell, downtown, Wynwood and the Design District are the epicenter,” Mr. Granda said.
“What’s happening is a testament to Swire’s vision,” he said. “The market was calling for change in Brickell and downtown, and Swire decided to do it” and began construction in the middle of a recession, he said. “The rest of the city has caught up, and now, All Aboard Florida is going to be right in the heart of it. If developers wait for the cities, they’ll wait forever.”
Coconut Grove, he said, is due for a revival, with the delivery of several new condominium buildings and the planned partial demolition, and subsequent rebuilding, of CocoWalk. It will provide the kind of walkable, experience-driven venue that consumers want, especially millennials, he said. “The infrastructure and the transportation are there, and those are the economic drivers in those markets.
“Mixed use is the future, and it has everything to do with the next generation and the change in consumer behavior,” he said. “They want a localized concept; food halls are a thing. They want to support local chefs. Little concepts are going to thrive, and it will be the experience at the venue – and how that plays on social media – that drives the change,” he said.
“We haven’t even seen yet what Miami is capable of,” Mr. Granda said. “In 10 years it will look totally different. People will see us as they see Manhattan and Los Angeles.”
“My office is in Coconut Grove, and we’re in the midst of a repositioning,” said Jason Shapiro, managing director of the Aztec Group. “We’re about halfway there,” with the openings of Harry’s Pizzeria and Glass & Vine, a new restaurant on McFarlane Road, as well as new retail along Main Highway. There’s talk that part of CocoWalk will be office space, furthering the live/work/play model, he said.
“Brickell City Centre is the linchpin,” he said. “You’re going to see development going west to Little Havana. People will come to Brickell City Centre to check it out, and they’ll start looking around.
“Gentrification first comes with bars and restaurants,” of which the Swire project has many. “People come into an area for the attractions, and they want to linger. They want to do their shopping there, and they notice the real estate,” Mr. Shapiro said. “Rents will rise, causing expansion further west, and there will even be new residential once you have people showing interest.”
Development is also pushing northward, into Little River, El Portal and the Upper East Side. He points to The Citadel, at 8300 NE Second Ave., a multi-purpose space featuring a food hall with a handful of restaurants, pop-up vendors and co-working space for creative types. “Northeast Second Avenue is a good path for new retail, with a good demographic,” he said.
There’s also interest in development along transit lines. CocoWalk and Sunset Place are now under the same ownership, Mr. Shapiro said. “Sunset Place has announced some changes in the tenant mix. As you go further south along US 1 to Southwest 144th Street, the unanchored shopping centers on the east side of the street are going through a transition. Rents are increasing quite a bit,” some to $60 per square foot, triple net, he said. “You have a great demographic on the east,” in addition to the Metrorail line. “You can live east and get on the train to go to work.”
“The best retailers are focusing on their omni-channel presence,” said Eric Rapkin, a partner in the Akerman law firm who specializes in commercial real estate, via email. “It’s not bricks versus clicks, it’s bricks and clicks. From both a landlord perspective and a tenant perspective, the types of retailers that will bring shoppers to a project are what will drive development and leasing decisions,” he said. “So, for example, we’re seeing restaurant and entertainment-type retail being in demand, the buzzword these days being ‘experiential.’ ”