Advertisement
The Newspaper for the Future of Miami
Connect with us:
Front Page » Top Stories » Parking authority itching to get into no-parking Beckham soccer stadium

Parking authority itching to get into no-parking Beckham soccer stadium 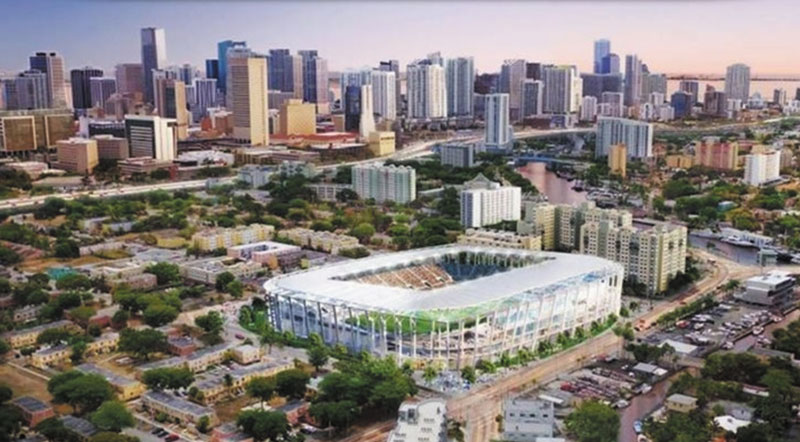 A planned 25,000-seat soccer stadium in Miami with no on-site parking remains a hot topic for those in charge of the city’s vast parking inventory.
While the Miami Parking Authority – under the control of the Off-Street Parking Board – plans no formal role in the stadium project, the agency stands ready to assist if asked, said Authority CEO Art Noriega.
When board members asked for his thoughts on the stadium proposal, Mr. Noriega made several points.
The development group is on record that it will be limiting the number of events at the stadium, and there is no way it will be paying to build a parking garage for the facility, he said.
The group intends to utilize existing parking lots and garages in the city, and expects to spend substantially to improve streets and sidewalks in, around and leading to the stadium, Mr. Noriega said.
David Beckham’s group, Miami Beckham United, recently garnered a vital supportive vote from Miami-Dade commissioners, approving the sale of county land for the privately-funded facility.
The move advances the Beckham group’s plan to construct the Major League Soccer stadium at 650 NW Eighth St. in Overtown.
One day after that county vote, the parking board discussed the stadium.
Board member Marlon Hill said he’s been intently following the progress, in light of the plan for no on-site parking, and he asked Mr. Noriega if the authority should “get ahead of it” or monitor the project.
“It is entirely a soccer enterprise decision,” Mr. Noriega said.
The group will dramatically improve the streets and sidewalks, “invest in infrastructure … and create park and walk opportunities,” he said.
Mr. Noriega said he’s had a lot of conversation with David Beckham’s group about the planned stadium.
For soccer fans, “it’s a very walkable sport,” he said. Since announcing the Overtown site and its plan for no on-site parking, the group has promoted the tradition of walking to the game.
“It’s done in Europe and South America,” Mr. Noriega told the parking board.
Mr. Noriega said “the reality of economics” is also a factor. He said the group says it will limit the stadium to 30 to 40 events a year.
The Beckham group intends to “activate existing inventory,” he said, with one of the most likely locations being the county-owned garage at 701 NW First Court known as Overtown Transit Village.
It’s empty and vacant at night, Mr. Noriega told the board, and it’s closed weekends.
That facility is about five blocks due east of the stadium site and has about 886 spaces. In one of its presentations on the planned stadium, the developer said it’s about a 10-minute walk.
To the north of the stadium site is the Culmer Metrorail Station, about a 4½-minute walk, the developer says.
The developer’s presentation also identifies two other nearby transit stations and other parking facilities.
After buying the bulk of the Overtown site, Miami Beckham United said it was taking a responsible approach to planning by engaging the community, emphasizing the location’s access to public transit and prioritizing walkability.
The stadium site is within walking distance of downtown Miami, the group said, and just two blocks from the Miami River. Water taxis have been touted as one way to get to and from the stadium.
“The Culmer Metrorail Station is three blocks away, 7,000 parking spaces are within a 10-minute walk, and All Aboard Florida’s new rail terminal is within a half-mile, ensuring fans will have several options for arriving and departing on game day,” the group said.
In a presentation to the community, the group put forth what it calls a comprehensive traffic management plan that includes: Maximize existing parking supply; minimize day-of-game traffic impact by accessing the existing parking infrastructure in and around the site; encourage fans to ride public transportation through ticket bundles and financial incentives to ride public transit, car pool and walk to the stadium.
The group has also said it’s willing to secure parking for at least 2,000 vehicles for stadium event days in garages or other public parking lots in the Civic Center or downtown Miami and a shuttle from the garages.
Speaking of the off-site parking opportunities and encouraging public transit use by soccer fans, Mr. Noriega said the key will be promotion on the part of Miami Beckham United.
He said he has extended an open-ended offer to the Beckham group for the authority to be a resource as it moves forward with building the stadium.
It wasn’t the first parking board discussion of the stadium. In March 2016, board member Stephen Nostrand suggested staff get involved in stadium talks and said if the Beckham group builds a major sports venue with zero parking it would be a “disaster.”
Ultimately, a decision on a stadium with no parking is up to city planning and zoning officials and perhaps city commissioners. The Beckham group expects to begin talks with city officials in about six months.