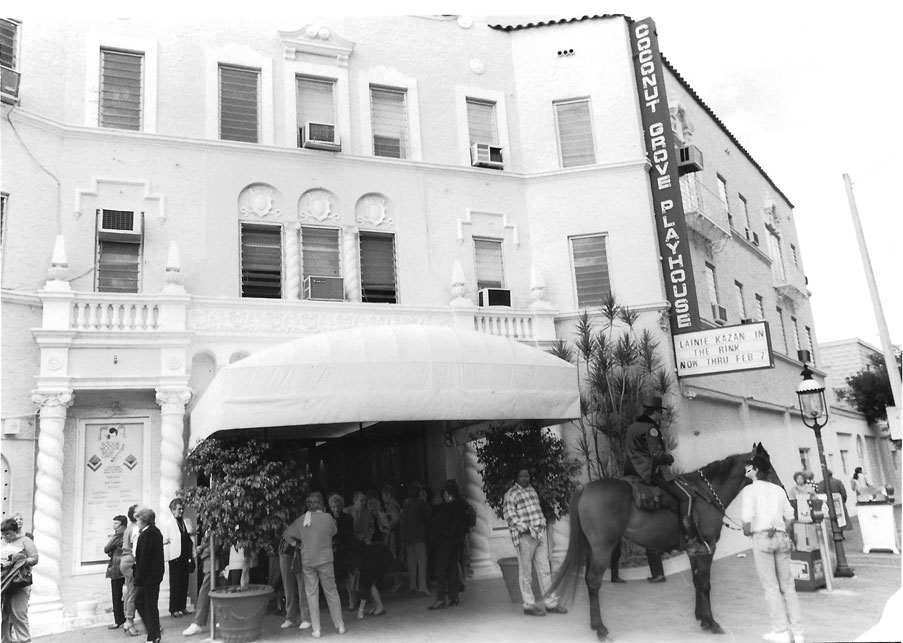 The fight to save the Coconut Grove Playhouse ends up in the lap of Miami city commissioners this week, as preservationists try to reverse a decision allowing a partial demolition of the cavernous and aging structure.
On the commission’s agenda today (6/22) is an appeal of the city’s Historic and Environmental Preservation Board’s granting an application for a special certificate of appropriateness for the partial demolition of the structure, the reconstruction of a theater, and the new construction of a public parking garage with residential units at the individually designated historic site known as the Coconut Grove Playhouse.
The famous venue at 3500 Main Highway in the Grove has been closed for more than a decade, as state, county and city officials debated its fate.
The certificate of appropriateness was sought by Miami-Dade County, which controls the property as a co-lessee with Florida International University and is advancing its redevelopment plan for the property.
The redevelopment plan would basically save and restore the front of the theater, demolish the larger auditorium and build a new 300-seat theater.
The historic and preservation board granted conditional approval of the special certificate of appropriateness April 4. Residents Barbara Lange and Katrina Moss appealed that decision.
The county deemed the board’s April 4 vote as approval of the master plan concept.
This approval provides the framework for the design team to continue to develop the plans that will allow restoration of the front building to the 1927 design by noted architects Richard Kiehnel and J.B. Elliott, and development of the new 300-seat theater with supporting amenities, county officials said.
Once drawings are further developed, the team plans to return to the board to request a certificate of appropriateness for the building components.
The grandiose 90-year-old playhouse has sat vacant and deteriorating since it shut down in 2006 after financial woes strapped the group in charge. It is owned by the state.
The property is now under control of the county in a long-term agreement with FIU, and a key player is Michael Spring, director of the county’s Department of Cultural Affairs.
Plans to resuscitate the state-owned theater began to come together in 2013 when the county announced an agreement with the university. The state approved FIU’s business plan, which allows the university – in partnership with the county – to have a 50-year lease of the theater, with a possibility of two 25-year renewals. The long-term lease was signed in October 2013.
In early 2014, the county announced it had met a deadline to clear up old debts and encumbrances related to the property, requirements of the state before the lease could take effect.
It took a few more months for all old debts to be handled, but in July 2014 Mr. Spring told county commissioners that all had been resolved, finally clearing the lease paperwork with the state.
In April 2015, county commissioners approved allowing GableStage, a Coral Gables nonprofit, to run a 300-seat theater in the playhouse.
The county hired architectural firm Arquitectonica to create a master design plan for the playhouse property.
The county’s design team includes Arquitectonica and historic preservation architect Jorge Hernandez.
The overall master plan includes construction of a garage, to be owned and operated by the Miami Parking Authority.
Authority CEO Art Noriega reported on the playhouse status to the city’s Off-Street Parking Board on June 7, noting the appeal was headed to city commissioners this week.
“We’ll be there to support it,” Mr. Noriega said of the county’s master plan.
While details of the size and scope of the garage were still being worked out between the authority and county officials, Mr. Noriega said the garage will serve the theater and the Grove, and will be lined with residences.
The playhouse is a three-story Mediterranean Revival style building designed with distinctive exterior features of cornices, parapets and twisted columns. It was considered one of the most distinctive movie theaters in the US when completed in 1927.
The mass of the building is arranged as two wings that hug the sidewalk, bridged by the highly ornamental entrance bay, which is canted at the junction of Main Highway and Charles Avenue. The main entrance originally had an exterior stone fountain in front of the wrought iron gates that led to the main lobby. Storefronts were housed on the ground floor, offices on the second level and apartments on the third.
The comparatively unadorned auditorium chamber of the theater lies beyond the elaborate entrance, according to a county report.
Significant alterations focused on reducing the size of the audience chamber to create a larger lobby/dining space, changes in the lobby and auditorium floors and the addition of a mezzanine level to the theater all significantly eliminated the original interior features, the report says.