Advertisement
The Newspaper for the Future of Miami
Connect with us:
Front Page » Top Stories » Miami-Dade looking at criminal courts needs 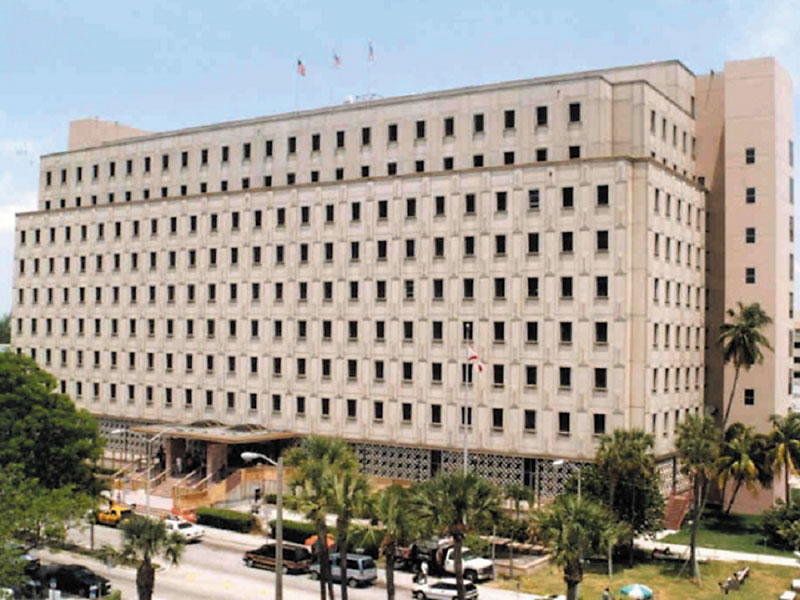 County Commission Chair Esteban Bovo Jr. believes Miami-Dade must take care of its imprisoned.
“This was one of our priorities,” he said last week during his Policy Council meeting. “We’ll never be a society that doesn’t have people incarcerated, but it matters how we treat them. We have custody of these people and must be mindful of that.”
The council got an overview of county facilities, including the Richard E. Gerstein Justice Building, the main criminal courthouse, built in 1958, which houses all of Miami-Dade’s criminal circuit courts, most of its criminal county courts and the Miami-Dade Clerk of Court’s criminal division.
Theresa Therilus, assistant director of Internal Services, who spoke on behalf of Director Tara Smith, said there are 45 courtrooms, and between 1996 and 2016 the department spent $13.5 million on capital improvements including the roof; the air conditioning, electrical and fire alarm systems; and elevator additions.
A re-certification report found the criminal courthouse to be electrically safe, Ms. Therilus said.
In the next three years, the department plans an elevator addition and air conditioning improvements with $4.8 million in General Obligation Bond funds. Funding has not been identified yet for the next five years but the department would like additional work, including a new roof and restroom upgrades.
The courthouse is in good condition for its time but the Internal Services Department continues to work on it, Ms. Therilus said.
Commissioner Rebeca Sosa cited problems in the criminal and civil courthouses. She asked if the county can create “a big scope” to fund construction.
“Should we keep fixing or rebuild?” Ms. Sosa asked. “Let’s look at what we have and see if we can get all the funds needed and build a new one.”
Deputy Mayor Edward Marquez said the department has been looking at all its needs. “There’s space around the other courthouse with a P3 [public-private partnership] if necessary. Let us get through what we’re doing now,” Mr. Marquez said.
Commissioner Dennis Moss requested that the county commission schedule a look at “individuals charged with crimes and being let out on the street and committing more.” He said the discussion might be through the Policy Council, the Building Safer Neighborhoods Subcommittee or the Health and Public Safety Subcommittee to get some of these things under control. Mr. Moss said a lot of people in his district are being arrested two times for weapons possession and being let back on the streets.
Commissioner Audrey Edmonson said she has found the same pattern in her district. She said gangs that started in the 1970s are starting the same patterns of behavior.
Mr. Bovo asked if such a big facility is needed downtown and whether it could be downsized. He said the Policy Council’s intent is to take a field trip next month to see the facility.
Daniel Junior, interim director of the Corrections and Rehabilitation Department, gave an update on the Detention Center. It’s the eighth largest correctional system in the US, with 204 sworn correction officers and 3,800 to 3,900 inmates daily on average, he said.
In 2008, the average daily population was over 7,000 and the downward trend over the last nine to ten years is consistent with national trends, Mr. Junior said.
The action plan, he said, is to take $30 million left from $47 million in General Obligation Bond funds and use it “to address infrastructure issues and meet unmet needs.”
Mental health inmates are currently being taken care of at Miami-Dade’s Turner Guilford Knight Correctional Facility, which meets all standards, said Jennifer Moon, director of the county’s Management and Budget Office. The county, she said, is looking into a mental health facility on Seventh Avenue. Ms. Moon said there are issues related to subleasing the facility.
In a few months, Ms. Moon said, the administration will update the commission on the mental health diversion facility, which would provide multiple services.