Advertisement
The Newspaper for the Future of Miami
Connect with us:
Front Page » Government » City’s kick can block Miami Beckham United stadium deal 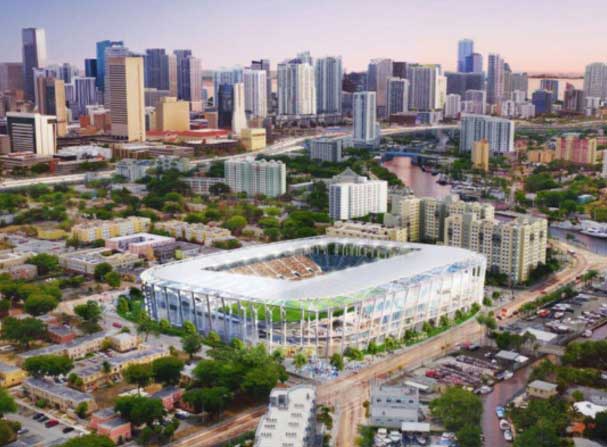 A last-minute change to a deal between Miami-Dade County and Miami Beckham United clearing the way for the firm to buy county land for a Major League Soccer stadium in Miami has left City of Miami officials crying foul.
Among conditions the county commission set June 6, one would require Beckham’s group to hire county police and emergency responders for off-duty work inside the planned 25,000-seat Overtown stadium.
By agreeing, Beckham’s group may have created another roadblock for itself – after years of false starts and just when it was gaining momentum.
In order for the stadium to rise, the group will need zoning changes and a street abandonment by the city.
Miami Mayor Tomás Regalado hinted the issue of how city police and fire officers are used at the stadium may become a bargaining chip as the group tries to move ahead.
On the heels of the county’s decision to a sell 2.79 acres to Beckham’s group for $9 million to join with about 5.82 acres it already owns, city elected leaders were quick to denounce the 11th hour amendment that would limit city police and paramedics to work outside the stadium.
City commissioners joined the mayor June 8 in expressing serious concern about what they saw as a county overreach.
Mayor Regalado said he has asked the city attorney’s office to research the legality of the county commission decision.
To require a private party to employ county police and paramedics inside a private venue is wrong, said Mayor Regalado, and sets a bad precedent. “The point is, this is a private venue in the City of Miami,” he said.
“I don’t want to rain on anybody’s parade,” said Mr. Regalado. Some people may say the city is just trying to block the deal, but he said that is not the case.
The mayor spoke of what lies ahead for Beckham’s group at the city level: “This is not right for our City of Miami police, our City of Miami firefighters, and our residents … so hopefully this will be fixed – if not, when it comes before you for the zoning change, maybe we can say…”
Commissioner Francis Suarez quickly interjected a motion supporting the mayor’s request that the city attorney provide an opinion on the county’s action; objecting to the county’s last-minute amendment; and directing the city manager to make sure that “our first responders are protected in any negotiation, deal, land sale, and/or zoning matter, and that that be incorporated into our negotiations.”
It was approved unanimously.
An attorney representing the Beckham group said recently it could be six months before the group is ready to make requests of the city government.
After the fanfare of Beckham’s announcement several years ago to bring a Major League Soccer team to Miami, several preferred sites for the privately-funded stadium were put off limits or were rejected, including PortMiami, the FEC slip next to AmericanAirlines Arena, and the area next to county-owned Marlins ballpark in Little Havana.
In December 2015, Beckham’s group announced the latest location, at 650 NW Eighth St. in Overtown.
The bulk of the land is a city block bounded by Northwest Eighth and Seventh streets and Northwest Seventh and Sixth avenues, two blocks north of the Miami River.