Advertisement
The Newspaper for the Future of Miami
Connect with us:
Front Page » Transportation » Brightline rail will start with deeply discounted fares 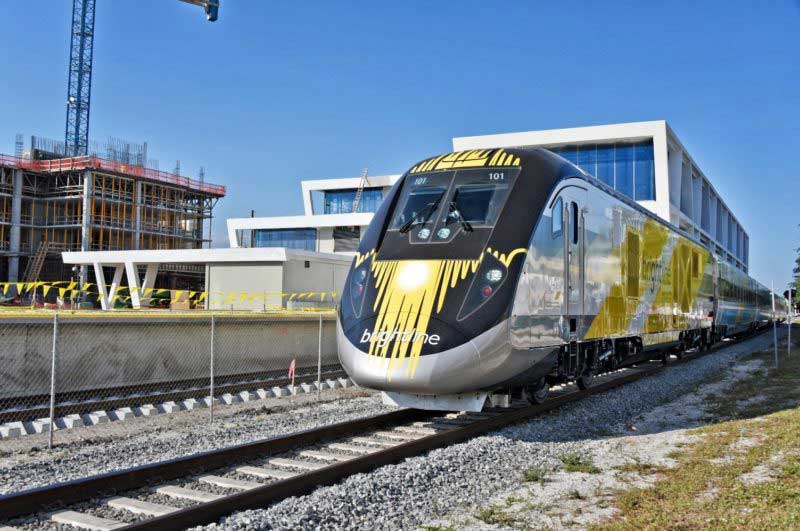 The new Brightline rail service linking Miami to West Palm Beach with a stop in Fort Lauderdale will start with deeply discounted fares when it takes its first runs in late summer and offers full service in the early fall, CEO Dave Howard says.
While he wouldn’t reveal the fare structure, Mr. Howard told a Greater Miami Chamber of Commerce transportation meeting last week that the discounted cost is “going to be less than the cost of driving your car.”
Fares, he said, won’t be revealed until just before operations begin. He did not provide specific dates.
The full service in the fall, he said, will amount to 32 round trips daily between Miami and West Palm Beach.
The West Palm Beach and Fort Lauderdale stations, built expressly for the Brightline service, are getting their final touches, Mr. Howard said, while the massive station complex in downtown Miami handled by parent All Aboard Florida continues to rise.
Asked to predict the status of the railroad next June, he said that Brightline will then be on the way to carrying 3 million passengers a year.
“The railroad is the answer of the future,” traveling on a line that was built by railroad magnate Henry Flagler just before 1900. “What an awesome opportunity to reinvent that system.”
The railroad as conceived by its owner, Coral Gables-based Florida East Coast Industries, was to be a link between Miami and Orlando, linking to Orlando’s cluster of globally known theme attractions. But communities along the route have tried to sidetrack the planned operations, delaying that longer part of the run.
Mr. Howard said only that the Brightline will be “ultimately connecting to Orlando in phase 2 of our project.” He did not provide an estimate of how long that might take.
He did note, as he has in the past, that no privately funded passenger rail service has been completed in the US in the past 100 years. “This is a privately funded project that has enormous public benefits,” he said.
He said the level of service planned on the line now exists nowhere in the nation.
That might help to cut into the car-centric culture in the region.
“Yes, we need to change behavior, Mr. Howard conceded, “but the behavior that we have to change is painful. So it should be relatively easy” to motivate South Floridians to ride the rails rather than suffer in heavy traffic.
As for the impact on the community, Mr. Howard, who arrived here in March from New York, where he ran sports-oriented organizations, said that he hears a lot from employers about dependency on cars impeding business growth. “They can’t afford to lose people for hours in the day in their cars just to attend meetings,” he said.
As for getting Millennials to ride the Brightline, he said that the generation is much more favorably inclined to alternative travel modes than their elders and they already feel connected to city centers. Brightline, he said, is one of the solutions to connect the cities together.
Mr. Howard said that the owners of the Brightline feel good about their investment. The cost was low, because they already owned the right-of-way. At a cost of a little more than $1 billion for the five train sets and stations combined, he said, “this is actually an extraordinarily efficient investment.”

16 Responses to Brightline rail will start with deeply discounted fares