Advertisement
The Newspaper for the Future of Miami
Connect with us:
Front Page » Government » Miami sets goal of opening riverfront park downtown

Written by John Charles Robbins on May 23, 2017
Advertisement 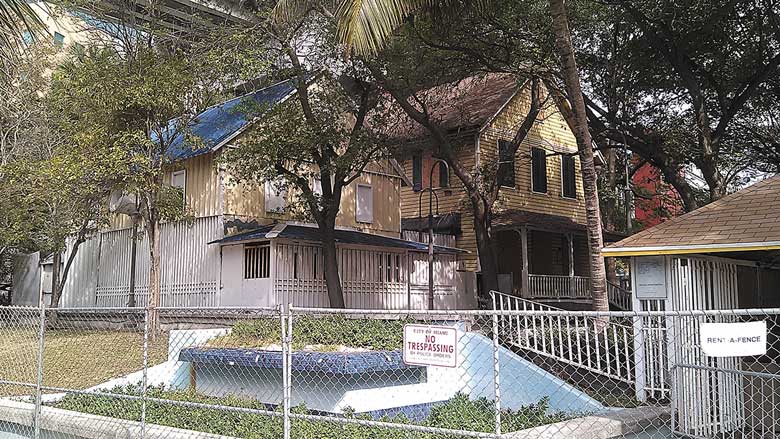 Miami officials are preparing to immediately restore one of the city’s most historic houses, with a tentative goal of reopening part of a riverfront park downtown.
The Miami River Commission learned May 19 that Fort Dallas Park, with its improved riverwalk, would again be open. Long-term goals for the city site may include a lease with a restaurateur and tie-in educational and historical uses.
For the most part, the 60-64 SE Fourth St. site has been fenced off and forgotten for several years, attracting trash and the homeless.
Several structures occupy the site on the river’s north bank sandwiched between a hotel on private property and the county’s Riverwalk Metromover station. They include a gutted former restaurant and The Flagler Worker’s House, called Palm Cottage, the last known Miami building directly associated with railroad magnate and developer Henry M. Flagler.
For many years, seafood restaurant Bijan’s served there under a lease with the city. But amid litigation and allegations of unpaid rent, it shut down. Legal battles have been settled, yet the park remains in limbo.
More than a year ago, the city requested letters of interest to reactivate the site with a restaurant. At the time, the city was offering only a five-year revocable license and it didn’t secure an operator/tenant.
At the May 19 meeting, Mark Burns, a lease manager with the city’s Department of Real Estate and Asset Management, said a structural assessment of The Flagler Worker’s House is being made and the city intends to shore up the home to get it into “acceptable” condition, “then we’ll consider reopening the area.”
Flagler’s Florida East Coast Railway established Fort Dallas Park in 1897. It became a city park in 1983. The river commission has lobbied to reopen the site, with access to the improved riverwalk and city dockage.