Advertisement
The Newspaper for the Future of Miami
Connect with us:
Front Page » Communities » Downtown offers wish list for Miami general obligation bonds 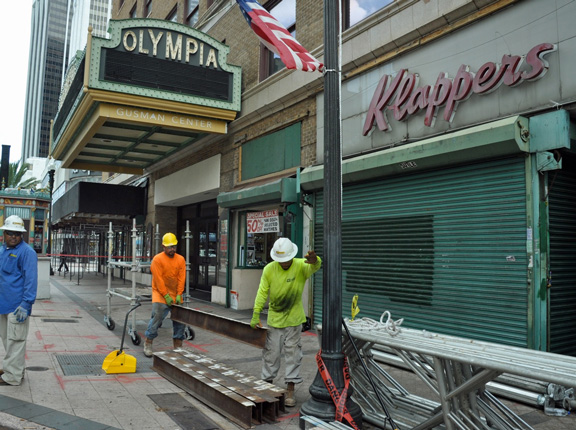 Directors of Miami’s Downtown Development Authority say they are generally in favor of the City of Miami’s plan to seek a $275 million general obligation bond issue. But several added that there also must be changes in the city’s Capital Improvements Program (CIP) before any potential bond-funded projects get started.
The authority produced a wish list at its meeting Friday. Among priorities are Baywalk and Riverwalk, waterfront open spaces for pedestrian and cyclists ($25 million), Biscayne Green to create an urban plaza on Biscayne Boulevard ($20 million), renovation of the Olympia Theater and office building ($26 million), matching funds for the Baylink extension of Metromover to Miami Beach ($10 million), a Brickell tunnel under the Miami River ($20 million), Complete Streets conversion of North Miami Avenue, Southeast/Southwest First Street, and Northeast/Southeast First Avenue downtown ($8 million), development of two docking areas for waterborne transportation ($2 million), two additional permanent public restrooms ($400,000), and new and enhanced lighting ($2 million).
Chris Rose, Miami budget director, told the group that if the bonds are issued they won’t raise taxes, though property taxes may decrease slightly if bonds aren’t issued. “It’s a good time to go forward; interest rates are low and the city has the best bond rating [AA] in, possibly, ever.”
Authority Vice Chair Neisen Kasdin, office-managing partner of Akerman LLP, asked how tied the city would be to the wish lists of various entities, including the downtown authority.
“Part of the resolution will be a list of projects, but that list can change,” Mr. Rose said. An advisory committee would review projects to see that the money is spent efficiently, he added.
“Through experience, I’ve learned that rigidity in a GOB isn’t desirable,” Mr. Kasdin said. “Realistically, two to four of the projects will not get done. We need to build in a mechanism” so that the money can be allocated elsewhere.
“Flexibility is good,” said Ken Russell, authority chair and Miami commissioner. “I’m finding a public willingness for this. In the past there have been concerns that a bond might create a slush fund, so there need to be checks and balances.”
“Who would be tasked with executing these projects?” asked board member Jerome Hollo, vice president of Florida East Coast Realty.
When told it would be the Capital Improvements Program, board member Alicia Cervera, managing partner of Cervera Real Estate, asked incredulously, “The department that handled Flagler Street?”
A long-running dispute has simmered over what the authority says is the department’s mismanagement of the Flagler Street renovation from the Dade County Courthouse to Biscayne Boulevard.
Construction began in early 2016, but to date, only one block has been completed. Authority members faulted the department for not supervising the contractor, F.H. Paschen, which the city ultimately fired from the project.
“They cannot handle the scope of these projects,” Mr. Hollo said. “We need to take a hard look at Capital Improvements. There are a lot of issues that have to be cleaned up.”
“We’ve had that same discussion,” Mr. Rose said. “We have to make sure we can do these projects.”
“You’re dealing with the same staff,” said board member Gary Ressler, principal in the Tilia family of companies. “No clear picture and no accountability.”
“I second Jerry’s statement,” said board member Richard Lydecker, senior partner of the Lydecker-Diaz law firm. He suggested the authority have some role in whichever of its projects gets funded by the potential bond program. “The DDA should have some role on the front end, rather than cleaning up at the back end.”
As part of an agreement to back the bond program, the downtown authority could ask for a seat at the table when its projects are being planned and executed, Mr. Russell said, and “insist that the CIP start to look at its philosophy and practices.”
“Do more than look,” Ms. Cervera said. “There have to be consequences. None of us would put up with this in our companies.”