Advertisement
The Newspaper for the Future of Miami
Connect with us:
Front Page » Transportation » Air rights play role in bringing passenger rail service to Miami

Written by John Charles Robbins on May 23, 2017
Advertisement 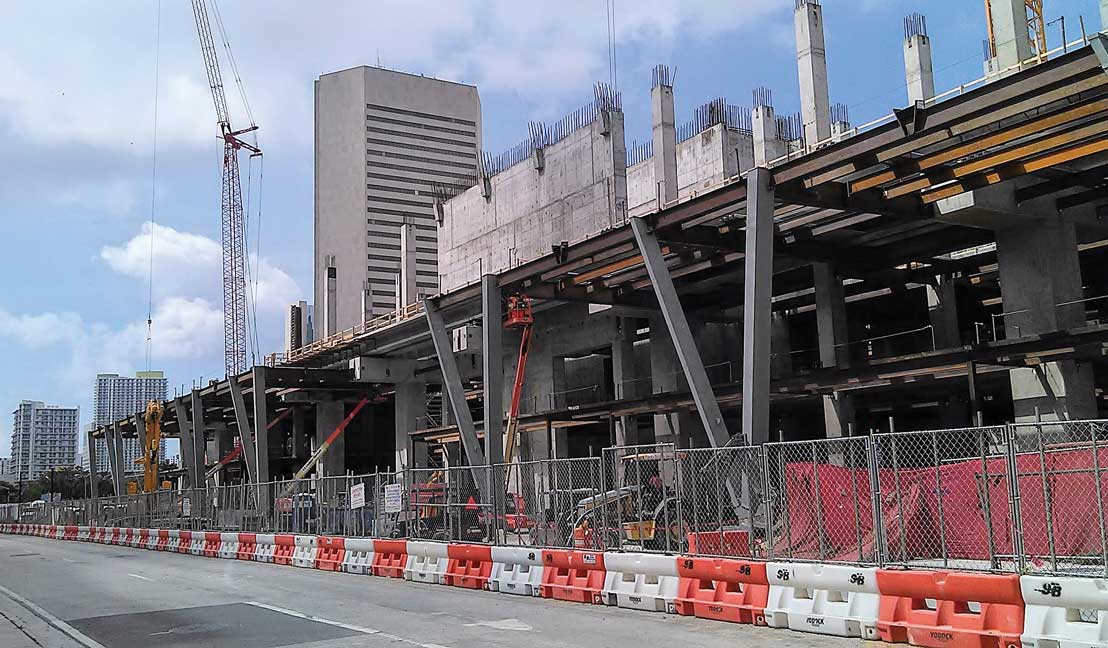 Land swaps, road realignment, right-of-way access and even air rights have come to play a role in bringing passenger rail service – and more – back to downtown Miami.
Another major piece to the MiamiCentral transportation hub, now under construction paralleling Northwest First Avenue, is a proposed airspace easement from the City of Miami.
City commissioners have the item under consideration for a vote today (5/25).
The resolution would authorize the city manager to execute an aerial easement with DT Miami LLC for All Aboard Florida railroad terminal encroachments over and across city right-of-way known as Northwest Third Street, between Northwest First Avenue and Miami-Dade County Metrorail north corridor right-of-way.
A background memo on the resolution says DT Miami received approval from the county to build a railroad terminal project that includes a terminal of the All Aboard Florida passenger rail system, office, retail and residential development, known as MiamiCentral.
The county’s approval requires the construction of an elevated pedestrian connection between the project and the adjacent Government Center Metrorail Station.
The airspace easement will make the connection possible.
The resolution says the city wants to grant DT Miami an easement so it can construct, maintain and access the improvements “to allow safe and reasonable aerial access between the station and connecting adjacent parcels to the station, to the Miami-Dade Governmental Center Metrorail Station.”
With work commencing in 2014, the 11-acre site just north of the county courthouse and the county’s Stephen P. Clark Center is being redeveloped as a major transportation hub called MiamiCentral, rising where the city’s first train station once stood.
MiamiCentral is on track for an opening this year, followed by development of apartments, shops, offices and other companion commercial uses.
The new rail station is being integrated with county Metrorail and Metromover systems, and is being considered a transit hub for the city with connections to buses, trolleys, taxis and more.
Its primary function is home to a new passenger rail service called Brightline. MiamiCentral will also house a Tri-Rail link.
Part of Northwest First Avenue will close to public use so it can be realigned as part of the redevelopment by All Aboard Florida.
Last summer, city commissioners approved the closure, which impacts Northwest First Avenue between Northwest First and Second streets.
Applicants for the street closure were DT Miami A LLC, DT Miami B LLC and the City of Miami.
The resolution closing the street says the purpose is to annex the closed section of Northwest First Avenue into the approved Tract A, and to realign it with North Miami Court.
“The reason for the request is to further unify a development site for the redevelopment of Flagler Gran Central Station (part of the All Aboard Florida rapid transit facilities),” the resolution says.
The realignment will basically straighten out the curve of that section of Northwest First Avenue.
In March, express passenger rail service Brightline announced target dates for service launch in South Florida, with introductory express service between West Palm Beach and Fort Lauderdale beginning in late July, followed by service to Miami in late August.
The company says it anticipates a grand opening and official launch of the train service in September.