Written by John Charles Robbins on May 16, 2017
Advertisement 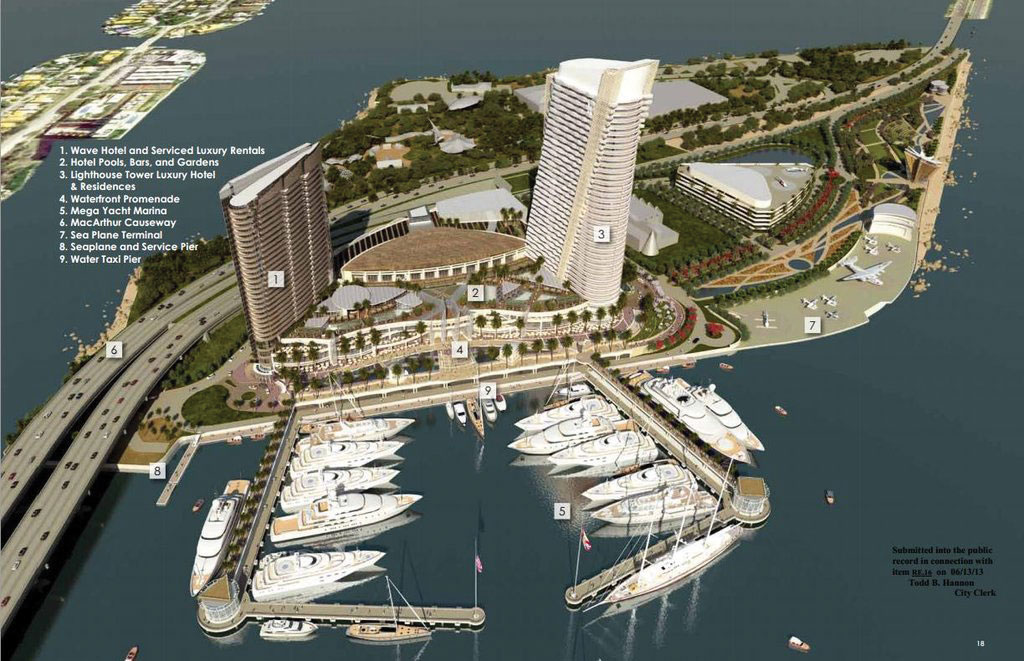 Instead of a mega resort for the rich called Island Gardens, Ken Russell sees Watson Island as home to a multimodal transit hub with plenty of wide open green space offering “the most amazing views of our downtown skyline.”
The City of Miami commissioner shared his vision for the city-owned island at the tail end of the commission’s May 11 meeting.
Mr. Russell vowed to bring a motion at the May 25 meeting to find developer Flagstone Property Group LLC in default of a much-amended 15-year-old agreement.
Mr. Russell wants the city to take back its property, which would include a $27 million deep water marina opened in January 2016, the only component of Island Gardens to be completed.
The marina, christened Deep Harbour, boasts of being North America’s only marina designed exclusively for super-yachts.
For its part, Flagstone representatives continue to defend the company, saying it has done its best to meet deadlines while wrestling with financial and economic issues, litigation and other impediments.
The city owns the 6.5-acre site on the northwest side of the barrier island connecting the City of Miami and Miami Beach via the MacArthur Causeway.
City voters approved leasing the land to Flagstone for the development back in 2001.
Flagstone has been paying $2 million a year rent. Critics of the project claim the rental fee is based on outdated appraisals and have said the city should be reaping more than triple that amount.
The overall development, estimated to cost from $640 million to more than $1 billion, is to include a five-star luxury hotel, a four-star lifestyle hotel, fractional ownership residences, high-end retail and waterfront dining, in addition to the marina.
While the developer did complete and open the marina last year, the bulk of the site has remained vacant and unused for more than 15 years.
Mr. Russell, vice chairman of the commission, has the island in his district. Since his election in 2015, he’s hinted his desire to recapture the city land from the developer.
On Thursday, Mr. Russell said he asked to discuss Flagstone because he’s frustrated by the more than dozen years of inactivity and excuses.
Mr. Russell read from a prepared statement: “It has been more than 15 years since the City of Miami and our voters gave the right to develop our public land on Watson Island to Flagstone. Ever since, we’ve entertained a litany of excuses as to why very little of the project voters approved has been built.”
Mr. Russell told his fellow commissioners they have a pretty clear-cut issue facing them: that Flagstone is in default.
He said Flagstone had a deadline of May 1 to have all material permits approved and actually begin construction by May 1.
“I understand they moved some dirt around a few days before to try to convince us that construction had begun, and that’s not the first time they’ve done that, by the way,” said Mr. Russell.
“The phased permit expired and was not renewed before [May 1]. The master building permit has not yet been obtained,” Mr. Russell said.
He said the city has been waiting 15 years for Flagstone to deliver what it promised: a bustling neighborhood, two five-star hotels, a fish market and yacht marina.
“Back then, the city was looking to attract signature projects that would pump up our local economy. Midtown didn’t yet exist. Wynwood as we know it today didn’t exist. Downtown and Brickell were a shadow of their current form,” he said. “We didn’t have the Arsht [performing arts center], the Frost [science museum], the Pérez [art] museums. Most of all, we didn’t have the congestion and infrastructure needs that we do now. And yet here we are, 15 plus years later, still talking about Flagstone.
“At this point, I have to ask, is Flagstone even relevant anymore to the vision of what our public land on Watson Island could and should be? Is this project – should it ever be built, and I’m pretty skeptical about that – what Miami needs and deserves?”
He continued, “The voters spoke back then, but if they spoke today, what would they say?”
Mr. Russell said if the city got to decide the fate of the property, he would advocate for a request for proposals that has a developer implementing a multimodal transit hub that connects and finances the Baylink and water taxis.
It could be the point of public transit to all of the best amenities on the island, he said, including beautiful green spaces with great views.
“But the voters don’t have a say unless this developer is in default, and I believe that they are,” he said.
Mr. Russell had hoped to vote on the matter May 11, but some commissioners preferred to give the matter time and have it formally placed on the May 25 agenda.
On concluding his remarks, Mr. Russell said, “The city has lost millions in undervalued rent. The only silver lining is that we can now look at the land in the context of our needs today. I hope for your support in giving the voters this long overdue chance.”
Commissioner Frank Carollo indicated his support, reminding everyone of his past statements which are echoed by Mr. Russell and others.
And Mr. Carollo mentioned his unsuccessful attempts in recent years to find Flagstone in default and get the prime waterfront land back in the city’s hands.
Mr. Russell’s resolution is expected to direct the city administration to issue a notice of default to Flagstone and direct the city attorney and auditor general to conduct an analysis of the agreements to see if there are other breaches as well.
Mr. Russell said he believes the city is entitled to keep all prepaid construction based rent, reclaim the upland and take back the marina component.
Island Gardens Deep Harbour marina is open and offers 5,000 linear feet of capacity, accommodating an average of 50 yachts stretching up to 550 feet and drafts of 18 to 21 feet deep.