Advertisement
The Newspaper for the Future of Miami
Connect with us:
Front Page » Communities » Brickell Avenue Bridge driving won’t get any easier 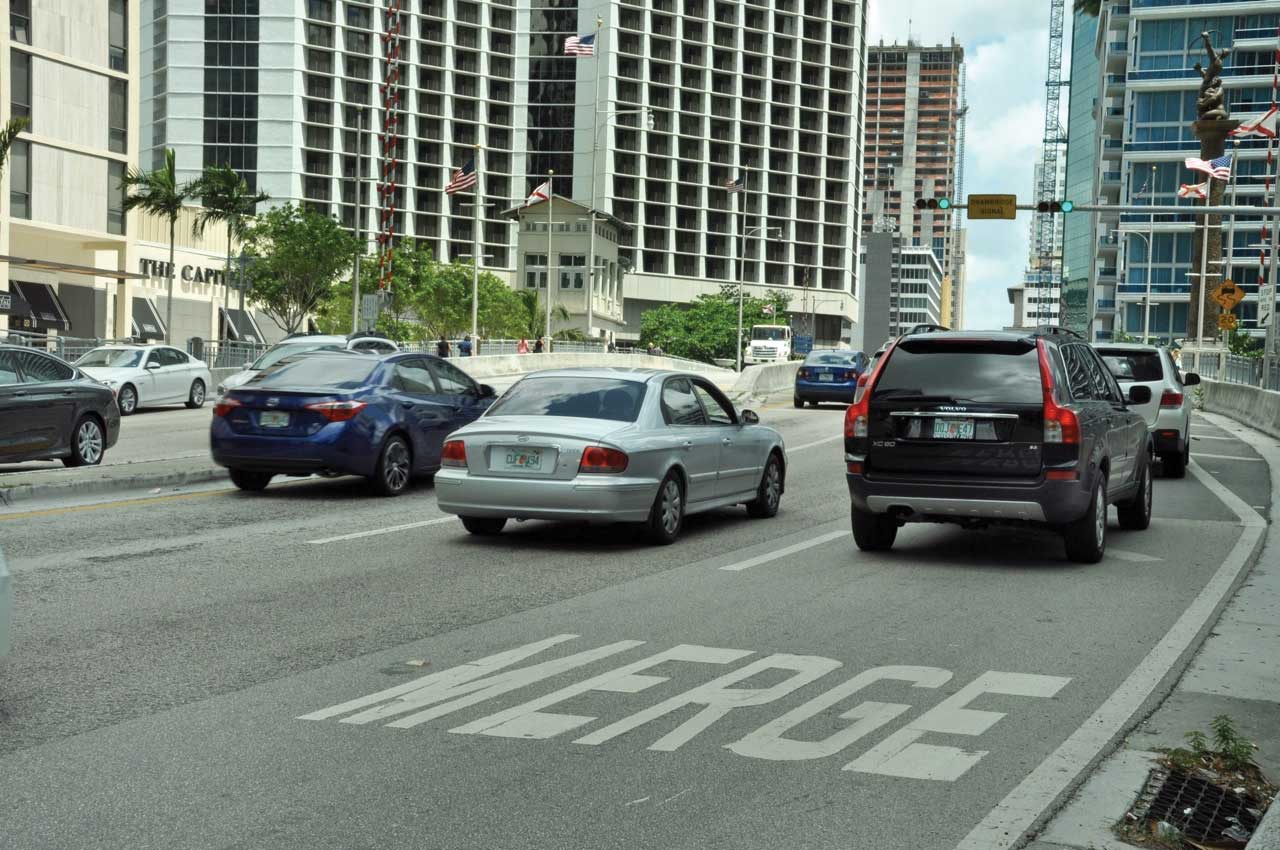 Drivers frustrated with the reduced number of lanes on the Brickell Avenue Bridge won’t see relief any time soon. In 2013, two traffic lanes were removed – one each north- and southbound – because of pedestrian and bicyclist safety issues.
“I met last week with staff to go over the northbound third lane of Brickell Bridge issue,” said Jim Wolfe, Florida Department of Transportation secretary for District 6, May 3 via email. “I am reviewing all of the concerns raised about the bridge.
“In this case, I found that the current lane configuration is warranted. When there were three right turns north of the river onto Biscayne Boulevard Way, the before condition, traffic could not handle the turn. The traffic island was heavily scarred from being run over, which made this pedestrian refuge unsafe.
“Many vehicles then proceeded to hit the Wells Fargo Building. The redesign to two right turns has substantially reduced this problem, improving safety for both pedestrians and vehicles. We also found that the lane reduction did not have an impact on traffic flow.
“To verify our traffic calculations, our consultant ran test vehicles in both in the before and the after condition finding no appreciable change in travel time,” Mr. Wolfe’s email said.
Advanced Traffic Engineering Consultants studied traffic on and around the bridge on Aug. 1, 2013, during six time periods of varying lengths between 7:30 a.m. and 2:30 p.m.
“The travel time for existing operations was compared to pre-construction operations to assess the impact associated with the new intersection geometry,” the consultant’s report said. “The evaluation revealed that northbound travel time was not significantly impacted, but rather decreased by approximately three seconds. The respective travel time was 3.72 minutes and 3.67 minutes, which statistically indicates little to no impact on northbound traffic time.”
But marine interests and area business people say they favored another plan, one that would leave lanes open and build a barrier in front of the Wells Fargo Center.
“I’m writing to express my opposition to FDOT’s current ‘trial project’ which resulted in the elimination of a northbound vehicular travel lane on the Brickell Bridge,” wrote Horatio Stuart Aguirre, chair of the Miami River Commission, on Aug. 12, 2013.
“The new need for drivers to merge from three lanes down into only two … while driving on top of the Brickell Bridge, makes backup longer and takes more time to restore traffic flow,” after a bridge opening, said his letter, written to Gus Pego, then District 6 secretary for the state transportation department.
The project also included the installation of a pedestrian and cyclist crossing light at the north foot of the bridge, but a May 12, 2015, letter to Mr. Pego from Jose Felix Diaz, Florida House representative for District 116, says that hasn’t worked.
“I respectfully request that FDOT’s … alternative #4 be replaced with alternative #1, which would restore desperately needed vehicular lanes and still provide the safety improvement on, and adjacent to, the bridge.
“It is my understanding that the FDOT video camera focused on the northeast side of the bridge frequently views cars running the ‘no right on red’ traffic light when the pedestrian or [cyclist] is crossing the intersection, incorrectly thinking it’s their turn, because the traffic light is red and the flashing beacon is indicating that it’s safe to cross.
“On March 24, 2105, the MPO’s Bicycle and Pedestrian Advisory Committee passed a unanimous resolution to recommend that FDOT suspend [the project] pending an area-wide study of see the impacts of the lane reduction,” his letter said.
On May 12, 2015, Mr. Aguirre wrote again, this time to the Miami city commission. “The community has been begging FDOT to please restore the removed lanes on and adjacent to the Brickell Bridge, and replace it with FDOT’s alternative #1, which still provides safety improvements without the unintended and negative consequences.”
He attached letters of support from Joseph Bier, executive manager of the Epic Residences; and Bob Murray, general manager of the James L. Knight Center, attesting to the traffic snarls that have frustrated residents, guests and employees at the two properties.