Advertisement
The Newspaper for the Future of Miami
Connect with us:
Front Page » Government » Miami may kick-start sports park on Virginia Key landfill 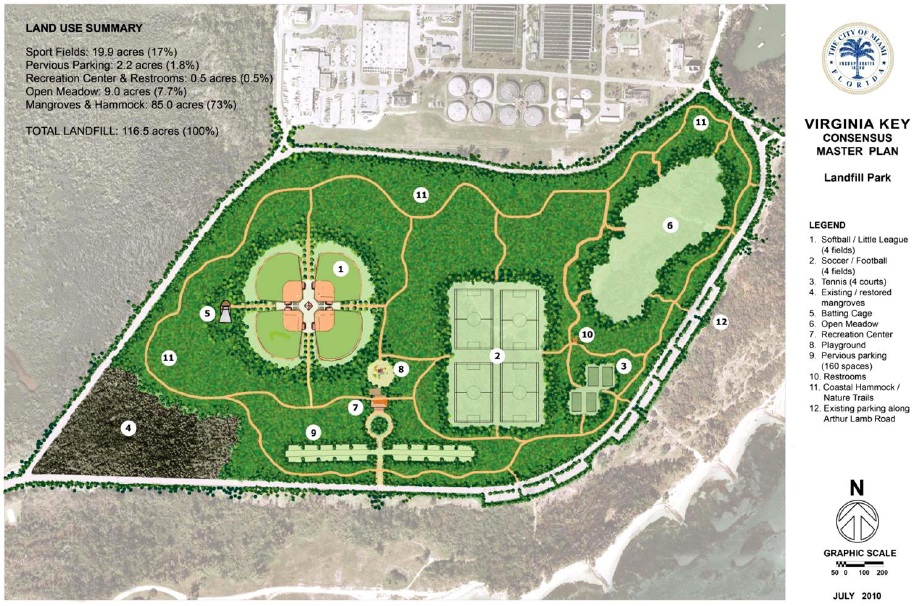 Miami Commissioner Ken Russell is ready to kick-start a sports park on an old Virginia Key landfill.
He made his pitch to the Virginia Key Advisory Board. He’d asked to discuss potential development of a sports and recreational facility on the city-owned key.
It’s not a new idea: it’s part of the 2010 Virginia Key Master Plan, which includes information on the landfill, the scope of a park on top of it, and a site plan of sporting fields, parking and more. It’s even referred to as Landfill Park.
“It is 116½ acres of open land – a blank canvas on which we can dream,” Mr. Russell told the board April 25.
“I wanted to bring it up here first… I’m hoping it sparks a discussion and leads to a recommendation to the city commission from you,” he said, noting he hadn’t discussed the idea with commissioners or the city manager’s office.
“Park space is so limited in the city,” he said. “If we start planning this now, we can get it right.”
Board members agreed there’s a lack of city park space. Without a vote, they supported pursuing a sports park there.
Members did ask that Jeovanny Rodriguez, director of the city’s Office of Capital Improvements, and a representative from the county report on the status of remediation at the site at the board’s May 23 meeting.
“We have some time. The county is still remediating until 2018,” said Mr. Russell.
Board member Blanca Mesa said, “We would like an update on what’s happening with remediation. It will dictate what happens there.”
According to the master plan, the centrally-located site formerly was a municipal and regional dump. It’s south of the Miami-Dade County Sewage Treatment Plant. The city has a commitment from the county to close and remediate the landfill.
“The closure plan has provided impetus for creating a premier regional park for the City of Miami that caters to the needs for active recreation, environmental education and supporting facilities that will add varied opportunities to provide fitness and education for users of all ages,” says the master plan.
The plan’s proposed improvements include a recreation center with restrooms, multi-use recreation space, classrooms, offices, locker rooms and covered outdoor terraces.
There are 19.9 acres of sports fields for competition in softball, little league, football and soccer, and a 9-acre open recreation meadow for informal play. An ADA accessible playground, batting cages and four tennis courts would provide additional active recreation.
The balance of the proposed park is 85 acres of trees with multi-use nature trails that connect to all park facilities. The park is also served with amenities such as picnic areas and a nearby 160-space parking lot, in addition to existing parking along Arthur Lamb Road.
“I do like open recreation,” said Mr. Russell, but suggested staying open minded to consider non-traditional sports.
As for specifics sports, he suggested leaving room for the community to weigh in: “Maybe there are voices out there we’ve not heard yet.”
Kevin Kirwin, city’s parks department head and a non-voting board member, said: “It can be a really great park for the City of Miami.”