Advertisement
The Newspaper for the Future of Miami
Connect with us:
Front Page » Business & Finance » Blumberg Grain marshals resources in Algeria deal

Written by Marilyn Bowden on May 2, 2017
Advertisement 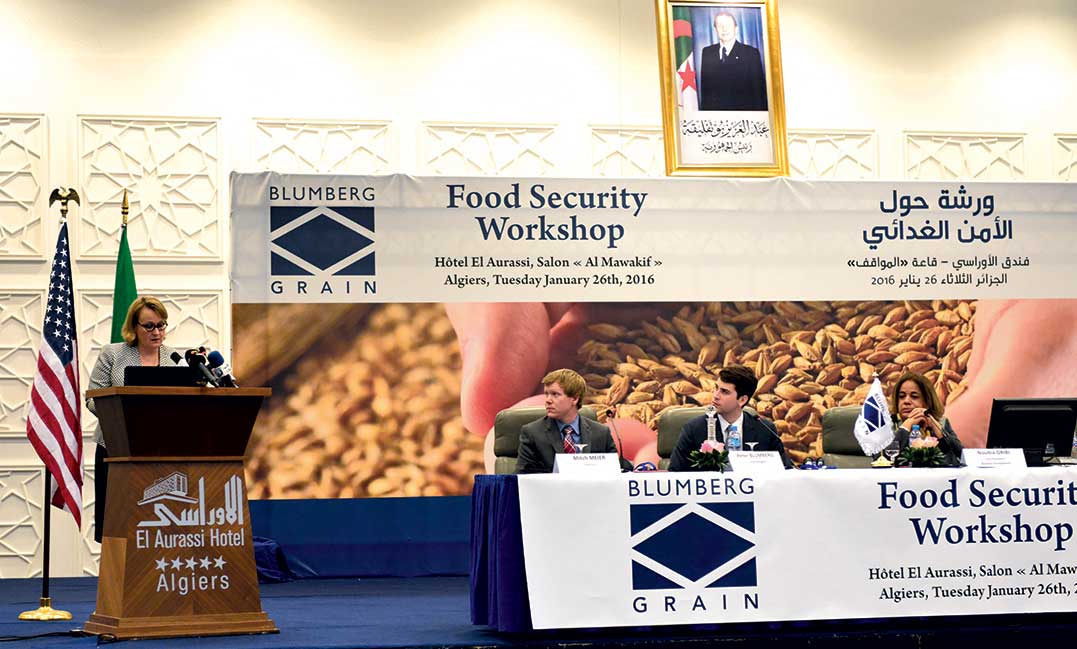 Miami-based Blumberg Grain’s mega-project to build state-of-the-art grain storage facilities across Algeria – estimated by David Blumberg, the company’s CEO for the Middle East & Africa, to save the country some $200 million in post-harvest losses – seems stymied by internal politics.
Philip Blumberg, founder & chair of holding company Blumberg Partners, says he is confident growing support in Washington, DC, may provide the motivation to clear the necessary hurdles.
In March 2016, he says, he met with Algerian Prime Minister Abdelmalek Sellal, who had heard about Blumberg Grain’s other projects in the region, including a network of 100 storage facilities in Egypt monitored and controlled by a single command control & logistics center in Cairo.
Prime Minister Sellal was eager to implement a similar system in Algeria. With the country’s president also on board, Philip Blumberg says, a contract was drawn up for the first phase of a project that would “remake Algeria’s failing grain storage system in two phases – some 200 sites for the storage of over 1 million metric tons of wheat.”
Thirteen months later, despite continued assurances from Prime Minister Sellal, the contract remains unsigned.
Blumberg Grain works primarily with emerging market governments to develop networks of food storage infrastructure that reduce post-harvest losses from more than 50% to less than 5%, says David Blumberg, often doubling the nationwide output of locally harvested crops.
“We have support in Algeria at a number of different levels,” he says, “including the president, the prime minister and the minister of industry. Farmers are absolutely demanding this because they’re looking at a potential bumper crop this year – but that could dissipate because there’s nowhere to put it.”
A recent article in Le Courrier d’Algérie – a daily newspaper published in the capital city of Algiers – cites the potential loss of much of the promising 2017-18 harvest to rainfall, rodents and birds due to “antiquated means of storage” such as open-air plots and old, unsuitable hangars before making an impassioned plea for “a modern storage infrastructure with international standards.”
The impasse, says Philip Blumberg, appears to stem from a tendency of bureaucrats in the region to thwart the will of elected officials, perhaps rooted in an anti-American bias dating from Algeria’s alliances with the former USSR.
At the Algerian government’s insistence, he says, Blumberg Grain has gone so far as to provide them with the proprietary design and engineering drawings for its systems, “so denying these projects would be very problematic to us and our suppliers. It’s possible that the Algerians will try to do the project themselves or provide our designs to Chinese or Russian entities to implement.”
“We are marshaling all our resources to achieve a resolution in Algeria,” says David Blumberg, who has so far made 44 trips totaling 130 days to Algiers. “But it’s nearing a point of our abandoning the project.”
Those resources include support from the highest levels of the US government.
“Several senators and congressional representatives are presently intervening with the Algerian ambassador,” David Blumberg says, “to help resolve this issue before the Algerians face a more public and damaging conflict with Congress, President Trump and the media.”
“This would be Algeria’s third major lawsuit from a US company,” says Philip Blumberg. “I’m finding that people in Congress are running out of patience with these lawsuits, and they are behind us.”
Among many who have sent letters to the Algerian ambassador supporting the project are Rep. Debbie Wasserman-Schultz of Florida, immediate past chair of the Democratic National Committee; Rep. Ileana Ross-Lehtinen, a Miami Republican who just announced her upcoming retirement from Congress, and Jeb Hensarling, a Texas Republican who chairs the House Financial Services Committee.
Adding their voices to these appeals are several suppliers who work with Blumberg Grain on large international projects, stating that they have already invested significant time and resources on the Algerian project since it was sole-sourced to Blumberg Grain more than a year ago.
President Trump is watching the issue with interest, Philip Blumberg says, since it would involve the creation of 2,400 jobs in the heartland – “Trump country, where he has promised more jobs as part of his Hire American Buy American program.
“We certainly don’t think this will get to a lawsuit,” he says, “as we know the prime minister and other leaders are strongly advocating for this project. We feel confident that the prime minister and president will prevail and make Algeria food-secure.”