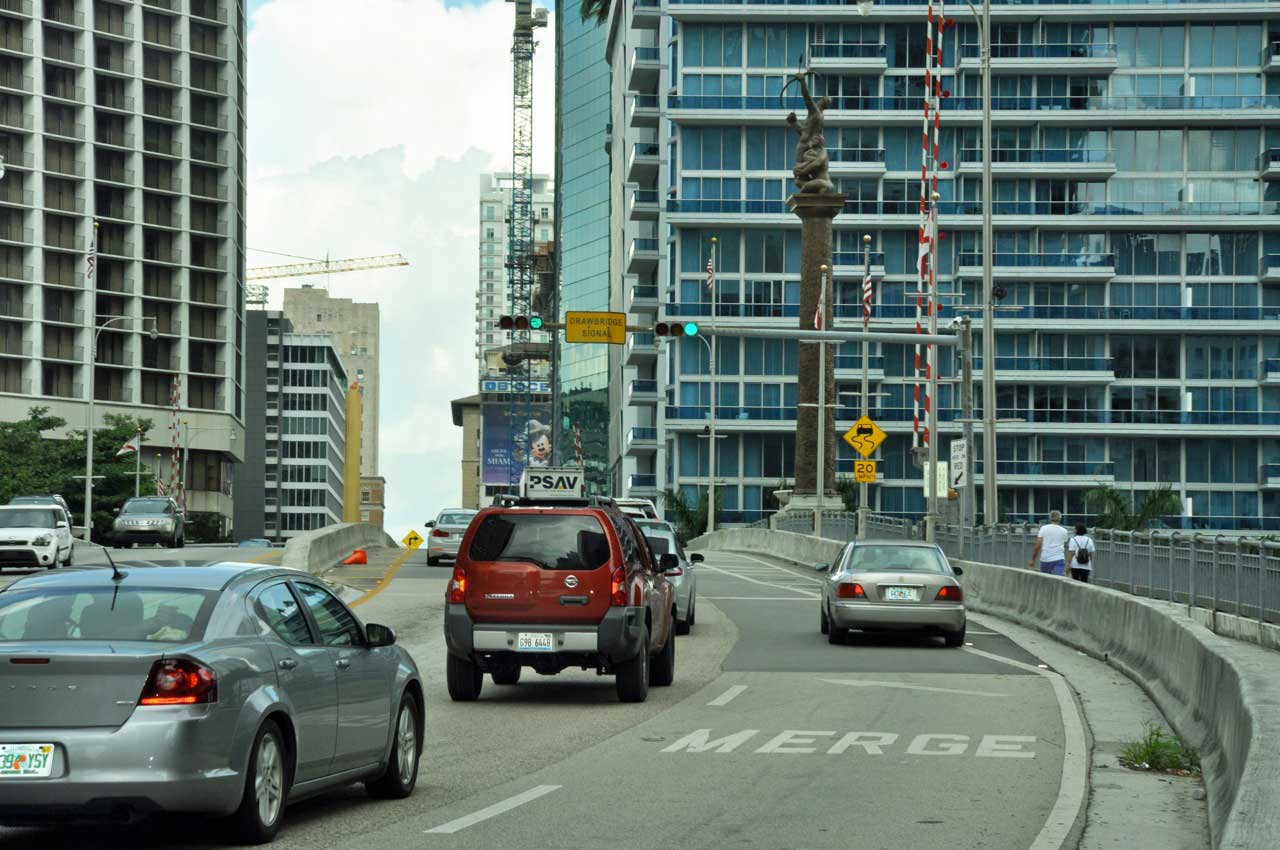 What started as an attempt to make bicyclists and pedestrians safer has mushroomed into a controversy that seems to have no resolution, observers say.
Several years ago, the Florida Department of Transportation floated four alternatives to calm traffic on and near the Brickell Avenue Bridge for the sake of those on bike or on foot, and also to protect buildings from errant vehicles.
Alternative 1 would have left all lanes on the Brickell Bridge as they were (three northbound and three southbound) and would have erected a barrier wall in front of the Wells Fargo Center on the north side of the Miami River. Alternatives 2 and 3 would have made changes to the right turn lane northbound and the left turn lane southbound. Alternative 4 was to modify a lane, either north- or southbound, or both. It was to be a trial program, the department said.
For reasons that no one seems to understand, the transportation department implemented alternative 4, closing a northbound lane. A sidewalk-widening project then consumed a southbound lane.
“I’m writing to express my opposition to FDOT’s current ‘trial project’ which resulted in the elimination of a northbound vehicular travel lane on the Brickell Bridge,” wrote Horatio Stuart Aguirre, chair of the Miami River Commission, on Aug. 12, 2013.
“The new need for drivers to merge from three lanes down into only two… while driving on top of the Brickell Bridge, makes backup longer and takes more time to restore traffic flow” after a bridge opening, said his letter, written to Gus Pego, then District 6 secretary for the state transportation department.
The project also included the installation of a pedestrian and cyclist crossing light at the north foot of the bridge, but a May 12, 2015, letter to Mr. Pego from Jose Felix Diaz, Florida House representative for District 116, says that hasn’t worked.
“I respectfully request that FDOT’s… alternative 4 be replaced with alternative 1, which would restore desperately needed vehicular lanes and still provide the safety improvement on, and adjacent to, the bridge.
“It is my understanding that the FDOT video camera focused on the northeast side of the bridge frequently views cars running the ‘no right on red’ traffic light when the pedestrian or [cyclist] is crossing the intersection, incorrectly thinking it’s their turn, because the traffic light is red and the flashing beacon is indicating that it’s safe to cross.
“On March 24, 2105, the MPO’s Bicycle and Pedestrian Advisory Committee passed a unanimous resolution to recommend that FDOT suspend [the project] pending an area-wide study of see the impacts of the lane reduction,” his letter said.
On May 12, 2015, Mr. Aguirre wrote again, this time to the Miami city commission. “The community has been begging FDOT to please restore the removed lanes on and adjacent to the Brickell Bridge, and replace it with FDOT’s alternative 1, which still provides safety improvements without the unintended and negative consequences.”
He attached letters of support from Joseph Bier, executive manager of the Epic Residences; and Bob Murray, general manager of the James L. Knight Center; attesting to the traffic snarls that have frustrated residents, guests and employees at the two properties.
Comments from the state transportation department were requested but not available by press time.