Advertisement
The Newspaper for the Future of Miami
Connect with us:
Front Page » Communities » Solutions offered to Brickell Bridge traffic woes 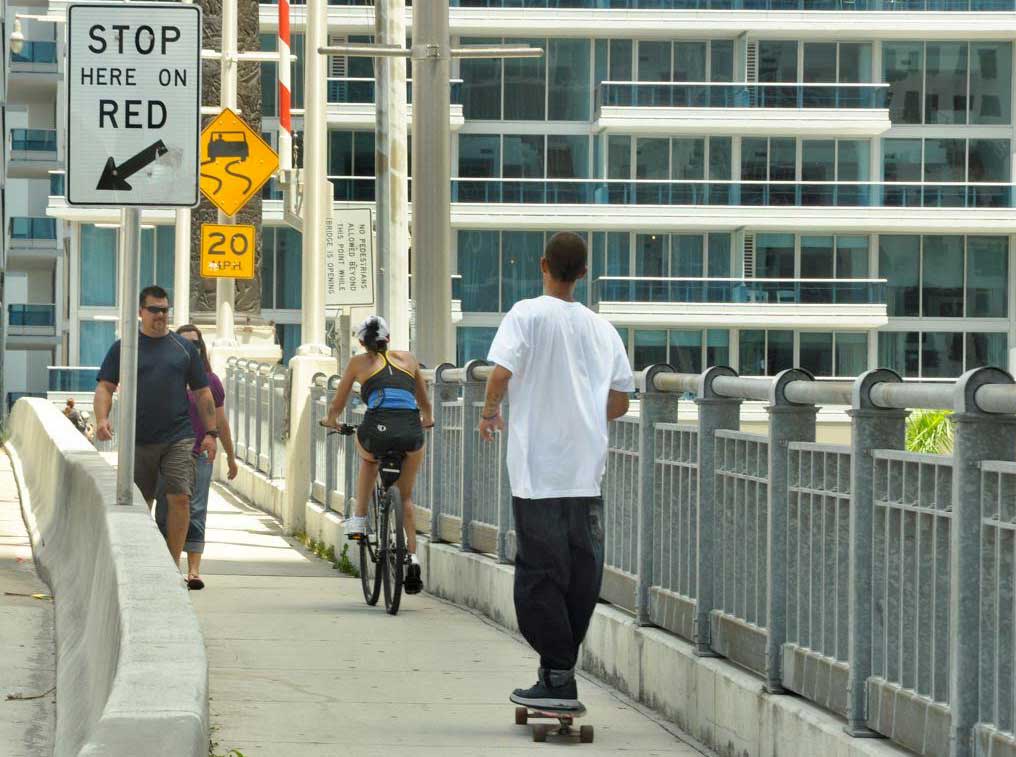 Frustrated by what it says are illegal openings of the Brickell Bridge that paralyze downtown, Miami’s Downtown Development Authority has petitioned the Florida Department of Transportation and the US Coast Guard to extend the hours during which the bridge is locked down.
But before extending the hours is even contemplated, 11 recommendations by the Miami River Commission (MRC) should be considered, said Phil Everingham, past president and current director or the Marine Council and its representative on the MRC.
The bridge is supposed to be locked down (except for vessel emergencies or ships being towed) between 7:35 and 8:59 a.m., 12:05 and 12:59 p.m., and 4:35 and 5:59 p.m. weekdays. The proposed rules would extend the morning and evening lockdowns until 9:30 a.m. and 6:30 p.m. respectively. During all other times, the bridge is to open only on the hour and the half-hour, and then only in response to a vessel request.
While he acknowledges that the often-discussed tunnel beneath the river is the best solution, “it’s quite a way off, at least five to 10 years,” Mr. Everingham said Monday. “Obviously, funding is going to be critical. Meanwhile, we need to deal with the issue.”
The transportation department has produced a study on the Brickell Bridge and related traffic congestion, and the US Coast Guard (with the University of Miami) is conducted a study, which should be done in the next 30 days, he said. Here are the MRC’s suggestions, some of which observers say could be done quickly and cost-effectively:
nEnforce existing federal bridge opening restrictions.
nInstall pedestrian traffic gates.
nRestore vehicular traffic lanes, which the state transportation department recently eliminated on the Brickell Bridge.
nDo not allow hotels on the north side of the Brickell Bridge to illegally block traffic for their valet or loading operations.
nSynchronize traffic-signal timing with Brickell Bridge operations.
nInstall “smart signage” that warns drivers of upcoming bridge openings before they are in bumper-to-bumper traffic.
nProvide the final permit for the What Up Bridge app, which provides bridge opening notices via text or email.
nRequire electronic automation of bridge-tender logs to insure accuracy, and post bridge-tender logs on a website or mobile app.
nResearch the placement of marine river traffic circulation signals to advise vessels of permitted and prohibited passage times.
nInstall bridge signage along the river and on the land side with closure hours, including the half-hour intervals.
“It wouldn’t surprise me if there were enforcement issues,” Mr. Everingham said. “If there are, they need to be addressed, no question about that.”
But, as has been pointed out by industry representatives, the traffic tie-ups on Brickell are not all related to the passage of ships.
Pedestrians who skirt the gates and cross the bridge after being given the signal that the bridge is opening are a problem, he said. Also, the state transportation department in 2013 closed one lane of traffic, forcing northbound motorists to merge from three lanes to two at the south foot of the bridge.
“We, as well as the condo associations and the hotels, adamantly opposed this, but our opposition seemed to fall on deaf ears,” Mr. Everingham said. Northbound traffic also is held up by delivery trucks that are double-parked and valet services that get backed up onto Biscayne Boulevard Way, he said.
The transportation department gave the What Up Bridge app (a product of a 2011 Downtown Development Authority Hackathon) a temporary permit several years ago, and it was wildly successful with drivers and residents timing their trips. But the department hasn’t finalized its permit, Mr. Everingham said.
The marine industry and casual boaters can help, too, he said. “It’s a two-way street. If boats would lower their outriggers and antennas, as they are supposed to do when approaching a bridge, that would reduce the number of times the bridge has to open.”
Some smaller boats “sneak through” in the wake of a larger vessel being towed, he added. “If that’s the case, they should be identified and fined.”
The MRC wants all of the stakeholders to gather at the same table, and for the industry’s concerns to be taken into consideration, he said. This will probably happen only when the Coast Guard and University of Miami finish their study and the transportation department has a chance to review it, observers say.
“We want a discussion,” Mr. Everingham said, “not to be told, ‘It’s our way or the highway.’ ”