Advertisement
The Newspaper for the Future of Miami
Connect with us:
Front Page » Government » Spat over law firm delays City of Miami multi-million-dollar deal 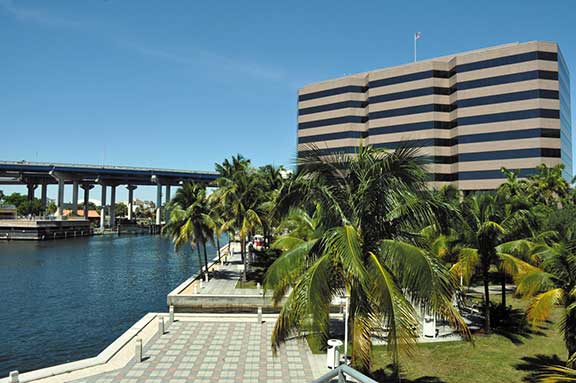 A multi-million-dollar deal to gain new offices for the City of Miami and open choice riverfront downtown to private development has been delayed.
It involves the lease or sale of the city’s riverfront offices – requiring voter approval – and any hope of having the deal ready for November’s ballot may be lost, said City Manager Daniel Alfonso.
Last week the city commission refused to hire law firm Shutts & Bowen as special real estate counsel to work in consultation with the city attorney on the sale/lease of the Miami Riverside Center and development of a new city administration building.
Those negotiations would be with Lancelot Miami River LLC, an affiliate of the Adler Group, chosen via a request for proposals.
Commissioners Frank Carollo, Francis Suarez and Ken Russell voted against hiring the firm. Keon Hardemon and Wifredo “Willy” Gort voted in favor. “They do have an awesome reputation in the legal community,” Mr. Hardemon said.
The move would have included waiving conflicts of interest. Conflicts cited in debate included the firm representing clients in real estate matters with the city, including at least one pending case. That the firm has hired former District 2 commissioner Marc Sarnoff was also cited as a conflict.
In December, the commission authorized Mr. Alfonso to start negotiating with Lancelot. The matter is so big and complicated that commissioners wanted an outside real estate expert to help the city negotiate the best deal.
Of 70 firms contacted, four expressed interest, said City Attorney Victoria Mendez. Besides Shutts & Bowen, one firm was not qualified, one represents Adler directly and one was from Palm Beach.
Grace Solares, a 2015 candidate for the District 2 seat, objected to hiring the firm because of Mr. Sarnoff’s role there.
Attorney Alex Tachmes of Shutts & Bowen said Mr. Sarnoff is not an equity partner and doesn’t share in the firm’s profits. He also said Mr. Sarnoff would not work on the city deal.
Mr. Carollo took care to point out he has no issue with Shutts & Bowen but cited a 2014 commission decision not to do business with law firms that have sued the city.
Mr. Tachmes said his firm, on behalf of a client, has appealed a city zoning decision in court but “it would have no impact on our ability to represent the city.”
Beyond the client conflict, Mr. Russell – current District 2 commissioner – had another objection: Mr. Sarnoff.
“I have to be very honest, he’s a good part of why I ran for this seat, because of the way he was handling many issues within our district. And anything that puts him closer back to this dais, I don’t think is positive for this city,” Mr. Russell said.
“The firm says they don’t want to play politics; they probably shouldn’t have hired a politician,” he continued. “I feel conflicted in this. I think this is a very important deal to the city. This is a very big expenditure, and that’s why I’m a ‘no’ on this.”
When commissioners approved a wider search for another law firm to help with the deal, Mr. Alfonso said there wasn’t enough time.
“This is a big deal,” said Mr. Carollo. “I’m not going to rush.”