Advertisement
The Newspaper for the Future of Miami
Connect with us:
Front Page » Government » Frustration builds on Flagler Street renovation 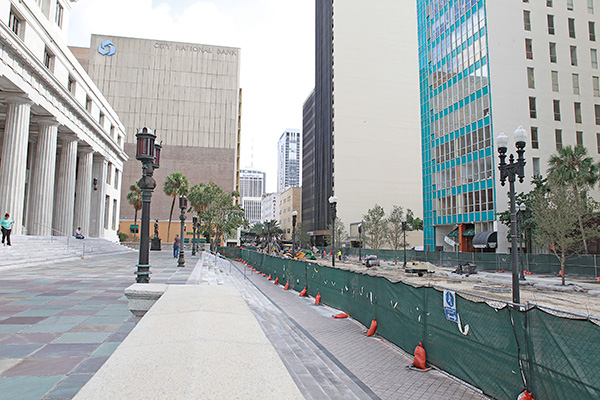 Frustrated with on-again, off-again progress on Flagler Street’s renovation from the Dade County Courthouse to Biscayne Boulevard, Miami’s Downtown Development Authority might consider hiring its own project manager. The idea was one of many discussed at the authority’s Friday meeting.
Though Miami’s Capital Improvement Program (CIP) is running the project, the downtown authority, stakeholders on the street, and Miami-Dade County – not the city – are footing most of the cost. Yet authority members say they have been barred from meetings and discussions about the renovation.
The authority and city have drawn up a memorandum of understanding that is be considered by the city commission today (3/23). It seeks to assure the authority a seat at the table, something authority members say is crucial.
“There is gross incompetence within the CIP,” said authority board member Gary Ressler, principal of the Tilia Family Of Companies.
“We know the CIP can’t handle this,” said authority board member Jerome Hollo, vice president of Florida East Coast Realty. “It’s a real problem. Maybe we can bypass some of the issues” by having a manager onsite. “We’ve got to get this moving.”
“The root problem is the request-for-proposals process,” said authority chair and Miami Commissioner Ken Russell. “It gives us a shallow pool to pick from.”
Chicago-based F.H. Paschen, or FHP, the contractor on the Flagler project, had already had a dispute with the city when it was chosen for the job.
“It’s not just that,” Mr. Hollo said. “If you don’t have a competent project manager onsite, it doesn’t matter who you pick.”
“Jerry is 100% right,” said authority board member Richard Lydecker, senior partner of the Lydecker -Diaz law firm. “You need a project manager if they’re just bird-nesting this.”
“There has been a great deal of progress since December,” said Alyce Robertson, authority executive director.
But “they are still stuck on one block,” said authority board member Jose Goyanes, owner of Metro Beauty Center and Churchill’s Barbershop.
There have been multiple problems on the project, including a maze of underground utilities that did not agree with site maps and other unforeseen obstacles.
Miami issued FHP two violation notices last fall because of slow progress on the project, which was several years on the drawing board before a shovel was ever turned.
The notices attracted the attention of the bonding company, and that appeared to trigger the progress spurt, said Brian Alonso, a principal in Lost Boys Dry Goods on Flagler Street who is also active in his family’s real estate business. He co-chairs the Flagler Street Task Force with authority Vice Chair Neisen Kasdin, office-managing partner of Akerman LLP.
FHP has now requested to set a new schedule, including an extension, to which the city has not agreed.
“We should be working with the city,” Mr. Russell said. “It should be the city and the DDA pointing our firepower at the contractor. Right now it’s a three-sided table, but we need to be aligned.”